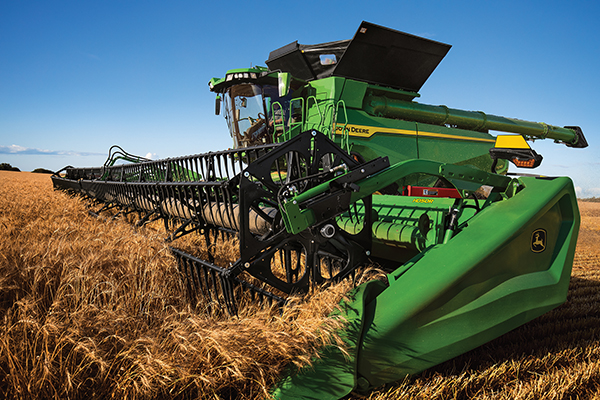 Agriculture has become increasingly mechanized over the past few centuries. As people migrate to cities and suburbs for better-paying, less strenuous and seasonal work, automation is essential to making up for the shortfall in labor. Robots, drones, and artificial intelligence are starting to help farmers plant seeds; apply water, fertilizer, and pesticides; and harvest with more efficiency and less waste than ever before. Examples include the robotics built into John Deere's latest machines, which can enable farmers to precisely manage their crops.

“People have certain perspectives of what robots are and aren't, but the reality is that robotics has played a key role in agriculture for the past 20 years,” said Jesse Haecker, business manager for planting, spraying, and nutrient application at John Deere. “By 2050, the world's population will be 9.7 billion, and global food demand will rise by at least 70%. We've got to drive 1.73% improvement in productivity annually on a similar amount of land to what's available today—that's macro driver No. 1.”

“Farming is not just driving back and forth on a field,” Haecker told Robotics 24/7. “It's not autonomous driving while on a cellphone. The farmer has to manage four to five things going on in the equipment behind the tractor, which is where most of the activity happens.”

“Farmers are the ultimate multitaskers and micromanagers,” he added. The reality is that the typical farmer is managing lots of tasks. The load is significant, and windows of time are very compressed. They're spending 18 to 20 hours in a cab managing not only a dozen tasks at once, but also 70 million plants in a field.”

“People do not realize that the number of people to do that work is going down all the time. There has been a 10% reduction since 2005,” said Haecker. “Robotics isn't just a nice application but is actually a necessity. Deere has been in this space for 20 years, so we have experience in how to guide vehicles and how to precisely conduct all these tasks.”

“Farmers are not just driving through the field,” he said. “We'll continue to automate those other tasks and reduce the burden on the operators. They're also the CEOs and doing the work of human resources, marketing, and purchasing.”

Is there such a thing as a “lights-out” or a fully autonomous farm in the near future?

“We believe that a 'human in the loop' is an important part of the next few years in agriculture,” Haecker said. “The technologies for autonomy have existed—adaptive cruise control, lane assist, obstacle avoidance, and self-parking—but that last mile of autonomous driving is really difficult for lots of reasons.”

“With multiple things happening simultaneously in a combine, integrating a consistent user experience in the cab is not only a differentiator; it's also necessary for the customer,” he said. “We're also trying to provide the right data and controls at the right times.”

Agricultural automation for precision and scale

Managing automation in a factory or warehouse can be difficult, but fields can be just as challenging, noted Haecker.

“To put things in perspective, farmers talk in terms of acres,” he said. (One acre equals 0.4 hectares.) “There's about 1.3 acres in a football field, and the typical farm is 4,000 football fields. To seed within a three-week window, equipment will cover one football field in a minute—that's 700 to 3,000 seeds per second. Robots can do that, and we can now locate seeds to within half an inch 99% of the time.”

“Advances in computer vision, machine learning, and electrification versus hydraulics have opened tremendous opportunities for robotics,” Haecker said. “We can now control things outside of a factory setting. Agriculture was a fast follower—from my seat in the ballpark, we're adopting the latest technologies as fast as they can come.”

How are improvements in sensors and analytics driving precision agriculture?

“For example, harvest operations are a real challenge for farmers,” explained Haecker. “One kernel of korn produces 500 to 800 kernels in return. Deere has leveraged computer vision and machine learning to monitor grain coming off the plant. The harvester make robotic adjustments to optimize throughput without cracking the kernels or gathering extraneous material.”

The X Series combines received a 2021 CES Innovation Award in the robotics category.

Last month, Deere & Co. launched its See & Spray technology. “It has 36 cameras and 96 nozzles to apply pesticides,” Haecker said. “With computer vision and machine learning, it can identify a weed less than an inch tall and spray pesticide in an area around it.”

“To use another analogy, a small pizza box is 1 sq. ft.,” he said. “At 2,000 feet-per-second coverage or one weed in 2,000 boxes, the robot could spray an area of four to six boxes rather than the whole area. That's not only beneficial to the bottom line but also sustainability.”

The system enables a farmer to control the amount of nutrients sprayed, droplet size, and even distance from the plants by automatically adjusting the volume, pressure, and height of the boom, which is attached to the sprayer and can measure up to 120 feet wide with nearly 100 different spray nozzles.

Could farmers obtain data from multiple devices, such as autonomous vehicles and drones, simultaneously? Can the Industrial Internet of Things (IIoT) apply to agriculture?

“We're on the cusp of doing things in sensor fusion,” replied Haecker. “We've been embedding modems for over 10 years, and we continue to invest in the cloud, smarter machines, and higher bandwidth of data.”

“We have a couple of machines that communicate with the outside world,” he said. “With our Operations Center, farmers can look into their operations in real time. It connects to other providers through APIs [application programming interfaces], including data from stationary and field sensors and weather information.”

Haecker said he welcomes the recent wave of interest in agricultural robotics and is not worried about competition. “Additional folks are becoming interested in the ag space, and they have contributions to bring,” he said. “Technology is unlocking new ways to solve problems.”

“At John Deere, we're interested in leveraging whatever it takes to make farmers as successful as possible,” Haecker said. “We invest more in research and development than anyone else in this space, and we think there's unique value for customers integrating this technology.”

How much can agricultural robotics benefit from developments in other autonomous systems?

“We monitor what's going on in energy, mining, and utilities,” said Haecker. “We have relationships with peers in those industries. We're all constantly pushing the limits of processing, autonomy, and cameras.”

“Since June of last year, we've invested in integration of technology to increase combine production to levels never seen before,” he said. “On the other hand, with See & Spray, we're really focused at the component level—cameras and high-performance CPUs and VPUs. It's bits of technology people know plus new technologies.”