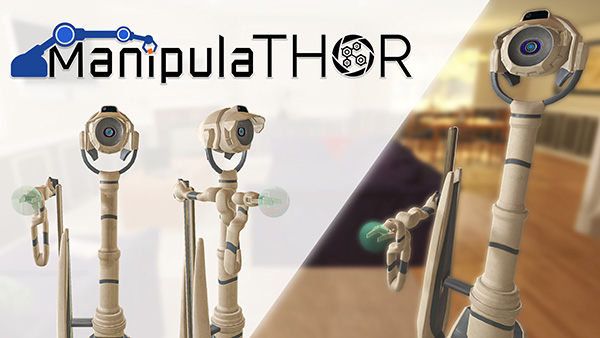 AI2
The Allen Institute for Artificial Intelligence is adding manipulation to its AI-THOR simulation project.
By Robotics 24/7 Staff
·

The Allen Institute for AI today announced Release 3.0 of its AI2-THOR embodied artificial intelligence framework, which now includes ManipulaTHOR for active object manipulation. The organization described ManipulaTHOR as “a first of its kind virtual agent with a highly articulated robot arm equipped with three joints of equal limb length and composed entirely of swivel joints to bring a more human-like approach to object manipulation.”

The Allen Institute for AI (AI2) said it conducts AI research and engineering for the common good. The Seattle-based institute was founded in 2014 by philanthropist and Microsoft co-founder Paul Allen and is led by Dr. Oren Etzioni, a leading researcher in the field. AI2 employs a diverse team of more than 150 people.

“Imagine a robot being able to navigate a kitchen, open a refrigerator, and pull out a can of soda,” said Etzioni, CEO of AI2. “This is one of the biggest and yet often overlooked challenges in robotics, and AI2-THOR is the first to design a benchmark for the task of moving objects to various locations in virtual rooms, enabling reproducibility and measuring progress.”

Despite being an established area of robotics, the visual reasoning aspect of object manipulation has been one of the biggest challenges for researchers. In fact, many have noted that robots struggle to correctly grasp, avoid collisions, and conduct long-horizon planning.

“After five years of hard work, we can now begin to train robots to perceive and navigate the world more like we do, making real-world usage models more attainable than ever before,” said Etzioni.

AI2-THOR provides researchers with complex simulated testing environments that they can use to train robots for eventual activities in the real world. The institute said ManipulaTHOR focuses on manipulation in complex scenes, joint manipulation and navigation planning, and generalization to unseen environments and objects.

AI2-THOR is the first testing framework to study the problem of object manipulation in more than 100 visually rich, physics-enabled rooms, AI2 said. By enabling the training and evaluation of generalized capabilities in manipulation models, ManipulaTHOR could enable faster training in more complex environments in comparison with current real-world training methods. Simulation will also be much safer and more cost-effective, claimed AI2.

“In comparison to running an experiment on an actual robot, AI2-THOR is incredibly fast and safe,” said Roozbeh Mottaghi, research manager at AI2. “Over the years, AI2-THOR has enabled research on many different tasks such as navigation, instruction following, multi-agent collaboration, performing household tasks, [and] reasoning if an object can be opened or not. This evolution of AI2-THOR allows researchers and scientists to scale the current limits of embodied AI.”

In addition to the 3.0 release, the team is hosting the RoboTHOR Challenge 2021 along with the Embodied AI Workshop at this year’s Conference on Computer Vision and Pattern Recognition (CVPR). AI2’s challenges cover RoboTHOR object navigation, ALFRED (for instruction-following robots), and room rearrangement.

AI2
The Allen Institute for Artificial Intelligence is adding manipulation to its AI-THOR simulation project.