Apple has acknowledged for the first time that it is investing in building a self-driving car, and in a letter to US transport regulators, Apple said it was "excited about the potential of automated systems in many areas, including transportation." 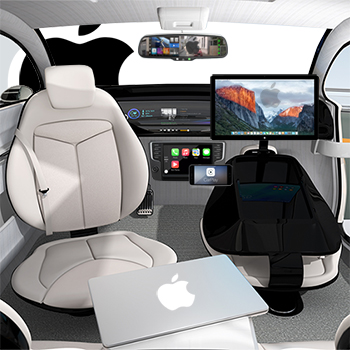 Last week, Apple wrote a letter to the U.S. National Highway Traffic Safety Administration telling it that “new entrants” to the auto industry should get the same rights as the established companies in the industry, reports VentureBeat.

In the letter, Apple admits to its interest in “machine learning and automation” as it pertains to transportation.

Apple uses machine learning to make its products and services smarter, more intuitive, and more personal. The company is investing heavily in the study of machine learning and automation, and is excited about the potential of automated systems in many areas, including transportation.

Apple points out that established car manufacturers do not have to pursue exemptions to the Federal Motor Vehicle Safety Standards when attempting to test cars on public roads due to the Fixing America's Surface Transportation (FAST) Act. New entrants in the auto industry, like Google and others, are not granted the same right under the FAST Act.

The Cupertino company argues that the best way to maximize safety benefits for autonomous vehicles, ensure fair competition and encourage innovation is for the NHTSA to amend policy to state that seeking exemptions isn't necessary for internal development vehicles on public roads.

The other half of the letter, which is dated November 22, addresses the Federal Automated Vehicles policy and a proposed data sharing program. “Apple agrees that companies should share de-identified scenario and dynamics data from crashes and near-misses,” the letter says.

“Data should be sufficient to reconstruct the event, including time-series of vehicle kinematics and characteristics of the roadway and objects.” Apple also points out that data sharing should not come at the expense of privacy, and that companies should invest resources to protect the “individuals' fundamental right to privacy.”

In October, it was reported that Apple was abandoning its car plans “for now.” After numerous layoffs and reassignments, the remaining members of the Apple Car team were said to be focusing on autonomous systems. Dozens of employees are also working on a car operating system in Canada. The letter was signed by Apple VP of Product Integrity Steve Kenner, who used to be Ford's Global Director of Automotive Safety. It's not known when Kenner joined Apple, as his LinkedIn still lists Ford as his employer.

Update: Apple issued a statement to Financial Times confirming the letter and Apple's interest in helping to define rules for self-driving vehicles.

“We’ve provided comments to NHTSA because Apple is investing heavily in machine learning and autonomous systems,” the Apple spokesman said. “There are many potential applications for these technologies, including the future of transportation, so we want to work with NHTSA to help define the best practices for the industry.” Download the Paper:  Accelerating the Next Revolution in Roadway Safety