The standards organization announced the next meeting of its F45 committee on mobile manipulation, as researchers continue investigating finray-effect grippers. 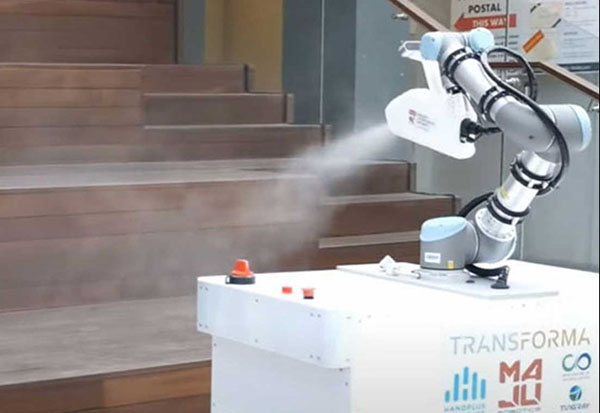 Universal Robots
Universal Robots has worked with Nanyang Technological University on applying mobile manipulation with its cobot to disinfection.
By Robotics 24/7 Staff
·

ASTM International’s F45 committee on robotics, automation, and autonomous systems committee has announced its next face-to-face meeting for April 19 and 20, 2023. It is developing a standard on mobile manipulator performance for static and indexed tasks.

Robotics manufacturers, suppliers, integrators, and end users could use the proposed standard (WK83858) to verify the performance characteristics of a mobile manipulator, said Omar Abdoul-Enein, a member of ASTM.

“Once approved, end users might use the practice to determine if a mobile manipulator can perform a given task—for example, peg-in-hole assembly—to their specifications and in their deployment environment,” he said. “Manufacturers may use it to have standardized procedures and reporting methods that can be associated with their product specifications and used to evaluate robot designs for improvement. Integrators may use the practice to determine implementation correctness within a facility during deployment.”

ASTM International said its proposed standard will describe accepted procedures and test methods, including the supporting test apparatus, for measuring the static/indexed task performance of a single mobile manipulator.

The West Conshohocken, Pa.-based organization defined a mobile maniplator as “a robotic system that features a manipulator using an automatic, automated, or autonomous unmanned ground vehicle (A-UGV) to move between locations.”

“Such systems may be used for manufacturing applications including but not limited to assembling, processing, or prototyping large scale components, material handling, machine/conveyor tending, flexible manufacturing and peg-in-hole insertion-type assembly,” it said. “Static/indexed performance encompasses situations in which the manipulator and A-UGV of a mobile manipulator shall not move simultaneously while physically connected as a single unit.”

ASTM said it welcomes membership and participation in the development of its standards, and remote working meetings of the F45 committee will occur monthly.

Mobile manipulators typically use collaborative robot arms, which are widely considered less precise than their industrial cousins. Improvements in end effectors could help them.

Scientists at Tufts University and Cornell University, as well as Beijing University, Nanjing University, and Zhejiang University in China, have been researching how compliant or soft grippers can be more precise. More rigid grippers are often used in manufacturing, but they have difficulty handling delicate items, such as electronics or household goods.

Richard Matthias Hartisch at the Department of Industrial Automation Technology at the Technical University of Berlin and Kevin Haninger at the Department of Automation at Fraunhover IPK last week released a paper on how a compliant finray-effect gripper can be used for high-speed robotic assembly of electrical components. This is particularly useful for installing cables in wire harnesses for electric vehicles, they noted.

“Fine assembly tasks such as electrical connector insertion have tight tolerances and sensitive components, limiting the speed and robustness of robot assembly, even when using vision, tactile, or force sensors,” they wrote. “A finray-effect gripper is adapted to realize structured (i.e. directional) stiffness that allows high-speed mechanical search, self-alignment in insertion, and sufficient assembly force. The design of the finray ribs and fingertips are investigated, with a final design allowing plug insertion with a tolerance window of up to 7.5 mm at high speed.”

In addition, Hartisch and Haninger noted that alternatives to fused-deposition modeling for additive manufacturing could create ribs with different structural characteristics, resulting in higher contact forces and less wear over time.

ASTM
Over 12,000 ASTM standards operate globally. Defined and set by us, they improve the lives of millions every day. Combined with our innovative business services, they enhance performance and help everyone have confidence in the things they buy and use.