Bespoke Manufacturing, a U.S. apparel manufacturer, will use Zebra's automation to fast-track workpieces and scale its business. 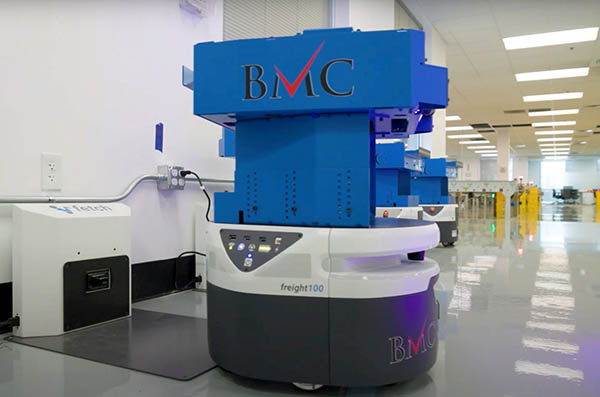 “With Zebra’s unique solution, we are able to realize significant savings in labor time while retaining an ability to instantly scale up to meet seasonal demand surges and seamlessly modify our production,” stated J. Kirby Best, president and CEO of BMC. “I am particularly proud that Zebra’s smart and innovative solution allows us to create and keep manufacturing jobs in the U.S.”

“I've watched for years as companies chased the lowest labor costs to China, Vietnam, India, and now Africa,” he told Robotics 24/7. “It raised questions about whether that was the right thing to do on many levels. A lot of companies fooled themselves into thinking that a lower per-unit cost was always better.”

“How do we show it can be less expensive to manufacture here and increase options?” Best asked. “We started looking at what we could do to disrupt the fashion industry. Women's dresses face sizing issues, for instance, but computers could generate patterns to do a half size or a different-size bodice from skirt.”

“We looked to offer a totally different experience or product on demand and looked at technologies such as robotics to be competitive with offshore manufacturers,” he said.

With a background in book production, Best founded Bespoke Manufacturing, which uses specially programmed lasers to cut multiple pieces, which are then sent to totes for sewing in reverse sequence. He explained that BMC initially used conveyor belts to send articles to different workers, but they were inflexible.

Through past contacts, Best met Justin Ray, director of advanced technology at S&H Systems. The integrator is a registered reseller and a new member of the Mobile Robotics Specialization within Zebra’s PartnerConnect program.

Ray worked closely with Best to design and implement the automated processes.

“For example, we would look at three putwalls and evaluate their capabilities and price,” Best recalled. “We've written most of our code ourselves, but as it got more complex, more parties and things got subbed out. I'm very happy so far.”

“Robotics and machine vision are emerging technologies that increase the efficiency and productivity of front-line workers, but many businesses do not have the internal knowledge to adopt this technology,” said Ray. “We understand how to efficiently implement a spectrum of technologies to save costs and increase efficiencies and, in the case of BMC, when combined with Zebra’s proven solutions, streamline the production process for our manufacturing clients.”

“We started looking at things three years ago,” said Best. “One of the biggest issues we saw in this industry is that it's very siloed between designers, pattern people, brands, and manufacturers.”

“Communications among all of them is horrible at best—inconsistent and unstructured,” he added. “We want brands to see where their products are, from the design stage to manufacturing to the customer doorstep. We also needed visibility into inventory.”

“We had been in touch with Fetch way before this,” noted Best. “Since it's also an American company, we wanted them to be onsite.”

Zebra Technologies said its ecosystem includes more than 10,000 partners across over 100 countries. The Lincolnshire, Ill.-based company claimed that it serves customers of all sizes—including 84% of the Fortune 500—with hardware, software, and services to digitize and automate workflows.

Zebra recently expanded its industrial automation portfolio with its $290 million purchase of Fetch Robotics. It also increased its machine vision, artificial intelligence, and software capabilities with the acquisitions of Adaptive Vision, antuit.ai, and Matrox Imaging.

“This is the first time since Fetch has been acquired that we're bringing together Zebra and Fetch products,” said James Lawton, vice president and general manager of robotics automation at Zebra. “The combined power of our solution elevates human and robotic performance by augmenting capabilities and coordinating work and movement in real time, resulting in faster fulfillment, timely replenishment, and autonomous movement of material for higher efficiencies and customer satisfaction.”

Zebra said its systems will improve visibility into Bespoke Manufacturing's workflows to increase efficiency and allow the manufacturer to scale up to meet growing demand.

The FetchCore software directs the robots to advance articles of clothing from one destination to the next, all the way to the packing and shipping stage for finished products.

“Printing, cutting, and sewing custom apparel has to be accurate and fast.” Lawton said. “BMC's systems manage traffic, and FetchCore orchestrates which robot goes where to efficiently manage where or to whom materials go. It assigns an AMR to pick up a tote of sleeves, and then to another for adding a pocket.”

In addition to providing more visibility, Zebra's systems can collect valuable data, but determining how much and what data to use can be challenging, Best said.

“We can get almost every bit of information anyone had ever dreamed about each production cycle per garment, but that's way too much to analyze,” explained Best. With 800 customized one-off dresses a day, we have to figure out ways to analyze and simplify the information so it's meaningful.”

“It takes time and thinking,” he said. “In Formula 1 racing, drivers used to have lots of dials to watch; now they only get information as they need it. We've taken that approach. We have this rule where 80% of a report has to be usable to make a decision, and 20% can be for amusement and amazement. It might trigger a different way of thinking of things, and we now have information that has never been seen before, from design to manufacturing.”

“Reducing the cognitive load on the user is an important driver for robotics adoption,” said Lawton. “Previously, only the large automakers had engineers with the expertise to use robots.”

“The toughest lesson we continue to learn is that you have to do something on a certain scale before you can learn enough lessons for it to make sense,” Best said. “It's a fine line between deploying systems on scale that you can't walk back and having large enough scale to make decisions.”

“For example, Fetch had warned us that a one-way street might be more efficient than a two-way aisle,” he noted. “I just wanted a robot not to go 300 to 400 ft. but two stations down. However, there were more interactions, causing two to three robots to stop and dance, while they could have gone all the way aoround.”

“In general, the reaction from employees has been quite positive,” said Lawton. “People are doing less of the things they don't like, such as spending 50% of their time moving materials on carts, and are doing interesting things that require their skills, like sewing. People are really good at dexterity, creativity, and innovation. When I walk around a site, I gauge who's not smiling—could a robot help them?”

BMC plans to grow across its existing and planned manufacturing sites to meet seasonal production surges and growing demand for personalized products.

“Robotics are a whole new world, and Fetch has never done a project like this,” Best said. “Everybody has been accommodating in understanding one another's issues. We've created something that nobody else in the world has done on this scale.”

NFI to Pilot Boston Dynamics Stretch Robot at Georgia Warehouse Next Year as Part of $10M Deal
The company said it regularly tests out new technology in specific locations before adopting it throughout its network of facilities.