Collaborative robots are becoming a bigger part of the manufacturing pie, helping workers and educators.

ABB has four models of cobots, including the dual-arm YuMi, the single-arm YuMi, the GoFa CRB 15000, and the SWIFTI CRB 1100.
By Cesareo Contreras
·

As the manufacturing workforce gets older, the complexity of tasks on assembly lines increases, and the labor shortage continues, more and more companies are turning to collaborative robots, or cobots, to help fill in the gap.

Cobots can work alongside humans and are easier for the end user to control. Their relatively small size and safety sensors allow them to fit in more places, and they can be easily programmed to complete repetitive tasks. Ideally, they free up time for human workers to tackle other more complicated problems and allow facilities to operate more efficiently.

Stellantis, an auto manufacturer that was formed after the merger of Fiat Chrysler Automobiles and PSA Group, is taking advantage of 11 collaborative robots in one of its electric car factories in Italy. From applying waterproof liners on vehicle doors to the mounting of hoods, the robots have become a major part of the process.

“For us, UR technology is a guarantee of a particularly advanced man-machine interface perfectly matched with the group's quality requirements in terms of both production processes and products,” said Ennio Meccia, head of manufacturing chief engineers at Stellantis.

The cobot market is estimated to reach $1.71 billion by the end of 2022 and have a valuation of $8.65 billion by 2029, according to a recent study by Future Market Insights.

Other manufacturers connect with cobots

One of the biggest applications of collaborative arms, as of late, has been arc welding, said Joe Campbell, senior manager of strategic marketing and application development at Universal Robots. Arc welding involves connecting pieces of metal electrically and is often used by metal fabricators.

“In our world, it’s three times bigger than it was a couple of years ago,” he told Robotics 24/7. “It’s actually a little over 6% of our total volume. That’s new, and it’s continuing to grow every month.”

While Universal Robots may be leading the charge in collaborative robot production, other robotic manufacturers are following suit, including some of the big players in the industrial-robotic space.

Cobots are increasingly becoming a bigger part of the manufacturing pie, according to Joe Chudy, general manager at ABB Robotics. The Zurich, Switzerland-based robotics vendor has four models of cobots, including the dual-arm YuMi, the single-arm YuMi, the GoFa CRB 15000, and the SWIFTI CRB 1100.

ABB's GoFa and SWIFTI, which were released in February 2021, offer higher payloads than both versions of the YuMi, with payloads of 5 kg (11 lb.) and 4 kg (8 lb.), respectively.

ABB's cobots are used in small and midsize assembly, polishing, welding, machine tending, packaging and kitting, inspection, and laboratory automation, according to Chudy. He claimed that no programming expertise or specialized training is needed to use the cobots. 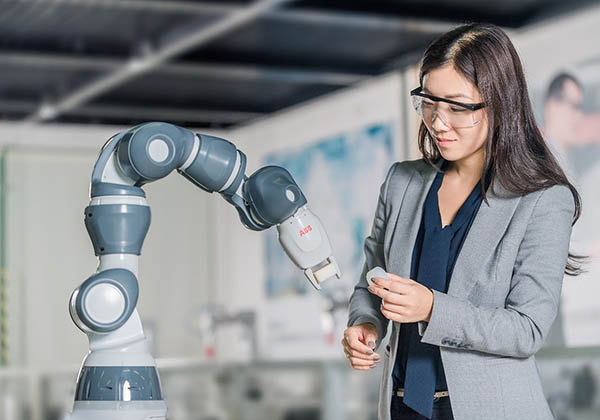 Cobots such as the single-arm YuMi are designed to be easy to program. Source: ABB

ARC Robotics, a certified supplier of FANUC robots in the Czech Republic, outfitted the University of West Bohemia’s mechanical engineering department with a robotics workspace using a six-axis FANUC CR-7iA/L cobot. The company also installed a camera and gripper.

Noteworthy applications of FANUC’s cobot robots include worker training and research into more uses for cobots in production.

“The publishing platform provides a research communication outlet of innovative technologies for technicians, researchers, scholars, and experts who are working in the field of collaborative robots,” said AUBO and F1000.

Francis Huang, division director of AUBO Robotics, said the company launched the platform because it felt an obligation to provide a place for cobot research, given its prominence in the cobot space in China. The company also sees the platform as an opportunity to better reach the western market. 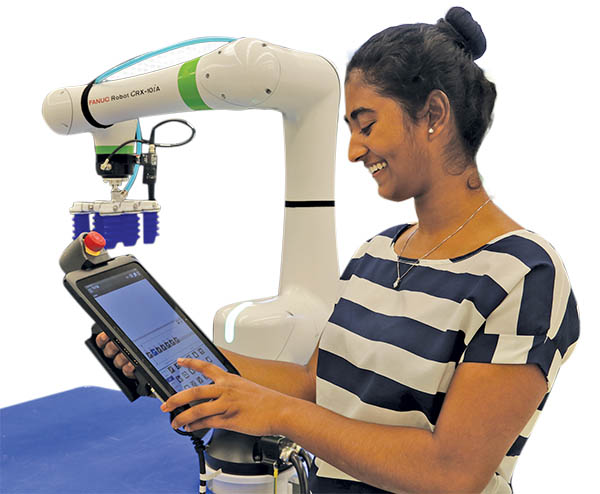 The FANUC CRX-10iA can be used for applications including machine loading, inspection, and packing. Source: FANUC

“In a leading position among the industry, [we thought] there was something more we could do for this industry because many people still don’t have a very clear concept about collaborative robots versus industrial robots,” Huang told Robotics 24/7. “There are a lot of things cobots can do that people don’t know about.”

Over the past 18 months, Universal Robots has also expanded its teaching efforts into 89 training centers around the world, Campbell said. The company has also created a teaching curriculum that is being used in more than 40 schools in North America, including universities, vocational schools, high schools and middle schools.

Some of the biggest challenges ahead include increasing the amount of weight collaborative robots can move and their range, said Campbell. He mentioned that the company recently increased the payload of its No. 1 model, the UR10e, to 12.5 kg (27.5 lb.), a 25% increase.

“It’s difficult with a collaborative robot because there are speed and force limitations that you have to watch to make a cobot safe,” he said.

But Campbell said cobots will keep growing, expanding, and disrupting the manufacturing industry.

“We have many partners who deliver total systems for $85,000,” he said. “That’s about a third of a cost of a traditional system.”

8 Interesting Cobot Providers From Around the World
From Universal Robots and ABB to Doosan Robotics and Neura Robotics, here is a look at some top collaborative robot...