With fleets of robots and AI, farming could become a distributed, white-collar profession, says Anton Emelyanov. 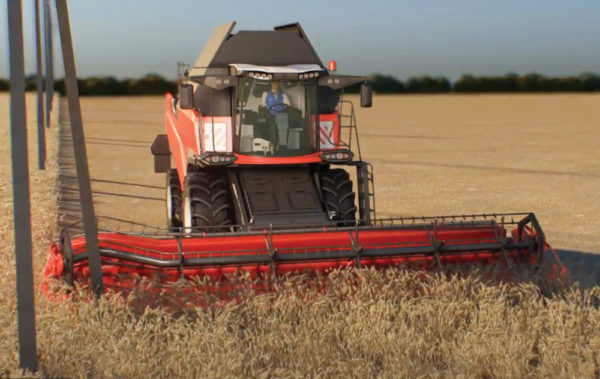 Cognitive Pilot
Cognitive Pilot is starting to offer its autonomy kit for harvesting and spraying worldwide.
By Eugene Demaitre
·

The world's population will grow from 7.7 billion today to 9.7 billion in 2050, according to the United Nations. Growing and distributing enough food will be a challenge because of worker shortages, not to mention challenges posed by natural disasters, global climate change, and international conflict. Cognitive Pilot is among the companies developing autonomous systems to address these challenges.

“We analyzed long-term trends and found that after 2009, more than half of the world's population lives in cities, meaning that the majority of people could find food only in their refrigerators or on store shelves,” said Anton Emelyanov, co-founder and chief technology officer of Cognitive Pilot. “On the other hand, the cultivated land area per person is going down because of the scale of population growth. The role of the agriculture business is critical.” 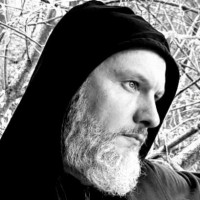 Cognitive Pilot is a joint venture of Russian lender Sberbank and Cognitive Technologies Group. The Moscow-based company is developing artificial intelligence and machine vision for autonomous vehicles. Its Cognitive Pilot/C-Pilot multiplatform autonomous driving system is used in agriculture, rail transport, and urban tranisit. In addition to software, Cognitive Pilot develops its own radar and sensors.

“There's a lot of focus on autonomous vehicles for applications from robotaxis to autonomous ships,” Emelyanov told Robotics 24/7. “We selected fields where we think we could get more reliable advantages in terms of business strategy.”

“We analyzed prospective applications and found that agriculture is the most promising for several key points,” he explained. “The ratio of autonomy to the total price of the vehicle—about 5%—could be quite appropriate for economic models and ultimately profitable for end users.”

“A second point is that agriculture is easier in terms of regulations,” acknowledged Emelyanov. “We're in the market right away with our product. Companies like Waymo and Cruise have to go a long way to prove the safety of their solutions for public transport.”

At the same time, Cognitive Agro Pilot can benefit from advances in autonomous driving. “We are compliant with all trends,” Emelyanov said. “Everybody uses cameras; we also use radar. We are using the most modern approaches in machine learning algorithms to provide reliability while at the same time providing a functional product for customers.”

“On the other hand, we're also using some human-based approaches to AI to make our system more simple and understandable for users,” he added. “As with any company, we're fighting to reduce the bill of materials to make our product more appealing to customers.” 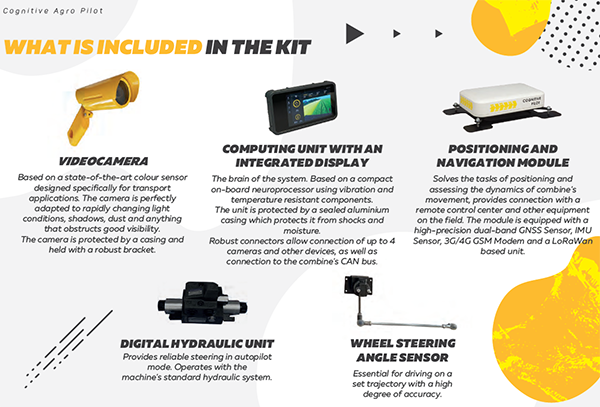 “We generally use two sensors,” explained Emelyanov. “The first is a video camera. An artificial neural network with some post-processing algorithms builds up a dynamic picture of the general surroundings, providing a trajectory for vehicle motion.”

“We also focus on radar because of several challenges,” he said. “There's quite a debate over lidar versus radar, but agricultural machinery operates in harsh conditions, with dust, hay, and earth. They could significantly decrease visibility.”

“Another challenge is the changing landscape,” Emelyanov added. “To understand highlands and evaluate the geometry of the path quite precisely, it's necessary to provide distances with a high grade of reliability at twilight or in rain, snow, or hail.”

“When it comes to sprayers, most of the time, they're operating at night to avoid sunlight on the leaves, and the wind is lower,” he noted. “The sprayer needs to avoid poles and trees in the dark, especially when the sprayer 'wings' are 40 m [131.2 ft.] wide.”

“With a combined approach, signals from devices support each other to provide superhuman results in terms of perception—they can see in complete darkness,” said Emelyanov. This approach is different than relying on GPS or mapping, and 5G networking has yet to come to most rural areas.

“Farmers often have separate vehicles for different processes— such as soil treatment, spraying, and harvesting—that they rarely use together,” Emelyanov said. “We are now working with combine harvesters, but there will be applications in tractors and sprayers in the next year.”

“We want to cover all the most popular agricultural machines,” he said. “Our concept is like Star Wars' R2-D2, which could be mounted on different vehicles with a standard cradle, to provide more value to our customers.”

Why did Cognitive Pilot decide to provide Cognitive Driver as an add-on rather than build autonomy directly into farm equipment?

“Agricultural machines have quite a long life cycle—tractors and harvesters are generally used for about 10 years,” replied Emelyanov. “By modifying vehicles in service into smart robots with our system, it allows us to go to end users without OEMs.”

“Staying compatible with different tractors is quite a job,” he said. “There are several leading tractor brands in the world, and they range from low-end to top models, with a lot of internal differences. We are constantly getting details of the differences to build up an appropriate installation set and increase the range of vehicles we can cover with Cognitive Pilot.”

While some vendors such as John Deere are building autonomy into their equipment, Cognitive Pilot is focusing on processes and controls.

“When autonomy is built in, it's easier, but such features are only available in top models,” said Emelyanov. “We're trying to be more affordable for widely used models, making the transition easier.”

“An agricultural vehicle is actually mostly not a vehicle; it's a small plant on wheels,” he said. “We focus on the processes that they perform. That's why we have intelligent controls of grain and the position of sprayers.”

“Our target is to get to fully autonomous vehicles that can be supervised by a remote operator, because another problem is a shortage of workers,” Emelyanov said. “One qualified person could supervise several vehicles remotely, making farming a white-collar job and opening access to more people.” 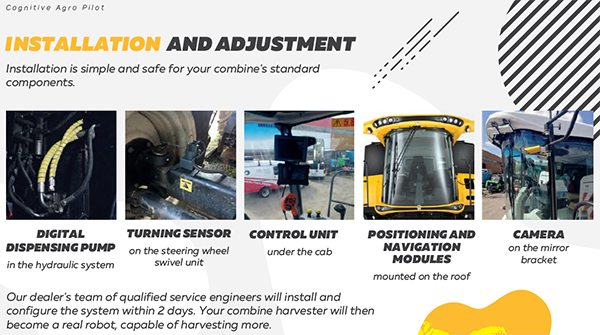 Market for agbotics is growing

The global market for autonomous farm equipment is growing, according to several analyst firms. It will experience a 10% compound annual growth rate (CAGR), reaching $150 billion (U.S.) by 2031, predicted Fact.MR. Similarly, The Business Research Co. forecast a CAGR of 15%, with the market growing from $62.31 billion in 2020 to $127.3 billion in 2025.

Research Dive said the agricultural robot market could grow from $4 billion in 2018 to $16.6 billion by 2026 at a CAGR of 19.2%. Research and Markets was even more bullish, estimating 33.5% CAGR by 2026. However, that growth still requires education and outreach.

“We are working with a highly segmented market,” said Emelyanov. “There are maybe five to six top markets in terms of producing basic classes of food—wheat, corn, soy, and rice. All of these markets are huge in terms of the number of customers and vehicles.”

“There are 100,000 potential customers in Russia, the U.S., Canada, Argentina, and Brazil,” he stated. “It's maybe more complicated in the EU, and another prospective market is Australia.”

“For example, we have a strong domestic market, and Russia is one of the top five producers of wheat,” he stated. “In Russia, there are about 60,000 combine harvesters that would be appropriate for modifying and 100,000 tractors. The U.S. is 10 times bigger, with the number of registered combine harvesters at 660,000 units, and more than 1 million tractors.”

What about China? “It's a bit complicated, because it's a huge market, but most leading companies are owned by the government,” Emelyanov said. “It's a good idea to scale our business and implement our business models in similar markets with less risk.”

Cognitive Pilot soon plans to start selling its new Gen2 system, which combines the AI box and display and will be available for both tractors and sprayers, in the U.S. The company has also joined NVIDIA's Inception AI incubator program. In addition, it plans to begin sales in Brazil and Argentina by late this year or early in 2022.

“This summer, because of COVID-19, we're planning to arrange online streams from the field in different languages to show how our robots actually work,” said Emelyanov.

A vision of future farming

Not only is technology changing how farmers manage crops; it's also changing the nature of the business, according to Emelyanov.

“The farmer used to own his land and his machines, and he took on all the risks of food manufacturing, defined by time spent seeding, spraying, and harvesting,” he said. “He would use his own experience and that handed down by his Uncle Frank.”

“Within the past five years, the European Space Agency has released open satellite pictures of all the fields in the world, which is valuable for deep learning analysis. It is develping very quickly,” Emelyanov said. “We can now analyze field vegetation and all parameters to make future harvests more predictable. On the other hand, when there are robots on the field, we could more completely calibrate their focus in contrast to satellites, with a closer view of plants to get very detailed harvest predictions.”

“The next point is a portfolio of lands, going the way of financial markets,” he suggested. “Like with stocks, one obvious step to hedge from weather changes is to spread out fields and equipment in different climate zones. This approach allows for predictable ROI [returns on investment].”

“Now, farmers are largely by themselves, but in the future, they could be third-party contractors with fleets of autonomous robots,” Emelyanov said. “This is a different model of farming, and the technological achievements are ahead of society's perceptions. This is a really an exciting moment.”