Elite Robots to Showcase New Class of Cobot at Automate 2022 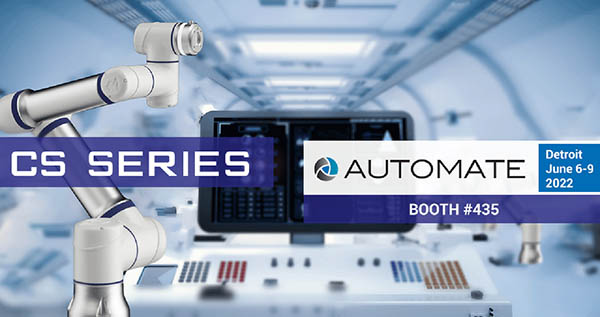 This week, Elite Robots announced that its new CS Series collaborative robots will be showcased at a number of upcoming exhibitions worldwide. The new cobots will be first shown at the Detroit Automate show, which will be held from June 6 to 9 in the Huntington Place Convention Center.

The applications include (but are not limited to) material handling, visual inspection, assembly and tightening, machine tool loading and unloading, packaging and palletizing, welding, and cutting, the company said.

Designed to work across industries

The cobots are designed to be used across sectors such as automotive, 3C electronics, food and beverage, metal processing, paper converting, home appliances, power, and education, it added.

CS stands for “Cobot Superior.” The Shanghai, China-based company said the CS Series features all the advantages of the previous EC Series and more.

Elite said the new series embodies the flexibility and openness of a new generation of collaborative robots. The new series is based on the “platformization” concept, according to the company. It was designed and manufactured by applying the so-called “4-S principle”—simple, safe, scalable and sustainable—it added.

The company will exhibit at Automate Booth 435. It did not specify where the CS series will be showcased after Automate in its announcement.

Cobot market leader Universal Robots will also have a presence at the show, recently noting that more than 30 booths throughout the venue will have its robots on display or in action.

10 Noteworthy Robot Exhibits at Automate 2022
A look at some of the interesting robot systems we saw at the show, from Epson's GX Series of SCARA...
More Cobots