Companies to collaborate in freight markets across the U.S. Sun Belt in advance of Embark's 2024 commercialization. 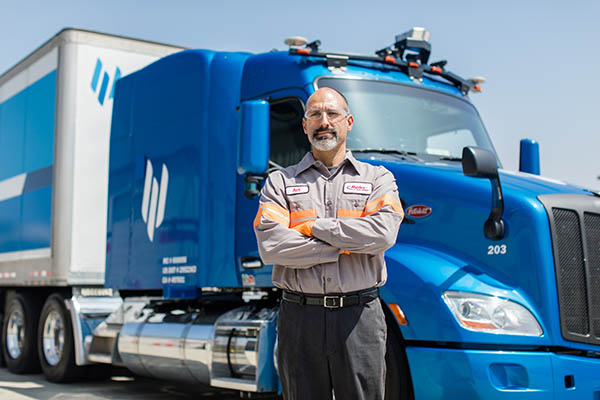 Business Wire
A Ryder technician in front of an Embark autonomous truck in Riverside, Calif.
By Robotics 24/7 Staff
·

Embark Trucks Inc., which is developing autonomous technology for the trucking industry, last week announced that it has partnered with Ryder System Inc. The companies plan to launch a nationwide network of up to 100 Embark transfer points, where Ryder will provide yard operations, maintenance, and fleet management to support a seamless coast-to-coast autonomous network for Embark fleet partners.

Founded in 2016, Embark claimed that it is the longest-running, self-driving truck program in the U.S. The Belmont, Calif.-based startup said its software can improve the safety, efficiency, and sustainability of the nearly $700 billion-a-year trucking market. The company has collaborated with major U.S. shippers and carriers, collectively representing over 30,000 trucks.

In June, Embark announced plans to merge with special-purpose acquisition company (SPAC) Northern Genesis Acquisition Corp. II, raising $614 million, and to list on the NASDAQ in the fourth quarter of 2021.

Embark said it pioneered the transfer-point model in 2019 when it unveiled its first sites in Los Angeles and Phoenix. Since then, the company has conducted hundreds of hauls through these sites, refining required transfer-point capabilities and evaluating a range of service providers to fulfill those capabilities.

Through its partnership with Ryder, Embark plans to establish a network of strategically located transfer points—where freight is moved from driverless long-haul trucks to driver-enabled trucks for first- and last-mile delivery. Ryder will operate the transfer points, managing the logistical operations throughout the yard, performing pre- and post-trip inspections, and providing maintenance services for the vehicles as well as the autonomous hardware.

Initially, the partnership will focus on developing select sites in key freight markets in California, Arizona, Texas, Georgia, Tennessee, and Florida, through which Embark plans to begin hauling loads in early 2022 in preparation for a larger commercial launch in 2024.

Over the next five years, working with a network of real estate operators, the two companies aim to open as many as 100 Embark transfer points nationwide.

“The path to commercial adoption of autonomous trucks involves quite a bit more than integrating the technology that allows vehicles to drive safely on their own,” said Karen Jones, head of new product innovation and chief marketing officer at Ryder. “Someone needs to inspect the vehicles to identify potential problems, provide maintenance support, service the autonomous hardware, and coordinate load hand-offs, among other things. Through this partnership with Embark, we’re able to leverage nearly 90 years of Ryder’s operational expertise to support Embark’s growth plan.”

Ryder has also been working with other autonomous truck developers, including TuSimple Holdings Inc. and Waymo Via, the trucking division of self-driving car maker Waymo.

Business Wire
A Ryder technician in front of an Embark autonomous truck in Riverside, Calif.