Flytrex plans to use its latest $40 million round to scale up its drone delivery service nationwide. 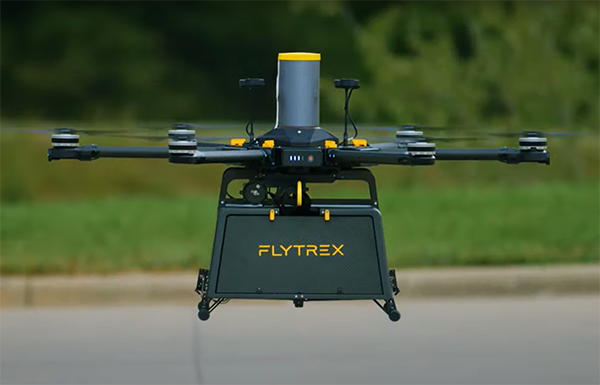 Flytrex
Flytrex plans to expand its B2C drone delivery service across the U.S.
By Robotics 24/7 Staff
·

Drone deliveries got a boost today, as Flytrex Inc. announced that it has raised a $40 million Series C round, which brings its total funding to $60 million. The Tel Aviv, Israel-based company said it will use the funds to ramp up its expansion across the U.S. and advance partnerships with leading retailers and quick-service restaurants.

“On-demand drone delivery has skyrocketed since the pandemic began and is becoming much more mainstream, much faster than expected,” said Yariv Bash, co-founder and CEO of Flytrex. “We’re excited to continue working with the FAA, the North Carolina Department of Transportation, and others to bring swift, affordable, and sustainable on-demand drone delivery to more partners, communities, and consumers across the country.”

Flytrex’s funding round came after recent service expansions in the “First in Flight” state. The company began operating in September 2020, delivering groceries, household items, and restaurant orders to select customers in Fayetteville, N.C. Since then, it has expanded drone deliveries to the town of Raeford, N.C.

Since February 2021, Flytrex said the volume of its orders across its North Carolina operations has increased more than tenfold, with thousands of deliveries to date. It claimed that it can deliver orders within five minutes in a two-and-a-half mile radius.

Most recently, the startup launched its third drone-delivery station in North Carolina. It has been delivering food orders from restaurants and chains at the Holly Springs Towne Center, including from It’s Just Wings, Brinker International’s virtual brand available from Chili’s Grill & Bar and Maggiano’s Little Italy, to residents’ backyards.

“We are committed to supporting companies that have the potential to change people’s lives for the better, and Flytrex’s impact on retailers and consumers alike fits that mission perfectly,” said Eran Barkat, partner at BRM Group. “Drones are playing a key role in revolutionizing last-mile delivery for communities around the world, and we are thrilled to support the Flytrex team as they take the future of food and household delivery to new heights.”

The company participated in the U.S. Federal Aviation Administration’s Unmanned Aerial System (UAS) Integration Pilot Program (IPP), which ended in October 2020, and its successor, the BEYOND program. Flytrex added that it is continuing to work with the North Carolina Department of Transportation to help address the remaining challenges of UAS integration.

Flytrex
Flytrex plans to expand its B2C drone delivery service across the U.S.

Flytrex Raises Series C Funding to Expand Rapid Drone Delivery Across the U.S.
Flytrex plans to use its latest $40 million round to scale up its drone delivery service nationwide.

Flytrex
Flytrex is the 1st company in the world to offer complete end to end drone delivery solutions. From autonomous delivery drones to the cloud platform that automatically manages flights while being aware to topography, man made objects, weather and more - Flytrex supplies a complete tailored solution....