German robotics and automation suppliers said they expect a 6% increase in orders for the year, according to the Mechanical Engineering Industry Association. 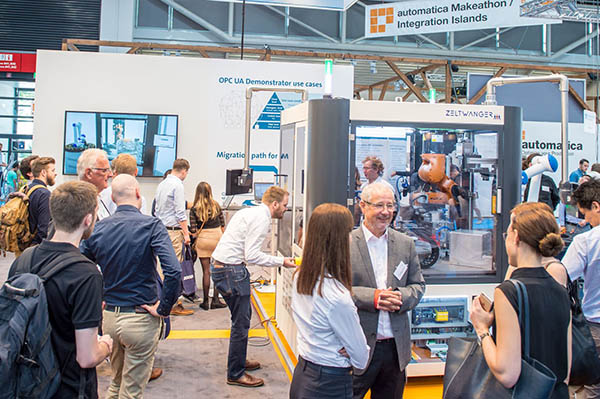 Messe Munchen
Automatica returns to Munich this week after disruptions from the COVID-19 pandemic.
By Robotics 24/7 Staff
·

As Automatica convenes for the first time in four years this week in Munich, demand for robots is booming in Germany, according to the country's Mechanical Engineering Industry Association, or VDMA.

In the first four months of 2022, incoming orders rose by 38% in comparison with the previous year, it reported this week. In 2021, total sales exceeded expectations by increasing 13% to €13.6 billion ($14.3 billion U.S.), said the association. Germany is the largest user of robots in Europe, according to the International Federation of Robotics (IFR).

“The robotics and automation industry is booming,” stated Frank Konrad, chairman of VDMA Robotics + Automation (VDMA R+A). “However, suppliers will not be able to process the orders that are on the books as quickly as usual. The challenge now is to manage bottlenecks in the supply chains.”

The VDMA noted that three subsectors performed differently in the past year. In 2021, industrial robot sales in Germany increased by 13% to €3.5 billion ($3.6 billion), it said.

VDMA R+A said it expects sales of robotics and automation in Germany to increase by 6% in 2022. However, it reduced that projection because of supply chain disruptions. “In particular, a shortage of electrical and electronics components is extending delivery times,” it said. 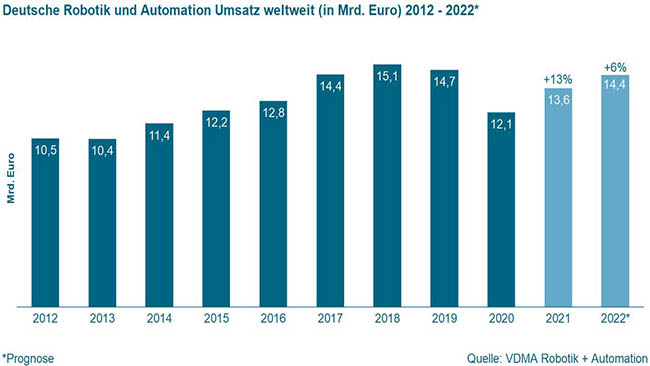 As in much of the industrialized world, the retirement of the Baby Boomer generation is exacerbating labor and skills shortages in Germany, observed the VDMA. It said the solution will require a combination of technology and government policy.

“The labor shortage cannot be solved by robotics and automation alone,” said Konrad. “Companies are doing their best to address the shortage of young talent.”

“However, we need a stronger commitment from politicians,” he added. “After supply chain disruptions, the lack of personnel threatens to become the next major bottleneck for German industry.”

Eighty percent of decision makers at German manufacturers said that new technologies such as assistive systems and human-robot collaboration could benefit human workers, said the VDMA. It said it expects a new generation of automation that can be used without any programming expertise, as well as new opportunities for education and training. The association added that 52% of those polled said that employees with technical qualifications will get better-paying jobs in the future.

A survey by Messe München, the organizer of Automatica, found that 88% of industrial decision makers who responded said that more sustainable production is a goal. New technologies can ensure quality, faciltiate the “circular economy,” and develop renewable energy, said the report.

For example, more precise robots can make photovoltaic modules inexpensively, as well as help meet the demand for batteries for electric vehicles, it said.

Messe Munchen
Automatica returns to Munich this week after disruptions from the COVID-19 pandemic.