A new report by Oxford Economics claims that robots are forecasted to replace almost a tenth of the world's manufacturing jobs with the majority borne by lower-income areas in developed nations. 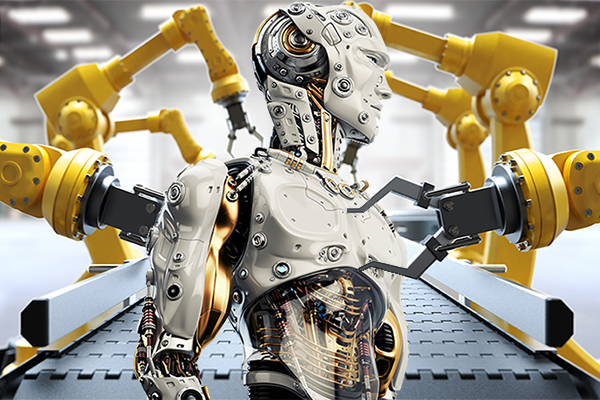 Oxford Economics, global forecasting, and quantitative analysis firm have released a new report that predicts robotic machines will displace about 20 million manufacturing jobs across the world over the next decade.

Robots are increasingly capable of performing tasks that were previously relied on human hands.

Already, the number of robots in use worldwide multiplied three-fold over the past two decades, to 2.25 million.

Trends suggest the global stock of robots will multiply even faster in the next 20 years, reaching as many as 20 million by 2030, with 14 million in China alone.

This increase will be challenging for governments and policy-makers as it will impact the economy, the workplace, and society.

As a result of robotization, tens of millions of jobs will be lost, especially in poorer local economies that rely on lower-skilled workers.

This will, therefore, translate to an increase in income inequality. However, the rise of robots will also be beneficial in terms of productivity and economic growth, leading to the creation of new jobs.

How Robots Change the World

The AI Paradox - How Robots Are Making Work More Human

Over the next decade, a great wave of technological change will wash through the economy, transforming the nature of work and the shape of the labor market.

Oxford Economics collaborated with Cisco to study the implications of these trends on jobs over the next decade. The results are based on a brand-new, multi-layered modeling framework, that enables Cisco to simulate the real-world dynamics of technological change and its interaction with the world of work.

They found that 6.5 million US workers will have to seek out a new profession over the next decade. Workers in transport, lower-level manufacturing, and agriculture jobs will face a difficult time. Meanwhile, they see new jobs emerging in other areas, such as computing, management, and media, as well as in healthcare and sales.

The Oxford Economics Skills Matching Model is used to help simulate the job-moves workers will make in response to a shift in the nature of work. What emerges are signs the US is facing a significant reskilling challenge. There is an acute ICT skills shortfall to overcome and, paradoxically, as technology becomes more capable it is “human skills” that explain much of the gap between today's workforce and the needs of the future.

Download the Report: The AI Paradox - How Robots Are Making Work More Human

The Robot Vulnerability Index shows those specific regions that are at the highest risk of labor disruption - but also reveals some common patterns across regions. 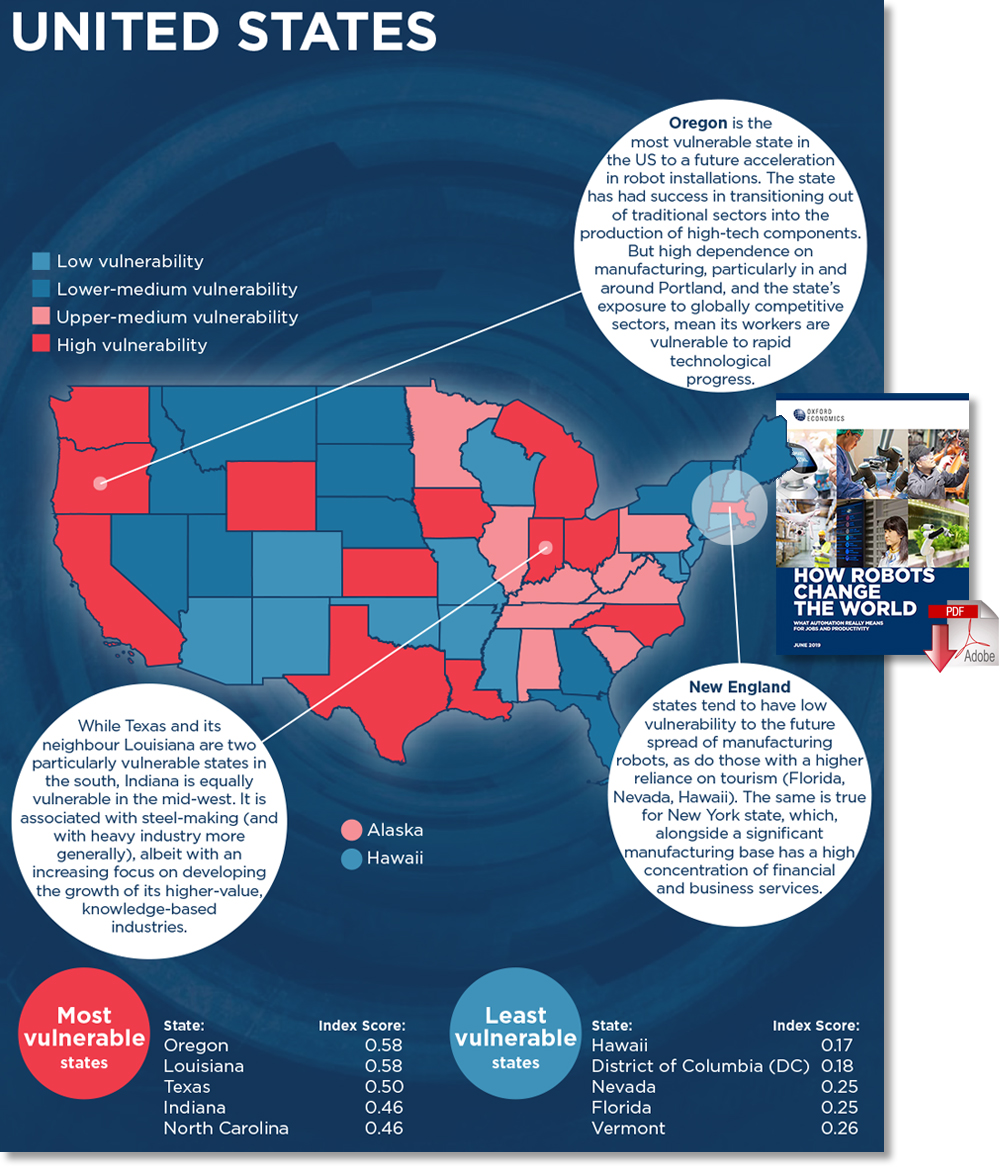 This index helps identify which regions within the chosen economies (the US, Germany, UK, France, Japan, South Korea, and Australia) will be hardest hit by the ongoing automation of the manufacturing sector.

Since 2010, the global stock of robots in the industry has more than doubled: as many robots were installed in the past four years as over the eight previous.

China presents a big opportunity for growth in automation.

China already accounts for a fifth of the world’s industrial robots, with every third new one being installed there. Beijing “is investing in robots to position itself as the global manufacturing leader,” Oxford Economics said.

By 2030, some 14 million robots could be working in China, “dwarfing” the rest of the world, according to Oxford. 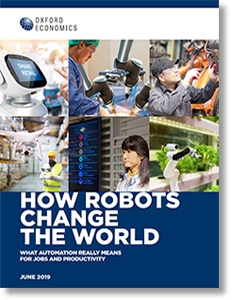 How Robots Change the World
Oxford Economics brought together a team of their economists, econometricians, modelers and technology experts from across their worldwide network of over 250 analysts to conduct an extensive research study to analyze the robotics phenomenon, and what automation really means for jobs and productivity. Download Now!

The AI Paradox and How Robots Are Making Work More Human
This research study goes beyond existing efforts to identify the jobs at risk of automation and where new jobs will be created, it attempts to answer vital questions such as; which jobs will be automated and what will those employees do? Download Now! 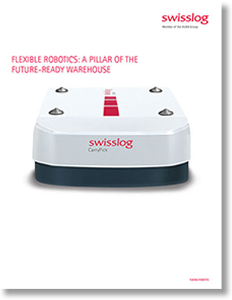 Flexible Robotics: A Pillar of The Future-Ready Warehouse
With the continued march of e-commerce and omnichannel fulfillment, warehouse operators must get efficient at order picking at the “each” level, simply throwing more human labor at the challenge becomes expensive and hard to sustain. Download Now!