Experts from around the world share advances in robots and AI for assistance, rehabilitation, voice interaction, and industrial uses. 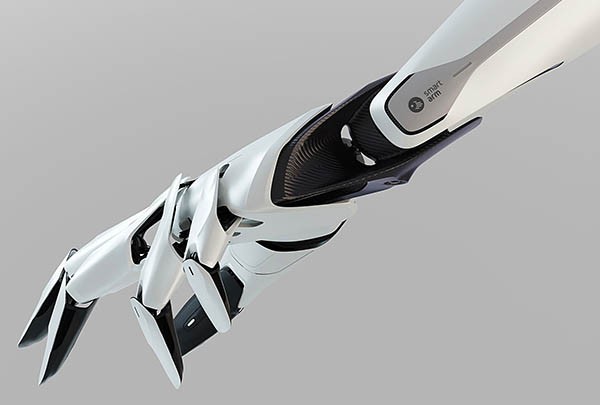 From prosthetics to voice controls and artificial intelligence, advances in multiple technologies are helping robots and assistive devices to work more closely with humans. Speakers during a virtual event on “The Evolution of Human-Robot Interaction” produced by the Global Robot Cluster last night explained how these systems can augment human capabilities and improve both industrial productivity and the quality of life.

In his opening remarks, Changho Kim, chairman of the Global Robot Cluster, noted that progress is being made worldwide in human-machine interfaces. The event involved experts from South Korea and Europe, as well as U.S. robotics clusters MassRobotics and Silicon Valley Robotics, which co-hosted.

One of the top goals for researchers and companies developing wearable technologies is to democratize access to systems that can help people with disabilities.

Only 5% to 15% of amputees have access to advanced prostheses, said Hamayal Choudhry, founder and CEO of smartARM. His company is working on a low-cost bionic arm and hand that uses 3D printing and machine learning. It includes a camera embedded in the wrist to calcluate grasp, as well as pre-loaded grasps.

“We want this to be affordable, intelligent, and personalized,” he said. A companion app for training custom grips will be available as a service from Toronto-based smartARM.

Seismic's elastic system weighs a total of 7 lb. and is now availble for preorder. However, it is intended for commercial uses rather than therapeutic ones and includes behavior apps for construction and logistics. Healthcare reimbursements can be a challenge, particularly in the U.S., Palfreyman acknowledged.

“We're still exploring how this will be charged out,” he said. “It's not an FDA-approved device; it's ultimately a consumer product. We're willing to license it out to healthcare applications.”

In addition to machine vision, a sense of touch is essential for human-level manipulation. RasLabs originally developed its electroactive polymer with the intention of using it for actuation, said Peter Vicars, CEO of the MassRobotics resident in Boston.

“It can change shape with low voltage—12 to 15 volts—by 35%, and there's also an enormous attenuation of force,” he said. “With the smart material, we can make a sensor fit on the end of a traditional robotics gripper, providing a sense of touch similar to our own fingertips.”

RasLabs' sensors could fit inside a robotic gripper or prosthetic hand, and it is working on a soft gripper, said Vicars. “It has a sensitivity of 0.05 newtons—the touch of a feather,” he explained. The company is looking at working with existing robotic grippers, Vicars told Robotics 24/7.

Developers get tools for usability

Another goal for human-robot interaction that is becoming attainable is the ability for non-Ph.D.s to tell robots what to do.

“We won't need to program robots in the future,” said Matthias Scheutz, CEO of Thinking Robots Inc. in Boston. “Next-generation human-robot interaction will be task-based, multimodal, natural language instruction.” He shared a video demonstration of a robot responding to human directions without prior knowledge.

“We want to get from the DOS of robotics to Windows,” said Ross Mead, co-founder and CEO of Semio. “We call arora, our software platform for natural language-based applications, 'Android for androids.'”

The Los Angeles-based startup is developing tools for managing and deploying apps for social robots. “There are three categories of functionality—user interfaces, the app ecosystem, and developer tools,” Mead said.

Semio is designing for conversational interactions and includes some controls for making robots move. At the same time, major entertainment companies are interested in defining specific movements for branded characters, he said.

In other AI techniques, trying to train for all possible variations leads to infinite branching. “The system needs to correct wrong inferences,” Gorchet said.

“We've replaced deduction with induction and added the ability to add knowledge on the fly,” he added. “Systems need less training and less images.”

“What about computation at the edge?” asked Tom Ryden, executive director of MassRobotics and moderator of the panel discussion.

“Yes, we can do it [AI processing] on the factory floor,” replied Gorchet. Boston-based Neurala this month launched a European subsidiary, and this week, it raised $12 million to scale its VIA AI for industrial inspection.

“There are more startups and more experimentation than ever before,” observed Ryden. Progress in robotics and AI to benefit humanity will continue along multiple paths worldwide, agreed attendees.

Diligent Robotics Raises Over $30M in Series B to Deploy Mobile Manipulator in Hospitals
Since its debut in 2018, Diligent Robotics' Moxi has been deployed in more and more healthcare facilities.