International Federation of Robotics finds that government strategies for robotics R&D continue to diverge, with no clear winners yet. 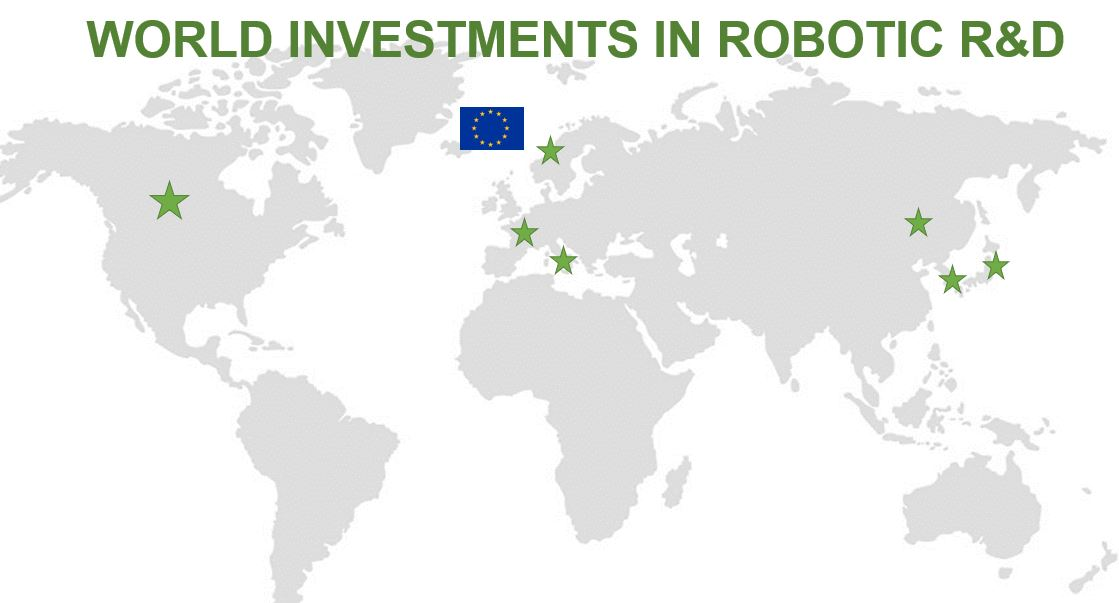 International Federation of Robotics
The IFR has updated its report on global robotics R&D, focusing on leading countries and regions.
By Eugene Demaitre
·

The International Federation of Robotics today announced the 2021 update for its “World Robotics R&D Programs,” in which it examines government funding of robotics research and development across the world. Each of the top five nations has adjusted its strategy as their economies begin to recover from the COVID-19 pandemic. However, their strategies also reflect different priorities, as countries seek to lead different aspects of innovation or commercialization.

“The first version of 'World Robotics R&D Programs' was introduced in June last year,” stated Prof. Dr. Jong-Oh Park, vice chairman of the IFR Research Committee and a member of its executive board. “Since then, dozens of countries have updated their robotics R&D programs. The five most advanced robotics countries, South Korea, Japan, Germany, [the] USA, and China follow up a very different strategic focus.” 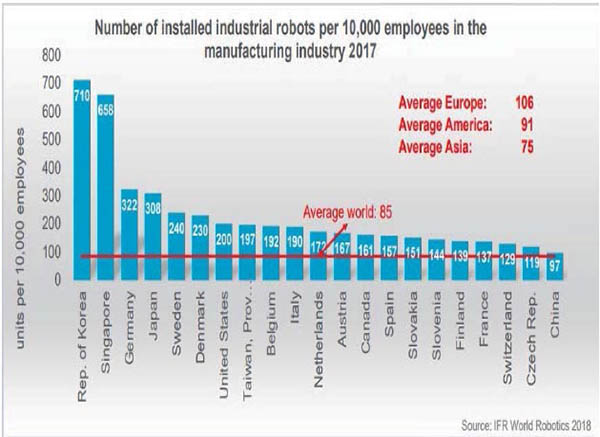 The “Made in China 2025” plan has promoted since 2015 robotics innovation and usage across industries, particularly in manufacturing and service applications, said the IFR. Beijing has made no secret of its desire to grow from the world's leading manufacturer and user of robots to the world's leading producer.

“China wants to cultivate at least three leading enterprises with international competitiveness and create more than five clusters of robot-supporting industries,” the IFR said. It noted that China has reached a robot density of 187 units per 10,000 workers in the manufacturing industry, ranking 15th worldwide, so it has a ways to go in adopting automation.

Japan's “New Robot Strategy” is aimed at making it the world's No. 1 robot innovation hub, found the IFR. The country is already the world's leading maker of robots, supplying 47% of systems in 2019.

Japan's strategy has set a target of increasing robotization in manufacturing by 25% for large enterprises and 10% for small and midsize enterprises (SMEs). Japan's government has noted the importance of systems integrators and industry-university partnerships in helping grow robotics adoption.

According to the IFR, Japan's strategy also focuses on agriculture, infrastructure, and healthcare sectors. With an aging population, its no surprise that nursing and medical applications have a budget of $997.3 million (U.S.), as Japanese researchers work on artificial intelligence and robotics to assist people.

In South Korea, the Intelligent Robot Development and Supply Promotion Act has defined robotics as a core industry for the “fourth industrial revolution” or Industry 4.0, said the IFR. The IFR's “World Robotics” statistical yearbook found that the Republic of Korea has doubled its number of industrial robots in operation to 319,000 in 2019, a 13% increase or doubling over five years, making it the third-largest user after Japan and China.

The country has programs to encourage SME manufacturers to be competive and promote service robots for logistics and healthcare. It also supports development of robotics components and software. For the trans-governmental Full Cycle Medical Device Development project, the Korean government has budgeted 1.2 trillion KRW ($1.07 billion U.S.) from 2020 to 2025.

After the Horizon 2020 program, the European Commission has launched the Horizon Europe framework program to support innovation from 2021 to 2027, said the IFR. One of the top priorities of the new plan is encouraging researchers and citizens to develop awareness and systems for an environmentally sustainable and healthy future.

“Cluster 4” of the Horizon Europe plan covers “Digital, Industry, and Space” technologies, including robotics. It will provide funding of 198.7 million EUR ($240 million) for the digital transformation of manufacturing and construction, autonomous systems to support workers, enhanced cognition, and human-robot collaboration, said the IFR.

Within Europe, Germany's “High-Tech Strategy 2025” is the fourth edition of the its R&D program, which promotes partnerships among business, academia, and research institutions. It has set a target annual investment of 3.5% of gross domestic product (GDP) in R&D by 2025, with Germany's GDP at $3.85 trillion in 2019.

As part of the “Shape Technology for the People” mission, Germany launched the “Together Through Innovation” program last year. Under it, the Federal Ministry of Education and Research (BMBF) will provide about 70 million EUR ($84 million) per year until 2026, reported the IFR.

Although the U.S. doesn't have as unified or comprehensive a robotics strategy as other nations, there are several initiatives that have continued regardless of politics or administration. The IFR cited the example of the National Robotics Initiative (NRI), which the federal government launched to promote fundamental robotics R&D. NRI-3.0 encourages collaboration among academia, industry, nonprofits, and other organizations to strengthen connections between science, engineering, deployment, and robotics use.

Other organizations include the Advanced Robotics for Manufacturing (ARM) Institute, which is funded by the U.S. Department of Defense (DoD) and seeks to improve U.S. manufacturing competitiveness through workforce development and robotics adoption. A consortium of universities last year released an updated version of the “U.S. Robotics Roadmap,” a document offering guidance to policymakers.

The largest U.S. investor in unmanned systems remains the DoD, with a $7.3 billion budget projected in 2020 and 2021, said the IFR. According to “World Robotics,” robot density in American manufacturing had experienced a 7% compound annual growth rate (CAGR) between 2014 and 2019, reaching 228 robots per 10,000 employees. It ranked the U.S. ninth worldwide and third in terms of annual installations of industrial robots. 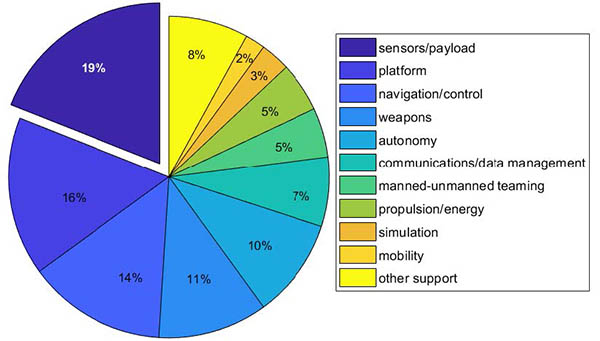 Technology areas funded by the U.S. Department of Defense for 2020. Source: International Federation of Robotics

Similarly, the Association for Advancing Automation (A3) recently reported that robot orders in the first quarter of 2021 increased 19.6% from the same period last year, marking the second-strongest Q1 since 2017, before trade conflict with China, automotive slowdowns, and the novel coronavirus pandemic. A3's statistics suggest that the U.S. economy and robotics in particular will rebound this year.

The IFR noted that a unique strength of the U.S. is its investment in space robotics. The National Aeronautics and Space Administration's Artemis program intends to return astronauts to Earth's moon by 2024 and to prepare for missions to Mars beyond that. The program has a budget of $35 billion between 2020 and 2024.

Artemis is a joint effort by NASA, U.S. commercial aerospace providers, and international partners. These include including the European Space Agency (which itself has 22 member countries), Canada, Japan, and Russia, said the IFR.

There are plenty of other bright spots in the global robotics constellation, including AI research in France, customer-service robots in Singapore, drones and assistive systems in Israel, marine systems in the Netherlands, and collaborative robot arms and mobile robots from Denmark. And that's not even counting the billions of dollars currently flowing into autonomous vehicle development, with China and the U.S. as early leaders.

As each country and region seeks robotics leadership, common themes include technological innovation, manufacturing competitiveness, and the ability to coordinate R&D across academia and industry. While some governments are focused more on healthcare or military applications, the robotics advancements they fund could benefit the entire world.

International Federation of Robotics
The IFR has updated its report on global robotics R&D, focusing on leading countries and regions.

Innovation at the Intersection of Agriculture and Robotics
Along with taking on laborious tasks such as picking fruit and controlling weeds, agricultural robots are on their way to...

Clearpath Robotics and Open Robotics Launch TurtleBot 4 With ROS 2 Support
Clearpath says TurtleBot 4 supports ROS 2 out of the box for easier adoption and use by educators, researchers, and robotics developers.

Pittsburgh Robotics Network Welcomes Plus One Robotics to Its Growing Community
Plus One Robotics, which is developing autonomy software for warehouse robots, is expanding from San Antonio, Texas, to a cluster...
More Research & Development