The demand for industrial robots has never been higher, according to the International Federation of Robotics.

The International Federation of Robotics’ World Robotics Report found that an all-time high of 517,385 new industrial robots were installed in 2021 in factories around the world.

This represents a growth rate of 31% year-over-year and exceeds the pre-pandemic record of robot installations in 2018 by 22%. Today, the stock of operational robots around the globe hits a new record of about 3.5 million units.

“The use of robotics and automation is growing at a breathtaking speed,” said Marina Bill, president of the International Federation of Robotics (IFR). “Within six years, annual robot installations more than doubled. According to our latest statistics, installations grew strongly in 2021 in all major customer industries, although supply chain disruptions as well as different local or regional headwinds hampered production.”

Asia continues to lead in roboticization

Asia remains the world’s largest market for industrial robots, reported the IFR. Seventy-four percent of all newly deployed robots in 2021 were installed in Asia, in comparison with 70% in 2020.

Installations for China, the largest adopter in the region, grew strongly by 51%, with 268,195 units shipped. Every other robot installed globally in 2021 was deployed here.

The operational stock broke the 1 million-unit mark, increasing by 27%, the IFR reported. This high growth rate indicates the rapid speed of robotization in China, it said.

After two years of declining robot installations in all major industries, numbers began growing again in 2021. Japan is the world's predominant robot manufacturing country, said the IFR. Exports of Japanese industrial robots achieved a new peak level at 186,102 units in 2021.

The Republic of Korea was the fourth largest robot market in terms of annual installations, following the U.S., Japan, and China. Robot installations increased by 2% to 31,083 units in 2021. This followed four years of declining installation figures. The operational stock of robots was computed at 366,227 units, growing 7%. 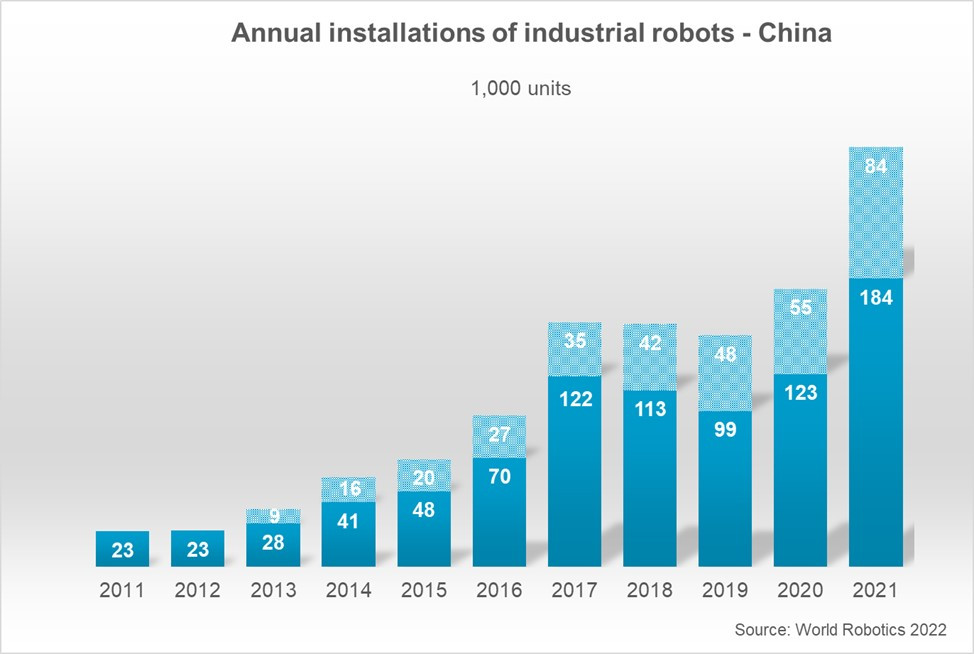 Robot installations in Europe were up 24% to 84,302 units in 2021. This represents a new peak, noted the International Federation of Robotics. Demand from the automotive industry was steady, while demand from the general industry was up by 51%, it said.

Germany, which belongs to the five major robot markets in the world, had a share of 28% of total installations in Europe. Italy followed, with 17%, and France, with 7%.

The number of installed robots in Germany grew by 6% to 23,777 units in 2021. This is the second highest installation count ever recorded, following the peak of 26,723 units caused by massive investments from the automotive industry in 2018.

The IFR calculated the operational stock of robots in Germany at 245,908 units, growing 7% in 2021. Exports of industrial robots from Germany were up 41% to 22,870 units, exceeding the pre-pandemic level.

Italy is the second largest robot market in Europe after Germany. The main growth driver between 2016 and 2021 was the general industry with an annual average growth rate of 8%.

In 2021, 50,712 industrial robots were installed in the Americas, 31% more than in 2020. This marked a strong recovery from the pandemic dip in 2020 and the second time that robot installations in the Americas exceeded the 50,000-unit mark. The benchmark was set in 2018, with 55,212 units, said the International Federation of Robotics.

The automotive industry is still by far the No. 1 adopter, with 9,782 units installed in 2021. However, that demand had been continuously declining from 2016 to 2021, said the IFR.

In 2021, installations were down 7% in comparison with 2020. Installations in the metal and machinery industry surged by 66% to 3,814 units in 2021, putting this industry in second place in terms of robot demand.

The plastic and chemical products industry had 3,466 newly installed robots, an increase 30% in 2021.

The food and beverage industry installed 25% more robots, reaching a new peak level of 3,402 units in 2021. The robotics industry offers hygienic options that experienced growing demand during the COVID-19 pandemic, said the IFR. 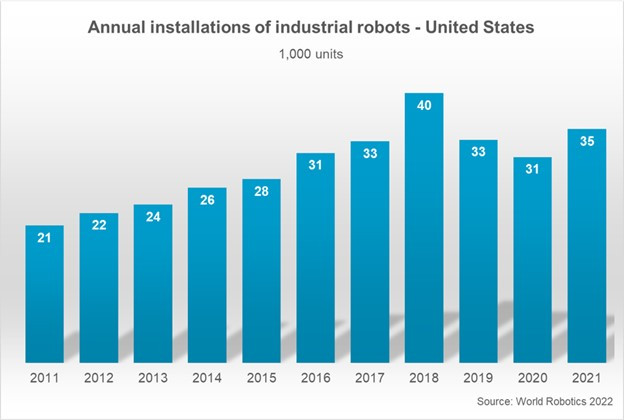 Rising energy prices, intermediate product prices, and scarcity of electronic components are challenging all branches of the global economy, acknowledged the International Federation of Robotics. But order books are full, and demand for industrial robots has never been higher, it said.

North American Robot Sales on Track for Another Record Year in 2022, Says A3
The Association for Advancing Automation reported over 35,000 robot orders between January and September, more than in the same period of 2021.
More Manufacturing