Autonomy is becoming a standard feature in some agricultural tractors. Cognitive Pilot announced that Kirovets K-7M tractors made by Peterburgsky Traktorny Zavod JSC will come equipped with the Cognitive Agro Pilot autonomous driving system starting next year. Production of fully self-driving tractors will begin in 2024, said the companies.

Cognitive Pilot and Peterburgsky Traktorny Zavod (PTZ) said their joint offering will enable farmers to achieve new levels of quality and efficiency. They added that this is Russia’s first production-line OEM contract for autonomous tractors.

“By combining the efforts of two market leaders in agricultural machinery and artificial intelligence, we will be able to create a truly unique and breakthrough product that is widely in demand, not only in Russia, but in foreign markets as well,” said Olga Uskova, CEO of Cognitive Pilot. “It’s important that the schedule for our project calls for fully self-driving tractors to appear on the market by early 2024, which will obviously precede the appearance of industrial self-driving cars.”

Cognitive Agro Pilot already in use

Cognitive Agro Pilot is an self-driving system for farming equipment such as grain combine harvesters, tractors, and sprayers. It includes an autonomous unit to manage farm equipment, a video camera, a display, a set of connecting cables, and other control system elements. The user interface is available via an Android mobile app for smartphones or rugged tablets.

The system analyzes images from just one video camera, said Cognitive Pilot. By using a deep learning convolutional neural network fine-tuned for agronomic purposes, it can understand the types and positions of objects facing the machinery, build movement trajectories, and send commands to perform maneuvers.

The system can shorten harvesting times and increase operator productivity by an average of 25% and reduce direct crop lossses by 8% to 13%, said the company. In 2021, the number of system installations has already exceeded 700 units.

Adding positioning to vision for steering

The signed agreement between PTZ and Cognitive Pilot sets out three main phases of the project and the production of three versions of Cognitive Agro Pilot.

The first version of the control system is currently installed on PTZ machinery. The robotic tractor is capable of following a trajectory in autonomous mode, automatically controlling the optimum speed, gear settings, slippage, and engine load. The system can before obstacles and operate in low-visibility conditions.

Cognitive Agro Pilot will include a GNSS high-precision positioning system for steering. This is needed for operations in areas where no visual guidance points are available and farm fields are demarcated, said the company.

It also enables automatic interpretation of satellite images, plotting of harvesting patterns, and driving directions, all of which can be corrected by the computer vision system, according to Cognitive Pilot.

Cognitive Agro Pilot can transmit progress reports to the messenger apps of tractor owners, as well as telematic data about the state of the machine and progress of work with confirmed photographic and video data.

Testing of autonomous tractors with the first version of Cognitive Agro Pilot is expected to be completed by the end of October 2021. PTZ and Cognitive Pilot said they expect to start serial equipment of Kirovets K-7M tractors with the autopilot system in February 2022.

As with Cognitive Agro pilot for harvesters, the system will cost about $10,000 for autonomous tractors, said Anton Emelyanov, chief technology officer of Cognitive Pilot. “[This] is a worthwhile investment in terms of profitability and efficiency,” he told Robotics 24/7. 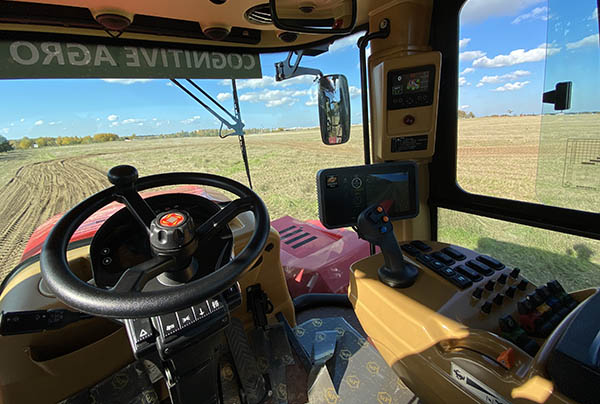 In the second phase of the project, Cognitive Pilot said it will expand its system's functionality with automatic turns and calculation of the best routes for work. It will also be able to refine the course through visual landmarks such as the edges of cultivated soil or vehicle tracks, as well as provide automatic control of trailed implements like plows, mowers, harrows, and sprayers.

In addition, Cognitive Agro Pilot will include automated video analysis and control functions for rock mapping and assessing vegegation and damage to plants from diseases or pests. Finally, the tractor will be equipped with side-view sensors to monitor lateral areas on the move.

Cognitive Agro Pilot will also be able to autonomously operate and monitor an expanded set of farm implements in the third phase, said the company.

The autonomous tractors will also include a remote troubleshooting capability, said Emelyanov.

“This is possible due to the developed system of self-diagnostics of the system, as well as because of the 'connected' architecture, which allows the exchange of data and commands remotely, including when in the field,” he said. “Our communication and navigation unit contains a GSM module with a special antenna amplifying the signal, which allows to access data transmission even in those places where an ordinary mobile phone loses it.” 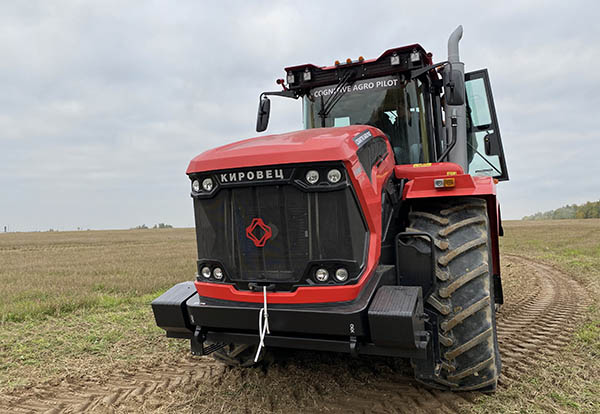 The global market for autonomous tractors will grow from 12,508 units in 2019 to 60,901 units by 2025 at a compound annual growth rate (CAGR) of 24.89%, predicted Markets and Markets. The analyst firm said it expects improved efficiency and crop yields offered by these tractors, as well as government initiatives, to drive adoption.

“With a huge arsenal of breakthrough solutions based on artificial intelligence, Russia has all the chances to become a trendsetter in the global agritech market,” said Sergey Serebryakov, CEO of Peterburgsky Traktorny Zavod. “Our joint solution with Cognitive Pilot will allow local and foreign farms to significantly increase their efficiency, save resources, and move to a fundamentally new level of farm management.”

Serebryakov noted that companies will need to work with the government to encourage development, standards, and investment.

“Together with the Ministry of Agriculture of the Russian Federation, we expect to promptly develop and adopt a set of needed measures to support farmers who purchase such innovative solutions that will ensure the proper pace of our project development,” he said. “[It] will also have a significant impact on the dynamics of the entire domestic agricultural industry.”

Founded in 1801, Peterburgsky Traktorny Zavod began building tractors in 1924. Since then, it has produced over 600,000 tractors of various capacities at its existing plant. PTZ's 200,000 sq. m (2.1 sq. ft.) factory is currently producing about 3,000 tractors with capacity of 240 to 420 horsepower per year. Almost 70% of tractor elements are produced in the plant's shops.

The autonomous Kirovets tractors will be available through dealers in the U.S., Canada, Australia, Europe, Africa, and Central Asia, as well as directly from Cognitive Pilot.