Myomo said it has teamed up with Beijing Ryzur Medical to reach millions of more customers with its wearable rehabilitation devices. 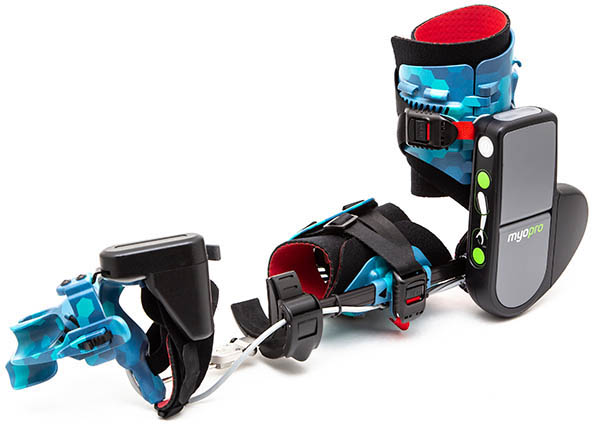 Myomo
The MyoPro2+ orthotic for upper-limb rehabilitation.
By Cesareo Contreras
·

Myomo Inc. is one step closer to manufacturing and selling its robotic rehabilitation devices in China.

Earlier this month, the Boston-based company announced that it had received a portion of the technology license fee payment from the joint venture it is establishing with Beijing-based medical device company Beijing Ryzur Exiom Medical Investment Co.

Myomo received $1 million of the $2.7 million required. It expects to receive the remainder during the second quarter.

“At that point, we will begin transfer of the technology and record the remaining $1.7 million as revenue,” stated David Henry, Myomo’s chief financial officer, in a press release.

“In anticipation of this final payment, plans are under way to assist joint-venture staff in establishing operations for the production and sale of the MyoPro’s for individuals in China with upper-limb paralysis,” he added.

The name of the joint company is Jiangxi Myomo Medical Assistive Appliance Co. Myomo and Beijing Ryzur first announced the partnership last year, saying the goal of the relationship was to help Myomo manufacture and sell its products in Hong Kong, Macau, and Taiwan.

Myomo CEO Paul Gudonis told Robotics 24/7 the company has already set up operations throughout North America and Europe. But to expand into Asian markets, a joint venture was the best option, he said.

Founded in 2004, Myomo makes the MyoPro a powered arm and hand brace that was originally developed at the Massachusetts Institute of Technology with Harvard Medical School.

The device “works by reading the faint nerve signals (myoelectric signals) from the surface of the skin (fully non-invasive, with no implants) then activating small motors to move the limb as the user intends (no electrical stimulation),” according to the company’s website.

“We’re a smaller company,” said Gudonis. “We really wanted a local partner that could bring manufacturing and distribution expertise plus capital to set up operations.”

He added, “They bring knowledge of the equivalent of the FDA regulatory process, and they already have existing staff and distribution systems for rehab hospitals and consumers.”

Large population in China could benefit

Myomo estimates about 14 million people in China have a form of chronic arm paralysis. The company said its wearable products could benefit people who have had strokes, spinal cord injuries, cerebral palsy, and other neurological disorders regain the use of their upper extremities.

The joint venture is majority-owned by Ryuzr Medical, and Myomo shareholders own 19.9%.

The new company will manufacture Myomo’s products under the technology license agreement.

In January, Myomo introduced the latest version of its product, the MyoPro 2+, a 3D-printed iteration of the MyoPro2. The company said the new version is lighter, more comfortable to use, and improves grasp functionality.

Gudonis said Myomo also offers a remote measurement system that allows it to design a patient’s MyoPro based on photos and digital scans. Before, the company’s clinical team had to go out in the field and cast each patient's arm.

Other products include the Mobile Arm Rehabilitation Kit (MARK), which Gudonis said is a “universal-size device that is used for user evaluation and training at rehab hospitals.”

The company is also developing a smaller version of the MyoPro for pediatric patients, he said.

Robotics Promises to Help People With Disabilities
From exoskeletons and prosthetics to grippers and motion control, here are some examples of innovations that can change lives for...