Cognitive systems on the edge allow both collaborative robots and new humanoid to understand people and their environments, says NEURA. 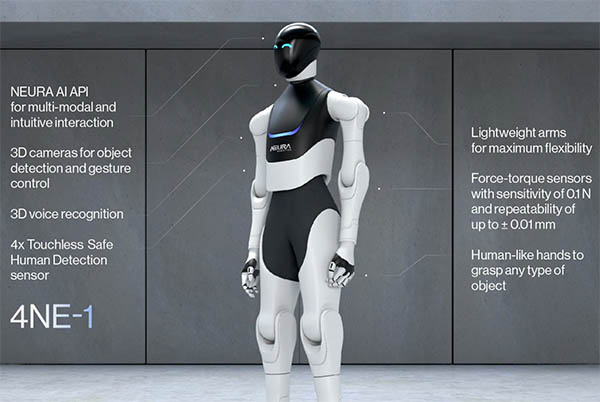 NEURA Robotics GmbH burst onto the collaborative robotics scene three years ago with “cognitive” systems that it claimed were smarter than other robots. Its 4NE-1 humanoid robot—pronounced “for anyone”—is intended to free people from tedious tasks in any industry, said David Reger, founder and CEO of the Metzingen, Germany-based company.

“4NE-1 is more than a research study,” he said in a blog post last month. “4NE-1 is a robust robot based on verified, cognitive NEURA technology, plus an ingrained ability to fit perfectly into humanity’s everyday world.”

The new robot is designed to provide assistance in industries ranging from education and healthcare to emergency response and space exploration, Reger said.

“Most industrial, collaborative, and even surgical robots are still old-school,” he told Robotics 24/7 during a recent tour across the U.S. “You can add a camera to a cobot, but it can't recognize something within five minutes. With our robot, not only is our camera already calibrated, and it can understand where it is and what it's doing.”

Founded in 2019 as Han's Robot Germany, the company set out to design collaborative robots with cognitive capabilities so they could work around people without complex and costly safety systems. The NEURA Robotics brand emerged in 2020.

The company said it integrates sensors and artificial intelligence so that its robots are easy to use and can operate in existing, human-centric environments.

In 2021, NEURA launched MAiRA (Multi-Sensing Intelligent Robotic Assistant), which it claimed was “the world's first cognitive robot” for recognizing and picking objects. The company also produced the the LiWA lightweight arm and raised $86 million.

“We used our own technology in the $4,000 LiWA arm,” Reger explained. “That includes motors, encoders, controllers; even the gearbox, brake, force-torque sensor, for one-tenth the price.”

In July 2022, NEURA showed a wide variety of cobots at Automatica, including MiPA (My Intelligent Personal Assistant), LARA (Lightweight Agile Robotic Assistant), and MAV (Multi-Sensing Autonomous Vehicle) for logistics. It also offered “Jr.” or leaner variants of MAiRA and MAV.

NEURA Robotics' humanoid robot is 170 cm tall (5 ft., 7 in.), weighs about 60 kg (132 lb.), and can carry 20 kg (44 lb.), according to Reger. Its AI is able to recognize different voices and emotions, and its API enables multi-modal human-machine interactions, including commands in multiple languages and gesture control.

“Industrial automation makers weren't interested in voice, but you can talk to our robot, and it understands,” Reger said.

“Our sensors provide full torque feedback in all moving joints, enabling 4NE-1 to detect the ground the robot is walking on and balance accordingly,” he wrote. “Our market-leading force-torque sensors, with a sensitivity of 0.1 N and repeatability of up to ± 0.01 mm, enable 4NE-1 to balance itself as it walks and moves objects to a specific location quickly, smoothly, and—most importantly—safely.”

In addition, the robot's “Touchless Safe Human Detection technology” includes sensors that can detect moving objects or people even if they are obscured by clothing. The AI is designed to avoid collisions and improve over time, enabling 4NE-1 to operate not just in industrial settings, “but in all aspects of life,” said Reger.

More trials and growth ahead

Reger acknowledged that 4NE-1 will need further development and testing before it can come to market, but he expressed confidence in NEURA Robotics' approach. The company is looking at an initial release next year.

“Our robots are the only ones with AI in the robot, on the edge and not in the cloud,” he said. “Nobody else does both hardware and AI, and multi-language, vision, and continuous learning in the cloud doesn't work for everyone.”

NEURA is also willing to work with “so-called competitors,” noted Reger, adding that revenue from licensing its technology doubled in the past year. NEURA has tripled its headcount in one year to about 160 employees, and it recently won a Schwarzer Löwe Business Prize as a leading innovator in the Stuttgart region.

“We've become a big company, and we have to prove ourselves,” said Reger. “We had 1,200 leads from Automatica. We're looking for business partners and customers, and everyone we meet in the U.S. is excited about cognitive robots.”

8 Interesting Cobot Providers From Around the World