“Modern fulfillment centers are evolving into technical marvels — facilities operated by humans and robots working together,” said Jensen Huang, founder and CEO of NVIDIA. He said new processors, software, and simulation capabilities will lead to “the next wave of AI,” including robots able to “sense, plan, and act.”

NVIDIA claimed its invention of the graphics processing unit (GPU) in 1999 “sparked the growth of the PC gaming market and has redefined modern computer graphics, high-performance computing, and artificial intelligence.” The Santa Clara, Calif.-based company added that its innovations are reshaping industries including transportation, healthcare, and manufacturing.

Jetson AGX Orin delivers 275 trillion operations per second (TOPS), more than eight times the processing power of its predecessor, Jetson AGX Xavier. The system has the same palm-sized form factor and pin compatibility as Jetson AGX Xaver and at a similar price.

“As AI transforms manufacturing, healthcare, retail, transportation, smart cities and other essential sectors of the economy, demand for processing continues to surge,” stated Deepu Talla, vice president of embedded and edge computing at NVIDIA leading into GTC. “A million developers and more than 6,000 companies have already turned to Jetson. The availability of Jetson AGX Orin will supercharge the efforts of the entire industry as it builds the next generation of robotics and edge AI products.”

Jetson AGX Orin customers can also use the full NVIDIA CUDA-X accelerated computing stack, JetPack software development kit (SDK), and pretrained models from the NVIDIA NGC catalog. They also gain access to the latest frameworks and tools for application development and optimization such as NVIDIA Isaac on Omniverse, Clara for healthcare, Metropolis, and the TAO Toolkit.

Jahmy Hindman, chief technology officer at John Deere, noted: “With the global population expected to reach nearly 10 billion people by 2050, farmers have a steep challenge of feeding the world, and they can’t do it alone. Our fully autonomous tractor, featuring two NVIDIA Jetson GPUs for quick and accurate image classification at the edge, will be on farms this year, supporting farmers in overcoming challenges and providing for our growing world.”

“We recognize the key role for AI in digitization of surgery through quantitative analytics and real-time clinical decision support systems,” added Dan Stoyanov, chief scientific officer at Medtronic Digital Surgery. “The latest NVIDIA Jetson platform brings us a new level of computational performance in the operating room and enables us to advance intraoperative systems to better support surgeons, through data-enabled solutions.”

The NVIDIA Jetson AGX Orin developer kit is now available for $1,999. Four production modules will be available in the fourth quarter, starting at $399 for the 8GB Orin NX series for 1,000 units, and going up to the 64GB AGX Orin for $1,599.

The global market for autonomous mobile robots (AMRs) in intralogistics could surpass $46 billion by 2030, up from under $8 billion in 2021, estimated ABI Research. Factories and warehouses are turning to AMRs to improve efficiency and safety at scale, wrote Gerard Andrews, senior product marketing manager at NVIDIA, in a blog post.

“Order fulfillment is a massive industry of moving parts,” he said. “Heavily supported by AMRs, warehouses can span 1 million square feet, expanding and reconfiguring to meet demands. It’s an obstacle course of workers and bottlenecks for hospitals, retailers, airports, manufacturers and others.”

Designing a full navigation, safety, and management stack for new AMRs can be costly and time consuming. NVIDIA's new Isaac Nova Orin compute and sensor reference platform can free developers to focus on building and testing applications, according to Andrews. It includes over-the-air software management and can provide 3D perception for high levels of autonomy, he said.

“The entire platform is calibrated and tested to work out of the box and give developers valuable time to innovate on new features and capabilities,” said Andrews. 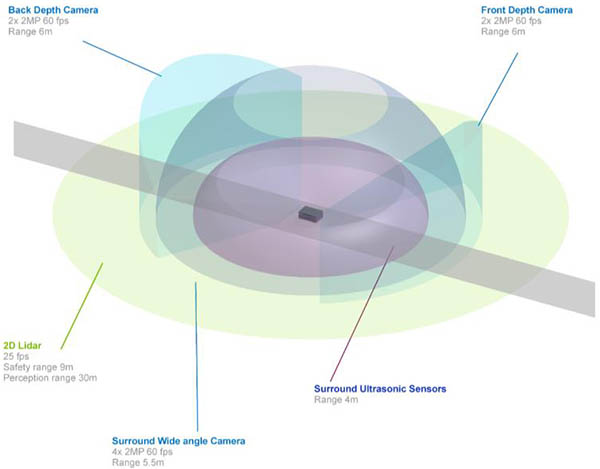 “Omniverse is central to our robotics platforms,” said Huang as he announced updates and new releases for Omniverse. “And like NASA and Amazon, we and our customers in robotics and industrial automation realize the importance of digital twins and Omniverse.”

eYs3D Launches XINK Development Platform for Vision-Equipped Robots at CES 2023
The platform as a service uses a system on module with the new multi-core ARM CPU and 4 TOPS data processor...