The winner of the Las Vegas race successfully passed other autonomous race cars and set a new speed record. 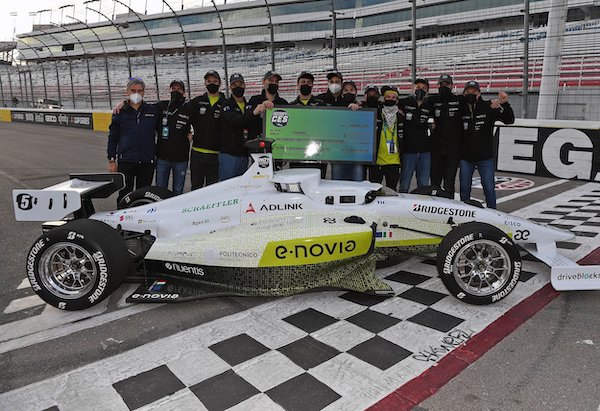 Indy Autonomous Challenge
Team PoliMOVE has members from the Polytechnic Institute of Milan and the University of Alabama.
By Robotics 24/7 Staff
·

Indy Autonomous Challenge competitors reached new speeds and levels of sophistication, with fully autonomous racecars passing one another on the Las Vegas Motor Speedway yesterday. Team PoliMOVE from Politecnico di Milano and the University of Alabama won the $150,000 grand prize in the Autonomous Challenge @ CES.

Indianapolis-based Energy Systems Network (ESN) said it organized the IAC with the goal of solving real-world problems with technology that will speed the deployment of advanced driver-assistance systems (ADAS) and the commercialization of fully autonomous vehicles.

“We came to CES this week, the world’s most influential technology innovation event, to showcase to the world how this competition is catapulting autonomous technologies forward,” said Paul Mitchell, president and CEO of ESN.

“We’re harnessing the power of prize competitions to attract the best and the brightest minds from around the globe to further the state-of-the art technology in safety and performance of automated vehicles, and the teams did just that today with another historic competition,” he added.

The rules of the IAC competition required each team to qualify in a high-speed time trial to determine their seed in the head-to-head passing competition.

The Dallara AV-21 used three Luminar Hydra sensors to provide 360-degree long-range sensing for safe autonomy at high speeds. TII provided its global expertise in automation and robotics as partner in TII EuroRacing, one of the teams competing at the Consumer Electronics Show (CES).

*Did not advance to Friday’s final competition.

Karen Chupka, executive vice president of CES at the Consumer Technology Association, officially started the competition with the call, “Ladies and gentlemen, start your software.”

Halo, a remote-piloted driverless car service operating on T-Mobile’s 5G network served as the official pace car, leading each set of IAC teams off of pit lane and completing a warmup lap at speeds of 65 to 80 mph before the start of each round. Bridgette Foster from Las Vegas sang the national anthem.

PoliMOVE competed against TUM Autonomous Motorsport in the final round of the competition. In addition, PoliMOVE set the fastest speed record on an oval with a top speed of 173 mph.

“Today was the real birth of autonomous racing,” said Prof. Sergio Savaresi, team lead of Politecnico di Milano. “The real high-speed multi-agent racing was pushed to its very limits. The research on autonomous cars will certainly benefit from this historic milestone.”

Indy Autonomous Challenge
Team PoliMOVE has members from the Polytechnic Institute of Milan and the University of Alabama.