The RE2 SAPIEN 6M has six degrees of freedom, a high strength-to-weight ratio, and integrated arm control, says the Pittsburgh company. 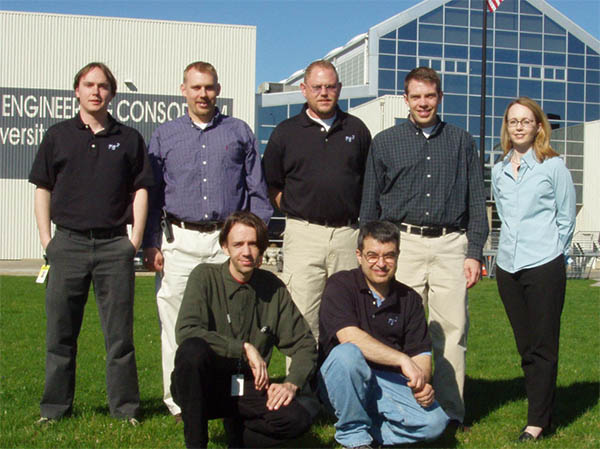 RE2 Robotics Inc., a leading developer of intelligent mobile manipulation systems, today marked its 20th year in business with the launch of its newest robotic arm, the RE2 Sapien 6M.

“We are incredibly proud of the success we have achieved over the past 20 years here in Pittsburgh,” stated Jorgen Pedersen, president and CEO of RE2 Robotics. “From Day 1, we have been focused on creating technology that helps humans to do their jobs safely and efficiently, and we remain dedicated to that mission today. We look forward to more innovation in the years ahead, as we continue to focus on developing intelligent robotic technologies that enhance worker safety and productivity.”

Originally founded on July 20, 2001, as a defense subcontractor to Carnegie Mellon University by alumnus Jorgen Pedersen, the company incubated at the National Robotics Engineering Center (NREC) in Pittsburgh. Today, anchored in Pittsburgh’s Robotics Row, the RE2 campus encompasses two buildings on a city block in the Lawrenceville neighborhood and includes space for indoor, outdoor, and underwater testing of robots. 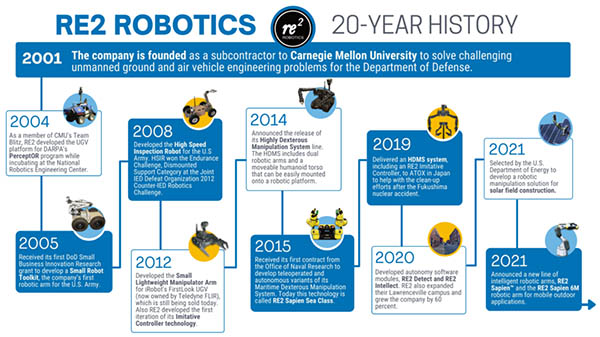 RE2 Robotics said its RE2 Sapien family can operate in a variety of complex indoor and outdoor environments for use in the aviation, construction, defense, energy, and medical industries. The company said its systems consist of robotic arms, intuitive controllers, and advanced autonomy software.

“The 6M model of the RE2 Sapien line of robotic arms includes embedded intelligence, integrated arm control, an unprecedented strength-to-weight ratio, and a sleek hardware design that can withstand extreme temperatures and environmental conditions,” claimed the company. 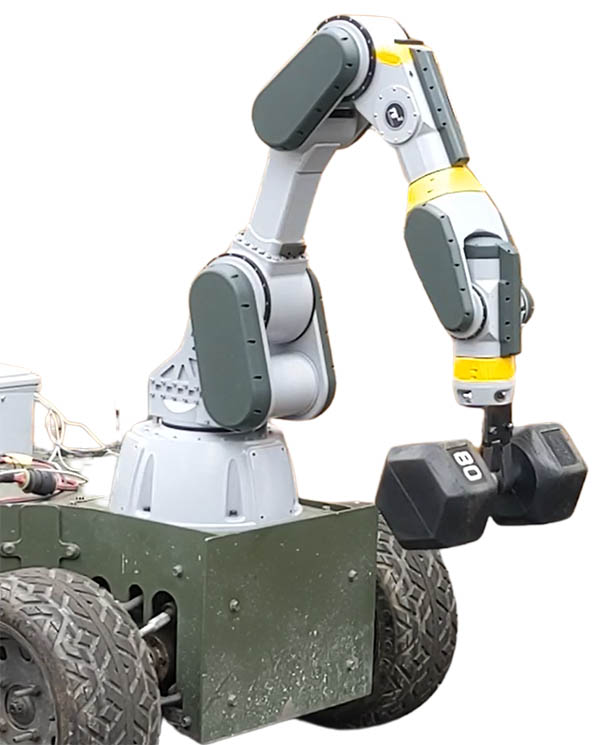 RE2 Sapien 6M demonstrating its strength. Source: RE2 Robotics

The arm has six degrees of freedom, including continuous wrist and elbow roll joints, which enable precise manipulation and placement of objects.

“It is exciting to see how RE2’s technology has evolved from unmanned ground vehicles and teleoperation to the creation of truly intelligent mobile manipulation systems, such as the RE2 Sapien 6M,” said Keith Gunnett, RE2 chief technology officer and one of the company’s original employees. “While there are still applications that require direct teleoperation, our talented engineering teams are developing supervised autonomous systems that are powered by machine learning and artificial intelligence.”

RE2 said the Sapien 6M is compatible with its RE2 Detect autonomous perception system and RE2 Intellect decision processing system, enabling autonomous mobile manipulation in both structured and unstructured environments.

For applications that still require human intellect to perform a complicated task, the RE2 Sapien 6M arm can be teleoperated with the RE2 Imitative Controller, a human-robot control interface that enables remote control capabilities.

“Our goal is to develop human-like robotic arm solutions that improve operational efficiencies, worker safety, and overall productivity for our customers,” said Pedersen. “The RE2 Sapien 6M robotic arm is a leap-ahead technology that will support our customers’ complex applications across multiple markets

RE2 now has more than 85 employees, several of whom have been with the company since its early days as a start-up. “We have come a long way since our days as an engineering services lifestyle company,” added Pedersen. “I look forward to seeing what the next decade brings for the amazing team at RE2 Robotics.”

YouiBot Completes Series B Fundraising to Accelerate Mobile Robot Expansion
YouiBot says latest funding will help it scale to offer its mobile robots for industrial inspection and other applications worldwide.

ARM Institute Issues Project Calls for AR in Manufacturing, Endorsement Auditors
The ARM Institute is looking for project proposals to help the U.S. Air Force and to assess advanced manufacturing...

Everyday Robots Moves Out of Alphabet X, Reports Progress Toward General Purpose Robot
With a combination of different machine learning techniques and simulation, Everyday Robots says it has improved robot performance of everyday...

RE2 Robotics Receives U.S. Navy Funding for CLAMS System to Improve ROV Manipulation
RE2 Robotics says its CLAMS Project will enable coupled control of a remotely operated vehicle and robotic arms through a...
More Mobile Manipulation