RE2 Robotics says the inspection-class ROV it is developing for the Office of Naval Research has descended more than 1 km. 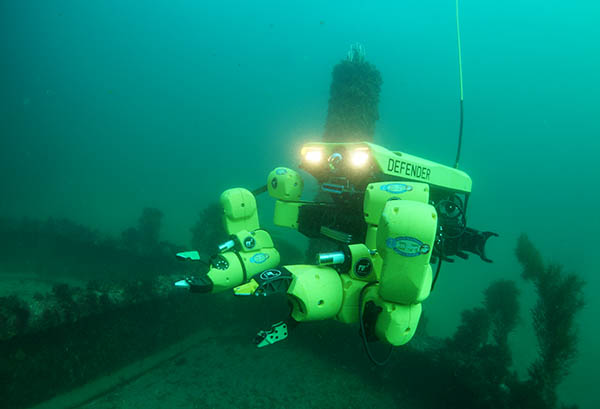 RE2 Robotics
The Maritime Mine Neutralization System has performed at depths of up to 1 km without problems.
By Robotics 24/7 Staff
·

RE2 Robotics Inc. today announced that the Maritime Mine Neutralization System, or M2NS, has reached an “unprecedented” depth of more than 1 km (3.9 mi.) during a recent open-water demonstration for the U.S. Navy’s Office of Naval Research, the project’s sponsor.

“These tests allowed us to demonstrate the continuing success of the M2NS project for the U.S. Navy,” said Jack Reinhart, vice president of project management at RE2 Robotics. “The progress we made during these deep dives shows that we could successfully complete an underwater supervised autonomous mission at depths of more than 1,000 meters without any damage to the system. The M2NS system succeeded where no other system of this class has before.”

RE2 Robotics offers the RE2 Sapien family of robotic arms, RE2 Detect computer vision software, and RE2 Intellect autonomy software. The Pittsburgh-based company said its intelligent mobile manipulation systems can operate in a variety of complex indoor and outdoor environments. RE2 claimed that its systems help companies in the aviation, construction, defense, energy, and medical industries to enable remote operations, improve worker safety and efficiency, and reduce operational costs.

RE2 M2NS takes a deep dive

M2NS is composed of RE2 Sapien Sea Class robot arms mounted onto VideoRay’s Defender inspection-class remotely operated vehicle (ROV). The autonomous underwater system also uses RE2 Detect and RE2 Intellect to enable the precise, autonomous, and clandestine neutralization of a target.

During the test event, which took place in the Pacific Ocean with support from the Naval Information Warfare Center Pacific in Point Loma, Calif., M2NS completed four successful dives exceeding 1,000 meters of depth. The dives were conducted using supervised autonomy, which allows human operators to monitor the marine system’s movements and make corrections if necessary.

All onboard electronics remained operational during the deep dives, including the ROV’s camera feed and data to the support vessel, proving the survivability of the complete system to a depth of more than 1,000 meters.

”We have proven the ability to deploy the Defender with a large payload to depths of 3,500 ft. [more than 1,000 m] from a small deck footprint,” said Marcus Kolb, chief technology officer at VideoRay. “We performed complex, autonomous manipulation tasks with the RE2 system while station-keeping a few feet off the bottom. We are excited about the direction of this program and how it will help accelerate commercial solutions.”

Following the success of the test dives, RE2 Robotics and VideoRay are planning future demonstrations for the Office of Naval Research to test the system’s autonomy capabilities using a tetherless ROV at extended depths.

RE2 Robotics
The Maritime Mine Neutralization System has performed at depths of up to 1 km without problems.

RE2 Marks Technical Achievement With STARFISH Gripper for the U.S. Navy
RE2 Robotics Continues to Grow After Sarcos Acquisition
Sarcos Closes Acquisition of RE2, Establishes Pittsburgh Presence
Sarcos and RE2 CEOs Talk Next Steps After Acquisition Announcement
Sarcos Technology and Robotics Corporation to Acquire RE2 for $100M