Walsh was the mayor of Boston when MassRobotics opened its facility in 2017. 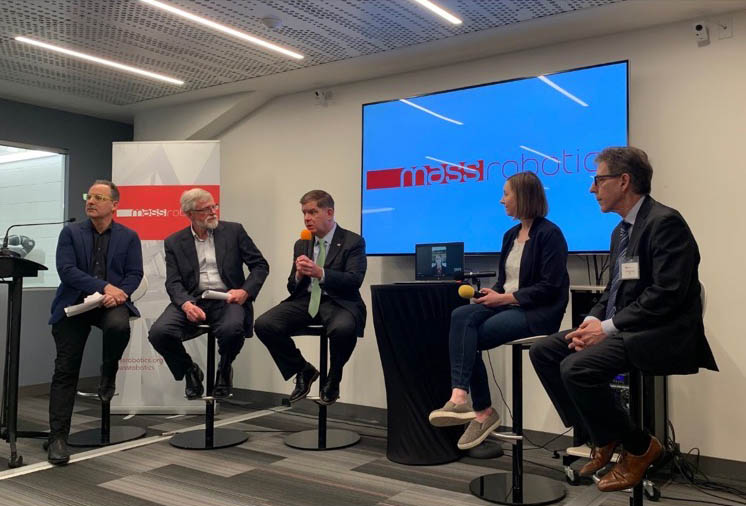 In MassRobotics’ early days, when Executive Director Tom Ryden was going around speaking to industry and government leaders about his plan to build an innovation and networking robotics hub in Boston, one question got brought up constantly.

“The No. 1 question I got was, ‘Why do you support this technology? It takes jobs, right?’” he said.

That was around 2015. Seven years later, the robotics industry has certainly grown. The global market for industrial robots, which is just one of many types of automation, was valued at $43.8 billion in 2021, according to Statista.com.

MassRobotics, an public-private nonprofit dedicated to growing Massachusetts' robotics ecosystem, now has more than 60 members and a full facility in Boston’s Seaport District.

The tension between robots and jobs remains in the popular imagination. There are still people who question whether robots help workers be more productive or are here to replace them.

To mark the release of its “5 Year Impact Report, 2017-2022,” MassRobotics today hosted a panel discussion about the role robots play in job creation, worker retention, and workforce efficiency.

The consensus was that robots are being designed to work alongside humans. But more work needs to be done by educators, robotics manufacturers, and government leaders to not only dispel the narrative that robots are harmful, but also to give workers the training and opportunities to learn about their benefits.

U.S. Secretary of Labor and former Boston Mayor Marty Walsh was the event keynote speaker, and served on a panel made up of robot experts and educators. Other panelists included Ryden and Julie Shah, an associate professor of aeronautics and astronautics at MIT; Ira Moskowitz, CEO of the Advanced Robotics for Manufacturing (ARM) Institute; and Elisabeth Reynolds, special assistant to the president for manufacturing and economic development at the National Economic Council. 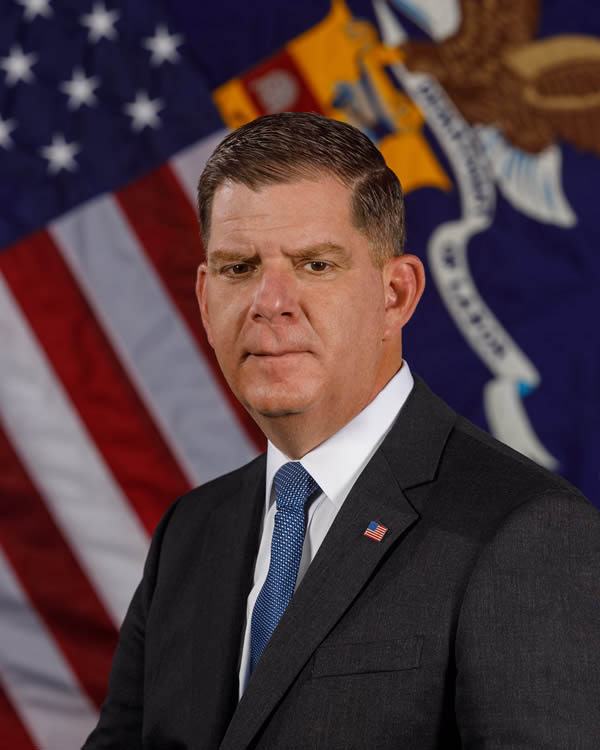 Walsh recalled being approached about MassRobotics wanting to build a facility at 12 Channel St. in Boston back in 2015. He said he thought it was the perfect opportunity to show Boston’s commitment to technology and innovation. In the years since, the robotics space has only become more important.

“It’s really clear to me and society, that technology, robotics, and advanced manufacturing are really important for the future of our city, of our country, and of our economy,” said Walsh.

Walsh said he doesn’t see robots as job killers but rather tools to help accelerate the economy.

In his role as labor secretary, Walsh has traveled across the country visiting numerous factories.

On one visit to a General Electric manufacturing plant in Michigan, he said he met with a woman who had been working at the plant for 15 years. When she started, she had to do a lot of manual labor.

At the end of her shifts, she would be covered in filth. Thanks to the rise of automation and other innovations, she’s still there, but her job has shifted and now she does less manual work, said Walsh.

“She said that the innovation has allowed her the opportunity to still earn a living and raise a family,” he said. “When I think about innovaton technology, I don't think about getting people out of the workforce; I think of opportunities to move us forward.”

Walsh said the U.S. Department of Labor is investing $100 million in the Apprenticeship Building America Grant Program and $45 million in community college grants. He said he is also having conversations with big and small corporations about the role his department has in strengthening the workforce in response to the COVID-19 pandemic and the so-called Great Resignation.

At MIT, Shah is an artificial intelligence researcher and is head of the Interactive Robotics Group. She said the vision behind her lab “is being intentional about developing computing and robotics that enhance rather than replace human capability.” 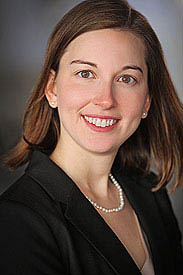 As part of her job, Shah and her team have visited manufacturing plants across Europe and the U.S. to see how they are using robots. When speaking with people running the facilities, Shah said her team has asked if their goal is to have “lights-out factories,” with no human workers, just machines.

Robots are programmed to complete specific tasks designed by an operator, but humans are more dynamic, she said.

“The key thing is these technologies, they don’t take jobs, they do tasks,” noted Shah. “We have the job of figuring out how we task them and reorganize how we work with one another to put the technology in the key lever points to achieve what we want to achieve.”

A conversation with President Biden

Moskowitz said President Joe Biden recently gave a speech at the ARM Institute's headquarters in Pittsburgh about the role that organization is playing in building out the economy by helping train manufacturing workers. Before his speech, Biden spoke with Moskowitz about the narrative that robots are taking jobs from people. 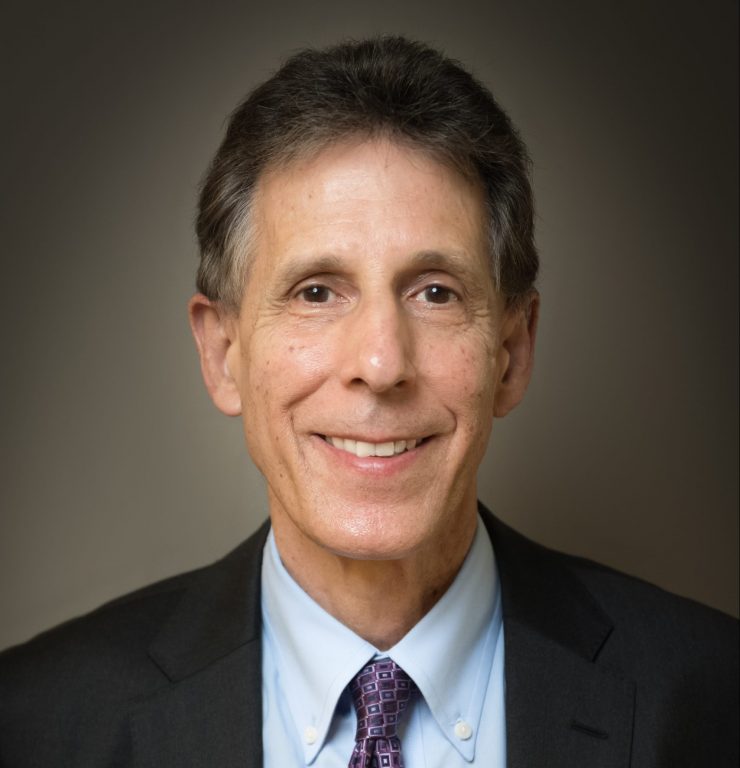 “We all talked about this narrative, and how we are all doing what we can to prove that this is not true,” Moskowitz said. “In my experience of 30 years in advanced manufacturing, and a few years at MassTech, and now the ARM Institute —and this is something we talked to the president about—I’ve personally never seen anybody deploy robotics to replace a human, even before the pandemic, even before the labor shortages.”

He said robots are being designed to do tasks that are difficult or dangerous for humans. And in every instance where there is a robot, a human is overseeing it.

“What we actually said to the president was, [robotics] needs a national focus, and national message as well, if we are going to try and undo that narrative,” said Moskowitz. 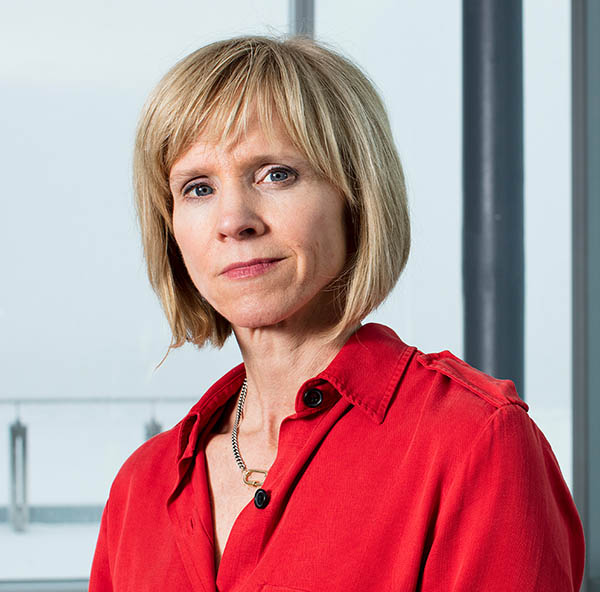 Elisabeth Reynolds, special assistant to the president for manufacturing and economic development at the National Economic Council

“We are going to have to innovate our way into resilient supply chains, whether that’s semiconductors or PPE [personal protective equipment], robotics are going to be critical for how we’re actually able to do that in this country and compete globally,” she said.

Reynolds noted that the Biden administration is working on ways to both invest in workers and the technology so they can coexist. “How do we see the investments in these technologies really complementing workers and improving the quality of jobs?” she asked.

Ryden said training is going to be paramount in helping dispel any negative narrative around robotics.

“What we have to do, to [Reynold’s] point, is get the workforce trained on this technology, so they can use it, and adopt and feel comfortable when they get to the workforce on how to use this,” he said.

Ruth D. Shiferaw, a freshman at MIT, and Helena De Almeida, a junior at Prospect Hill Academy, also spoke about their experiences as participants of MassRobotics' Jumpstart Fellowship program. Both said they are considering STEM (science, technology, engineering, and mathematics) careers.

Balboa Capital Offers an Overview of the U.S. Robotics Industry
Robots and automation will create jobs and add to the U.S. economy, according to the equipment financing firm.

Alphabet-Owned Intrinsic Lays Off 20% of Workforce
The news comes about a month after the company announced that it was purchasing Open Robotics’ commercial division.