The TDK RoboKit1 platform joins the SmartRobotics family, includes several sensors and controllers, and is compatible with ROS. 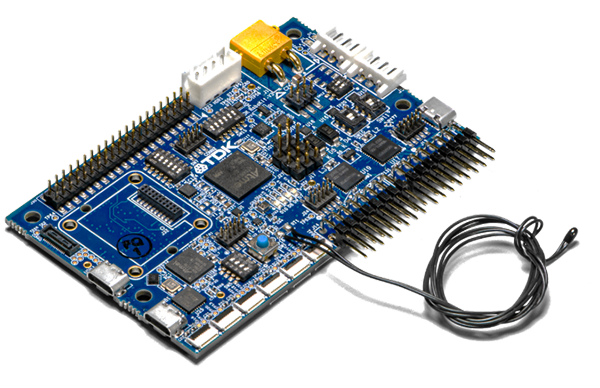 Developers typically have to source and assemble multiple components to build even a basic robot, but suppliers are offering to make the process easier. TDK Corp. yesterday announced the TDK RoboKit1, the latest addition to its SmartRobotics product family. The Tokyo, Japan-based company said at the Consumer Electronics Show that its next-generation platform enables quick prototyping and development for robotics designers, commercial developers, and enthusiasts.

“TDK RoboKit1 provides innovative hardware from multiple TDK group companies, but [it] also provides full software stacks and algorithms that solve real robotics problems,” said Peter Hartwell, chief technology officer of TDK's InvenSense Inc. unit. “This is truly a first of its kind and will help fast-track robotics at any point during the development process, creating feature value that will set customers apart from their competition.”

Founded in 1935, TDK said it supplies electronic and magnetic components for information and communication technologies, as well as automotive, industrial, and consumer electronics. San Jose, Calif.-based InvenSense supplies a range of integrated motion and sound sensors and services for mobile devices, wearables, and Internet of Things (IoT) products. TDK said it serves the robotics industry with sensors, controllers, batteries, and other components.

TDK said it will offer RoboKit1 as both a stand-alone development platform and a full robot reference design. The updated, robust hardware platform complies with the Robot Operating System (ROS) and software algorithms, said the company.

The board will include nine TDK technologies including SmartSensing for any phase of robot development, said Anson Yeganegi, senior management of business development at InvenSense during a virtual press conference. He cited the rapid growth of the robotics market and TDK's offerings for industrial, consumer, surveillance, service, and companion applications.

Robots include numerous technologies, and TDK provides several of them, so it decided to combine sensors on a single platform to facilitate every stage of development, Yeganegi said. “This provides for quick evaluation and software development,” he said. 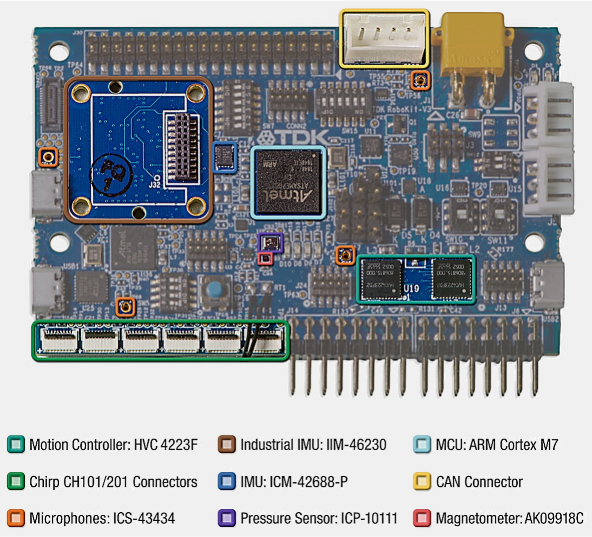 TDK InvenSense has combined components on one board. Source: TDK

Depending on which version of the platform that customers purchase, the board can also come with TDK’s industrial IMU sensor module via flex cables, plus a full robotic chassis, Bluetooth, flex cables, and a 3D-printed casing. The industrial IMU will be available for very early access beyond consumer products, said Yeganegi.

This will enable commercial developers and “prosumers” to build fully functional robots such as vacuum cleaners and autonomous mobile robots (AMRs), said the company. Large customers such as Amazon.com Inc. can also use the board for sensor evaluation instead of development, noted Yeganegi.

“It's not just another development board; it's so much more,” he said. “Depending on the SKU purchased, it comes with all the hardware, plus software libraries and ROS 1 and ROS 2 drivers in open-source format.”

The board starts at $199, and the full robot reference platform with chassis and other modules will be available for $299, said Yeganegi.

The TDK RoboKit1 is available to order now through distribution channels worldwide. The company said it will be available for shipping in the middle of the first quarter of 2022. It doesn't come with a battery, but TDK will provide sourcing information, Yeganegi said.

TDK announces other offerings at CES

Also at CES 2022 in Las Vegas, TDK announced its SmartMotion sensor, which it said has the “industry's lowest power consumption,” is powered by BalancedGyro technology, and has accurate on-chip self-calibration. The sensor can be used in augmented and virtual reality (AR/VR) sytems, robots requiring high accuracy, and drones, it said.

The company also expanded its SmartSound microphone line with the T5837 and T5838 PDM models for consumer electronics. It said they offer 68dBA SNR consuming only 130uA in always-on mode and 330uA in high-performance mode.

The MEMS sensors can provide accurate range measurements at distances up to 5 m (16.4 ft.) over a wide and configurable field of view (FoV) on any surface and under any lighting condition, said the company.

The sensors are designed for AR/VR, home automation, and object detection and obstacle avoidance in AMRs and drones. The ICU-2021 can also be used in applications such as shelf inventory monitoring.