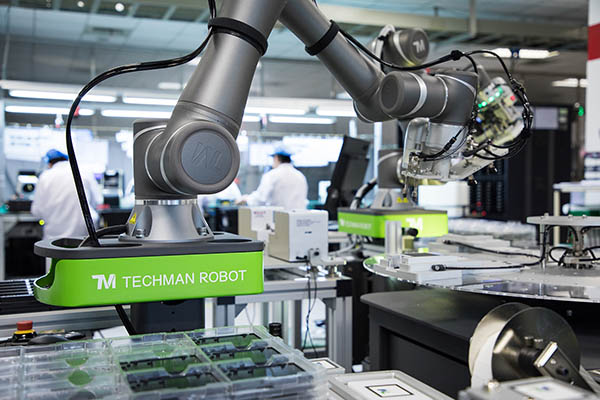 Techman Robot
The newly upgraded TM Robot S made its debut at SIMTOS.
By Robotics 24/7 Staff
·

At the SIMTOS manufacturing exhibition this week in South Korea, Techman Robot Inc. launched its updated TM Robot S. The Taiwan-based company said its collaborative robot includes hardware and software enhancements, smarter integration with vision and peripheral software, and a more intuitive human-machine interface. Techman said the TM Robot S is designed for safety and is suitable for a variety of manufacturing applications.

“We keep developing total solutions to help enterprises and are closing the gap for businesses such as the food and beverage industry,” stated the company. “Due to the pandemic, the demand for automation is surging.”

“TM Robot with built-in vision has offered precision and flexibility through the automation of food preparation,” it added. “Besides, it provides human safety and food hygiene safety at the same time. Several well-known companies have implemented TM Robots. From food to electronics manufacturing, it can be applied in a wide range of industries.”

Techman said at SIMTOS that the TM Robot S series has obtained 31 safety certifications, including from Europe and the U.S. Techman claimed that it is the most advanced cobot arm with the most certifications in its space.

In response to various industrial applications, Techman has upgraded the dust and water resistance level of the S series and launched a newly developed teach pendent to make training and deploying robots easier and faster.

More powerful offline programming software can be used for application path simulation and cycle-time calculations, according to the company.

Techman Robot said it has launched an exclusive welding operator to helps users weld different-shaped workpieces. It is compatible with the well-known welding products from OTC and Panasonic.

The operator can be controlled directly through the robot interface and is no longer limited by the traditional way of using welding robots, said Techman. It can provide visual-assisted positioning and uses hand guiding to teach welding on points and tracks intuitively and quickly, offering Japanese and global systems integrators the ability to develop more welding applications for TM Robots.

Looking ahead to the second half of 2022, Techman Robot said it is optimistic about the development of automation. The company plans to continue to build its distributor network and recruit systems integrators for the semiconductor, electronics, and food markets. They will also jointly explore the Korean market.

“With smart vision [and a] fully upgraded collaborative robot, Techman Robot will assist the enterprises to the future of smart manufacturing,” said the company, which OMRON Corp. acquired 10% of in November 2021.

Techman Robot
The newly upgraded TM Robot S made its debut at SIMTOS.