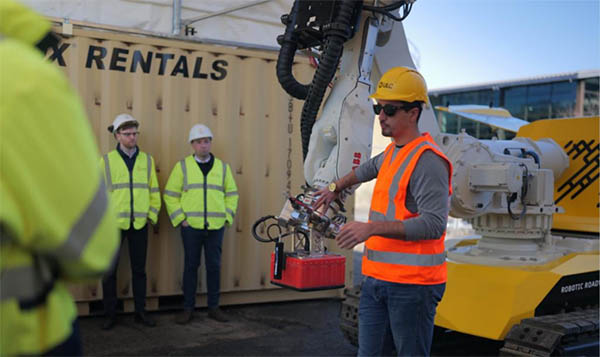 Excavations are often necessary for utility inspection and maintenance, but they can disrupt traffic, be labor-intensive, and damage adjacent structures and plant life. ULC Technologies today said that it has successfully completed a stakeholder demonstration of its Robotic Roadworks and Excavation System, which has made its U.K. debut.

The demonstration was the final milestone of a project with gas distribution network SGN. The U.K. Office of Gas and Electricity Markets, or Ofgem, funded the three-year project.

“I'm feeling great. It's been a couple of years that we've been doing this development, and finally seeing the system in action in its final home in London—it's the best feeling,” said Ali Asmari, Robotic Roadworks and Excavation System (RRES) project lead at ULC.

ULC, which has offices in Hauppauge, N.Y., and Feltham, U.K., offers its proprietary hardware, machine learning, and services through a robotics-as-a-service (RaaS) model.

ULC developed the Robotic Roadworks and Excavation System with SGN. The RRES has a robotic arm with hot-swappable tooling to allow for additional tool development. The goal is to help multiple industries minimize disruption and enhance operational safety, according to the companies.

In 2021, ULC and SGN demonstrated the system's capabilities for below-ground scanning, coring, and soft-touch vacuum excavation. Over the past year, ULC’s RRES project team has worked on system enhancements, extensive testing, and spin-off projects associated with those capabilities.

Since RRES arrived at SGN’s site in Epsom, U.K., last month, Asmari has been recalibrating the system and conducting extensive testing. He has also been training Wayne Hargrave and Amadeus Smith, ULC's U.K. operatives, on how to operate the system.

Last month, ULC and SGN hosted a demonstration of the Robotic Roadworks and Excavation System. They welcomed guests from RPS Group, Transport for London (TfL), and the Croydon Council. It was the first opportunity for many industry stakeholders to see RRES in person and to learn about the system’s capabilities and how it could help transform roadworks.

“We’re looking forward to the continued testing of the system across a wide variety of new environments,” said ULC.

ULC and SGN are planning field trials across SGN’s network in the coming months and said there will be more opportunities for stakeholders to see the ground-breaking system conduct a full end-to-end excavation process.

MissionGO’s New President Aims to Take Company to New Heights
Chris Corgnati has been the president of MissionGO since February.