Mobile devices are getting significant upgrades that will improve point-of-use and enterprise productivity. 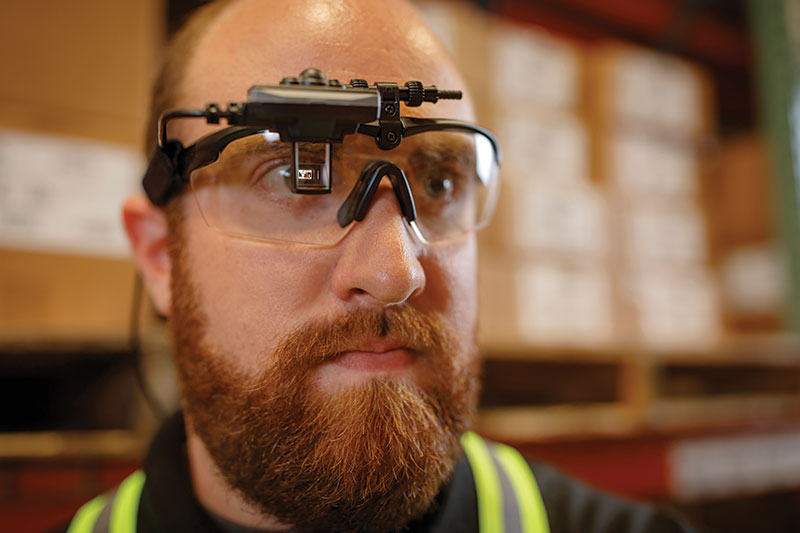 Mobility has long been a prized asset in the distribution center. And, it has typically been best known for its small terminals, tablets, scanners and more that allow DC associates to roam from one end of the facility to the other as the workflow demands. But, there’s a new world emerging as you read this.

The devices themselves are evolving and further enhancing ease of use and mobility. Clearly, devices remain an important part of the equation, but there’s more to it. Increasingly, devices are connected to platforms that make data management from the server to the picker and back again easier and faster. Quite simply, mobility in the warehouse and DC is building its own ecosystem. 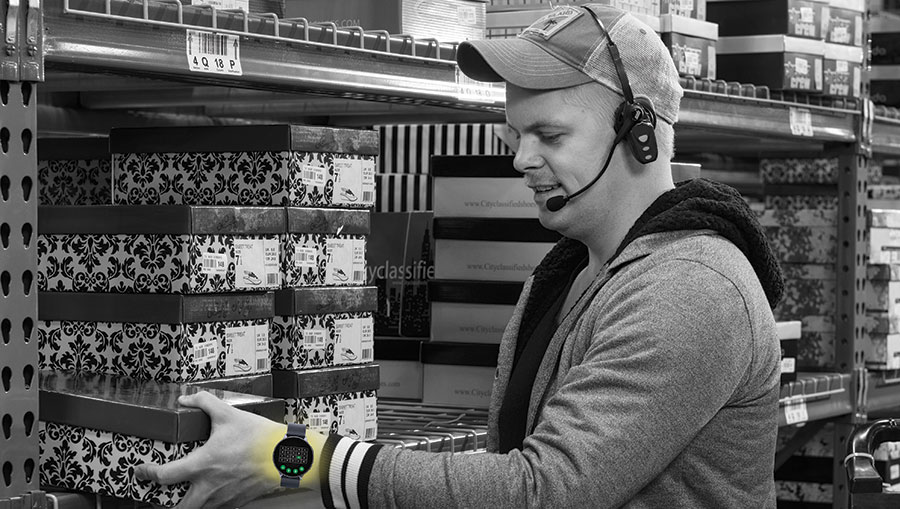 In the first of its kind, a wireless scanner feeds data to a smart watch that guides the associate’s pick and place activities.

As Mark Wheeler, director of supply chain solutions at Zebra Technologies, says, “the story in mobility right now is to build systems that are easy for IT to manage and for operations to get the information they want and need—when they want and need it.”

On the surface, both of those value propositions sound fairly straightforward. But as mobility experts make clear time and again, this is a long process that is only partially along the way to full adoption.

Let’s start with the gear associates wear and hold in the facility. One estimate is that 80% of facilities are lagging when it comes to mobile devices. Yes, paper is still widely used to track transactions on the floor. Meanwhile, others continue to use heavy scan guns that have been virtually eliminated by suppliers.

Now there’s a focus on operating systems for the devices. Most in use are TelNet based that require people to use keys in a specific sequence for many transactions. Bar code scanning and voice are typically part of the mix, but there’s no getting away from the role of keys in certain aspects of completing the data collection and management process.

“The next stage here is touchscreen-optimized devices that provide a user experience more like the smart phones that associates have been using for some time,” says Wheeler. He adds that the shift to Android devices is replacing Windows mobile systems, which Microsoft stopped supporting with new updates in late 2019.

The shift to Android, says Keith Phillips, president and CEO of Voxware, is based on three key reasons—easier to use, more efficient and a better return on investment. He goes so far as to call the shift to Android as “a freight train on a downhill slope.” 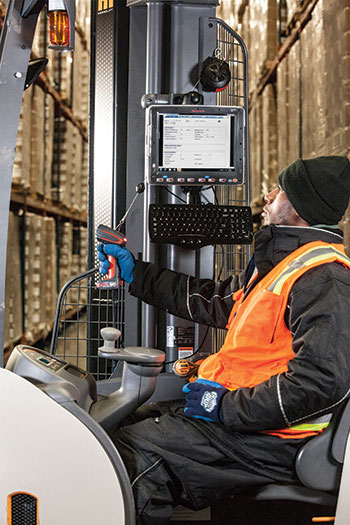 While touchscreen devices are on the rise, don’t expect them to entirely displace keyed mobile devices, says Scot Stelter, director of offering management for Honeywell Productivity Solutions and Services. Keyed devices will still be part of the mix, he asserts. However, he fully expects these and touchscreen devices to be the two dominant form factors going forward.

That said, not all devices are created equal. As Stelter explains, the warehouse mobility device market is divided into two camps. One focuses on upfront cost while the other on a lower cost of ownership. Such a split is hardly unique in capital expenditures, but it means that mobile device selection falls into two buckets.

One is lower cost units that use standard consumer chips with an expected lifetime of two to three years. The other uses more advanced chips with five to eight-year lifecycles. Stelter says smaller companies tend to skew toward the former while larger companies to the latter.

Ultimately, it’s a tradeoff of disposability akin to consumer mindsets with smart phones compared to extended system stability for more complex IT systems. However, both deliver enhanced mobility of the associate and increased versatility of the system.

Andrew Herchek, senior manager of mobility at Cognex, sees it this way. “Devices need to improve people’s productivity, be durable and easily connect with IT systems, especially warehouse management systems (WMS), that direct activities.” More on the connection equation in a little bit.

Asking the right question
The challenge is often to drill down to the right question, explains Voxware’s Phillips. He says the core issue is what device, operating system and form factor best enables the associate’s daily activities. Phillips adds the answer to that should form the base for the company’s mobile device selection and strategy.

No question, plenty of options are out there. From long-range scanners to ring scanners and highly ruggedized terminals and tablets, the point is to match the device to the application. Stelter of Honeywell says: “It’s a matter of streamlining and error proofing people’s work with devices that make it easier, simpler and faster to collect, use and manage data.”

In fact, people are becoming even more attached to their mobile devices than ever, explains Stelter. “Some facilities now assign each device to an individual, making the two a team,” he says. And in a pandemic, that might not be a bad approach for medical reasons, too.

At the same time that form factors are consolidating, some experimentation is out there.

One from Honeywell is a scan engine capable of two independent optical paths. This enables it to capture both near- and far-range images including bar codes simultaneously. For instance, it can simultaneously read a bar code, and, using a wide-angle image, record its surroundings.

“People are trying to leverage form factors to put the right equipment in the hands of people,” explains Justin Ritter, director of project operations at Lucas Systems. He and Steve Yurrick, director of speech and mobile technologies at Lucas, talk about a recent innovation—a multi-modal picking system that runs on an Android smart watch.

They say the first application is at a UK third-party logistics (3PL) provider that operates a multi-channel DC for one of the country’s largest cell phone retailers. Previously, the operation was guided by a radio frequency portable terminal-based picking process paired with ring scanners.

While highly accurate and mobile, the screen- and scan-based process actually added unnecessary time to each pick. Scanning could not be entirely eliminated because many of the products have unique product identification numbers. However, the WMS- directed pick-to-cart process was not especially time efficient.

The solution was to move to wireless pendant scanners connected by Bluetooth to a smart watch on the picker’s wrist. The watch indicates which of six possible totes each item should be placed. Pickers confirm each step with a spoken command, similar to standard voice picking applications. Initial reports are that productivity increased more than the targeted 34%.

According to Yurick, this is the first time voice has been used on a smart watch, and “is not a novelty application.”

Also notable is Zebra’s foray into head-mounted displays. If you’re looking for a visual, think back to Google glasses. Zebra’s Wheeler says the display enables hands-free directed workflows. Instead of constantly redirecting attention to an out-of-view screen on a separate mobile device, the associate reads the needed information directly from a tiny screen mounted on the glasses.

A mounted camera can also feed to a remote location a full view of what the person is seeing. Meanwhile, the glasses can receive and display an augmented reality feed from a remote location to aid problem solving right at the point of interest.

Tying it all together

As all of this is ongoing, the IT framework connected to mobile devices is changing, too, says Hilmer Rivera, global general manager of software for Honeywell Productivity Solutions and Services.

“The supply chain is in the early stages of moving from solutions to platforms that create a single umbrella for various applications including mobility,” Rivera says. “The key is business outcomes not software features. So, when Honeywell recently worked with a large European parcel carrier, the company started out wanting to unify three software features. By the time they were done, they had a widely integrated platform with 30 features. Just as important, productivity increased,” adds Rivera.

Honeywell addresses this with its Mobility Edge platform that unifies all form factors of hardware along with software. Designed for Android, Mobility Edge includes communication protocols, a common operating system for multiple generations of Android and a common Honeywell software system that supports non-Honeywell devices. “By providing a unified hardware and software platform, it optimizes operations while strengthening security,” says Rivera.

Over at Zebra, Mobility DNA fully integrates Android mobile devices with enterprise-wide systems. The platform enhances broad connectivity to all key IT systems, ensuring streamlined workflows that maximize all mobile resources across the enterprise.

Clearly, mobile devices are on the move. Or as McCurry of ScanSource says: “Now is the time to lean into upgrading mobile devices.”

Mitsubishi Logisnext Asia Pacific and xSQUARE Partner to Expand Presence in the Asia Pacific Market
The companies are working together to expand their material handling offerings.