The new products include WiBotic's first passively cooled onboard charger and two transmitters that use GaN Systems' gallium nitride technology for efficiency. 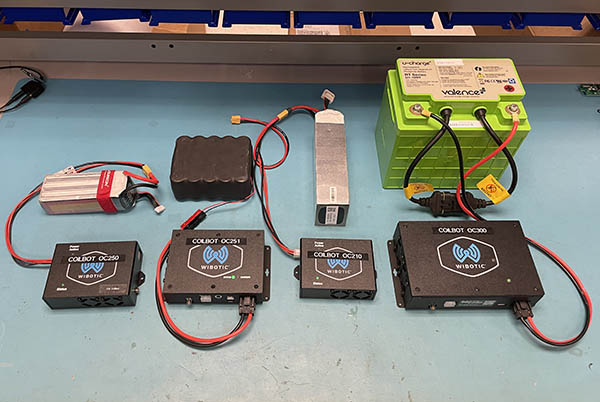 WiBotic
New onboard chargers are designed for a variety of mobile robots.
By Eugene Demaitre
·

Power management is a major concern for designers and users of robots and drones, whether indoors, in the air, on the water, or in space. WiBotic Inc. today announced new chargers and transmitters for drones and autonomous mobile robots. The Seattle-based company said its new products demonstrate its expertise in providing efficient charging systems for robots that operate in all sorts of environments, even under harsh conditions.

“These new products not only push that technical envelope but are also designed to survive in the most extreme operational conditions,” stated Ben Waters, CEO of WiBotic. “And when used together with WiBotic software, they now let operators track and optimize the performance of individual batteries within large and diverse collections—whether charging is performed manually or fully autonomously.”

In addition, WiBotic is demonstrating an innovative use for onboard chargers at AUVSI Xponential in Atlanta this week. “As drone service providers will attest, it can be difficult to keep track of individual battery health when large collections of diverse batteries are manually charged for repetitive field use,” said the company.

WiBotic said its new Commander fleet energy management software enables its onboard chargers track and report on individual battery charge cycles, termination voltage, charge rate, and other factors that determine how a battery will perform from day to day.

The new products include the OC-262 onboard charger (OC), which was originally developed as a ruggedized system for the U.S. Department of Defense. It was released in response to customer demand, said WiBotic.

The OC-262 can provide up to 300W of power, has no moving parts, and supports all common robot battery chemistries. It pairs with a weatherproof receiver antenna for outdoor use and is suitable for the oil and gas, mining, construction, marine exploration, and agriculture industries, said WiBotic.

The OC-262 is available in an ST model with an IP20 rating for applications that require passive cooling but can be more open to the environment. The WP model has an IP67 rating for outdoor or extreme environments, according to the company.

The ruggedized OC-262 onboard charger comes in two models, depending on the environmental and cooling requirements. Source: WiBotic

The OC-150 onboard charger is designed for unmanned aerial vehicles and smaller robots, delivering up to 150W of power and up to 10A of current, depending on battery voltage. It supports multiple battery chemistries and has an output voltage range of 9V to 58.5V.

The compact TR-150 transmitter uses the latest gallium nitride (GaN) transistors from WiBotic partner GaN Systems Inc. It is designed primarily for use with the OC-150 but supports all WiBotic onboard chargers when deployed in diverse robot fleets. Delivering up to 150W of power, its new GaN-driven power amplifier has a 95% efficiency – leading to end-to-end wireless power system efficiencies of 85% or more, claimed WiBotic.

The new TR-300 transmitter also uses GaN Systems’ technology and delivers up to 300W of power when paired with WiBotic’s OC-262 or OC-301 chargers.

Can you give an example of a robot that will benefit from the passively cooled OC-262 onboard charger?

We just recently engaged a customer who is deploying it in an animal feeding operation where dirt, water, and corrosive gasses and liquids are present. In fact, the wireless power system announced by Clearpath Robotics for its Husky robot a couple months ago uses the new OC-262.

Another customer that makes a quadruped outdoor robot has a situation where the inside of the robot is fully sealed from outside air. Circulating air for cooling in that space is not an option, since the air would simply continue to heat up. It uses the OC-262-ST, since the electronics are protected inside the robot, so it doesn't need the OC itself to be waterproof. But it still needs the ability to cool the charging circuit by dissipating heat passively—directly through the robot’s metal body.

How does the OC-150 compare with other chargers for smaller robots and UAVs?

Carlson: The OC-150 is very similar in size and weight to our previous OC-210, but at 150W, it has 25W of additional power. It also includes all of our latest circuitry for reduced EMC emissions and more efficient overall operation.

We’re announcing its availability right now for anyone who would like to purchase an evaluation unit. [We] will be immediately certifying if for production use in the U.S., EU, and beyond.

Evaluation units of the OC-150 onboard charger are now available. Source: WiBotic

What did GaN Systems and WiBotic need to do to make sure that their high-efficiency system could serve different robot types? Are there standards that are applicable?

Carlson: The ability to service multiple robots—regardless of their battery chemistry or voltage—from the same transmitter is a feature that is actually built into the entire WiBotic system and isn’t specifically related to our use of GaN technology. We do this by making all of our onboard chargers configurable in software.

When they are installed on a particular robot, the battery chemistry is identified and stored on the OC so the proper charge cycle is used. The max charge voltage is also stored along with the desired charge rate in amps. When a robot approaches the transmitter, our control radio completes a handshake so the transmitter knows how much wireless power to send.

But it’s only after the wireless power reaches the OC on the robot that it is converted into the final voltage and current for that particular battery. This lets our transmitters service any robot, since it doesn’t need to know the battery chemistry, voltage or charge rate—just the total amount of universal wireless power to deliver.

As of now, there are no approved and widely adopted standards for wireless power systems operating in the several-hundred-Watt range, so our system is universal across WiBotic-powered devices. We look forward to supporting more open standards in the future.

What sorts of robots is the TR-300 ideal for?

Carlson: As one of our higher power systems, it is best for medium to large robots, such as those used to shuttle freight in e-commerce fulfillment centers.

Many outdoor inspection robots are also a good fit, since they need to operate fully autonomously in all weather conditions. The IP54 outdoor-rated version the TR-150 and TR-302 are perfect for those applications. In short, larger robots require larger batteries, and a larger charging system to keep them charged – so those are the focus for the TR-302.

For now, we also still sell the TR-301 transmitter, which also delivers 300W. It is a physically larger unit, though, and we’ve made many improvements with the new TR-302. Once we complete the certification process for the TR-302 in the next month or two, we’ll likely discontinue the TR-301 in favor of the new model. All of our products will remain compatible, however, so it will be easy for customers to make the switch when buying new systems.

What reception has the WiBotic Commander power-management software gotten from operators so far?

Carlson: Commander response has been very positive, and we’re adding more users on a regular basis. Commander becomes most useful when there are larger numbers of robots in the fleet, and some customers are still just at the beginning of their robot deployments.

Having detailed information on each robot’s battery, and the overall charging process across all robots, has been a valuable part of those deployments. Without it, operators would be forced to guess at where to place charging stations and likely wouldn’t as readily know the status of each charging station—available, occupied, offline. We’re also adding more features and better report-generation capabilities for Commander in the near future. 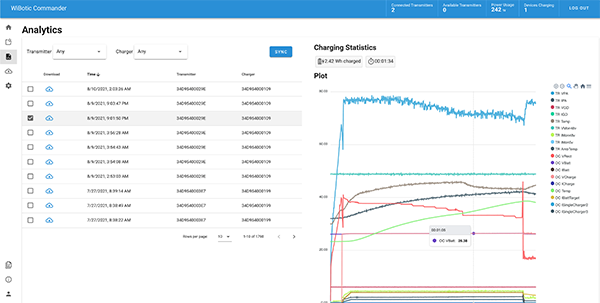 WiBotic
New onboard chargers are designed for a variety of mobile robots.