Virginia Tech finds that previous surveys of public opinion may have underestimated the appeal of drone delivery services. 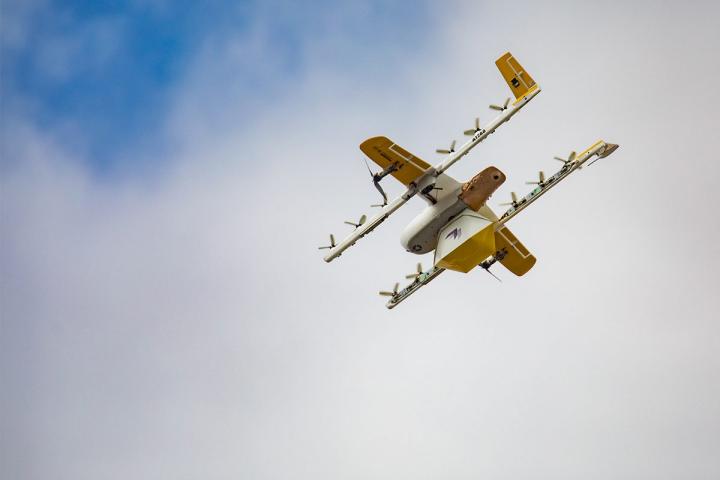 Virginia Tech
The first drone-delivery service tests in Christiansburg, Va., gave researchers a unique opportunity to study how people feel about the technology when they've actually experienced it in their own community.
By Robotics 24/7 Staff
·

Federal regulations, increasing levels of autonomy, and a desire for fast, contactless delivery have converged to propel drone delivery services. As test flights continue, data about consumer adoption is encouraging. During Thanksgiving week last year, residents of Christiansburg, Va., received a survey via mail. The postcard had an image of a yellow-winged drone carrying a small cardboard box. It was familiar to the people in that town, because it was the first place in the U.S. to have a residential drone delivery service, provided by Wing.

The survey's 20 questions were designed to measure how Christiansburg's 22,000 residents felt about drone delivery—the first time that this question had ever been posed to a community that had actually experienced the service. The survey was developed and conducted by researchers from the Virginia Tech Mid-Atlantic Aviation Partnership (MAAP), a federally designated drone test site, and Lee Vinsel, an assistant professor of science, technology, and society in the College of Liberal Arts and Human Sciences.

The poll found that 87% of people who responded to the survey said they liked the idea of drone delivery. The positive results, published in the spring issue of Issues in Science and Technology, validate a technology just beginning to make the transition from research to retail, said Virginia Tech.

Interest in drone delivery is rising. Google parent Alphabet's Wing subsidiary said its service in Christiansburg was among the most advanced of the handful of trial services operating today. But drone technology—and the laws that regulate it—are maturing, and Virginia Tech said it expects services like these to become routine in the next few years.

Whether they're successful or not will depend in large part on how the public responds. Delivering packages to homes unfolds in the public eye to a greater extent than many other applications for drones: People may see the drone in the commercial area where it picks up its cargo, at the customer's house, and in the neighborhoods in between.

Accurate estimates of public opinion are critical for the regulatory agencies developing rules that will govern its use, as well as the state and local governments considering whether to encourage drone deliveries. In addition, such estimates are useful to the companies developing these services and hoping to scale their businesses.

Until now, data has been limited and usually not encouraging. The handful of surveys on this topic have pegged public support for drone delivery at around 50% in the U.S. and lower in Europe and the U.K.

But several factors suggest that those anemic results might not be definitive. First, crucially, these surveys polled people who had almost certainly never received a delivery by drone, and were speculating about a service they were imagining rather than reporting on one they'd experienced.

Second, many of the survey questions frame their questions in a way that implies risk, asking respondents to rate their level of concern about potential problems selected by the researchers in advance. Highlighting potential negative outcomes may prompt a more negative overall sentiment.

“Gauging people's reactions to new technologies can be really difficult, including because it's so easy to bias respondents' views,” Vinsel said. “We wanted to create a survey that was as neutral as possible to examine sentiments about drone delivery. And Christiansburg was a great opportunity for us because it was a unique population that had actually experienced these systems.”

The survey asked respondents about standard demographic factors and their typical response to new technologies. It asked about how familiar they were with drone delivery, how they'd found out about it, and what their general attitude toward it was.

Instead of asking about specific risks and benefits, the researchers asked open-ended questions about what the respondents saw as positive and negative aspects of the technology.

The survey was approved by the Virginia Tech Institutional Review Board. Wing helped fund the survey development and distribution through an existing research contract with MAAP, but the analysis was funded entirely by Virginia Tech.

Adeline Guthrie, a graduate student in the statistics in the College of Science and a collaborator with the Statistical Applications and Innovations Group, assisted with data analysis.

The results were resoundingly positive (download PDF). Not only did 87% of respondents report positive sentiment about drone delivery; 89% indicated either that they were likely to use the service or already had, and 49% reported liking the idea of drones used for package delivery more than drones used for other purposes.

All of these results are dramatically different from those of other surveys, in which positive sentiment never exceeded 51%,  and delivery was a relatively unpopular application when ranked against others.

The survey also asked respondents if their opinion had changed since the pandemic. When COVID-19 hit Virginia in March, the number of people signing up for Wing's service and ordering drone deliveries spiked. Wing partnered with additional local businesses and worked with a school librarian to deliver books.

The survey results suggested that these contributions had helped. The pandemic popped up frequently in the open-ended question about positive aspects of the technology. Fifty-eight percent of Christiansburg survey respondents said that their opinion of drone delivery had improved—a much bigger boost than was measured in a 2020 survey from the Consumer Technology Association that polled a general population sample.

Here again, Christiansburg residents' experience with drone delivery may have contributed to the jump—seeing a favorite coffee shop find a new way to reach customers without in-person shopping or a neighbor's child receiving a delivery of sidewalk chalk and crackers may resonate more than an abstract appreciation for contact-free delivery.

MAAP worked with Wing to launch the drone delivery program under the federal UAS Integration Pilot Program, a drone-integration initiative that brought together state agencies, local governments, and companies to advance the rollout of drone applications that could benefit communities. The trial is continuing under the IPP successor program BEYOND.

MAAP and Wing conducted months of community outreach before the service launched, talking to thousands of Christiansburg residents about what the service would look like.

“One of the goals of the IPP was to take a community-oriented approach to drone integration,” said Tombo Jones, director of MAAP. “There's not a shortcut here. You need careful, methodical research to demonstrate that the system is safe and reliable. Then you can take that information out into the community, and talk to people to learn what they're looking for and what their concerns are.”

“It's rewarding to see how positive the results of this survey are, because they show that, when it's done the right way, developing new applications for drones can have a genuinely positive impact on a community,” added Jones. 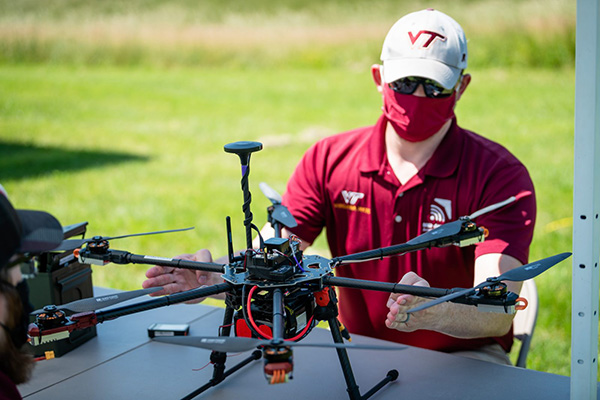 The team is hoping that future research will reveal more detail about how people's opinions evolve before and after they're exposed to drone delivery, the aspects of drone delivery that inspire the greatest enthusiasm or strongest skepticism, and what factors help determine how someone will feel about the technology.

“The key thing is that speculation about technologies is different than actual experiences with them,” Vinsel said. “Lots of factors influence how we feel about the technologies in our lives, but something scholars have found repeatedly over for the last 60 years is that familiarity breeds acceptance. To be at an early point in the rollout of this technology and be able to study a population that has actually experienced it is pretty exciting.”

Virginia Tech
The first drone-delivery service tests in Christiansburg, Va., gave researchers a unique opportunity to study how people feel about the technology when they've actually experienced it in their own community.