AUVSI XPONENTIAL 2022 Focuses on Use Cases, Regulation, and Workforce of the Future

From drones to self-driving trucks, experts in emerging technologies discussed the industry's challenges and potential at AUVSI XPONENTIAL. 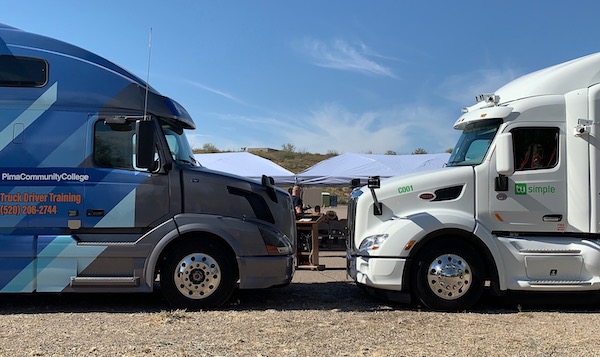 The Association for Uncrewed Vehicle Systems International, or AUVSI, held its annual XPONENTIAL show earlier this month in Orlando, Fla. The week was a collection of valuable keynote addresses and panel discussions, with a great showing of exhibitors and attendees focused on all things autonomous.

The show is a bellwether for the future of autonomy and uncrewed systems as a wide portfolio of technologies matures. The result is a kaleidoscope of autonomous vehicles, including aerial drones, driverless trucks, watercraft, underwater submerged vehicles, and a whole lot more.

Such technologies will undoubtedly change our daily lives in the near future, but there are numerous issues to resolve. They include questions such as how would a highway patrol officer pull over an autonomous vehicle? Will the public accept drones flying overhead for photography or utility purposes? How will new air traffic be managed?

Defense and security agencies stand to benefit from drones that can fold into a holder worn on a soldier's belt. They can carry a sufficient payload to carry surveillance gear and travel for a duration of as much as 35 minutes beyond visual line of sight (BVLOS).

The Automated Goods Movement Summit took place early in the AUVSI conference. A panel on “What is a Law Enforcement Interaction Plan?” explored the challenge of planning for autonomous trucks, aircraft, and other vehicles.

“It is a document written by law enforcement for law enforcement,” he added. “It provides recommendations to law enforcement agencies for developing protocols and policies to provide consistent direction to all officers [within a specific domain] on how to interact with an autonomous vehicle.”

The discussion was led by Ursimo, with participants from the highway patrol and state police from Ohio and California. The discussion focused on setting law enforcement interaction plans (LEIP) and the many challenges that lie ahead in developing and implementing them.

LEIPs can help states establish policy around a variety of issues associated with the emergence and adoption of autonomous vehicles. For instance, AutoX offers a LEIP to aid authorities.

Safety is paramount for the AV industry

Autonomous vehicles (AVs) must comply with stringent safety standards for regulator and public acceptance. A presenter on the topic noted that many road accidents are a result of human error.

The California Highway Patrol panelist pointed out that while the public has may have questions about self-driving cars, they are actually safer than human performance.

In California, there are about 4,000 fatalities per year resulting from human error, said the speaker. Even if autonomous vehicles make a small improvement in the number of safety incidents, they could save about 200 lives annually.

For the autonomous vehicle and uncrewed systems industries to grow, they must overcome a major challenge: a skilled workforce that also grows to support them. Several universities and vocational schools were represented at AUVSI XPONENTIAL.

Programs that prepare students to enter the autonomous transport field are still in the early stages of development, but more are now available. For example, Pima Community College has developed a curriculum to train and fill positions in the next-generation workforce.

Arizona is a state that is friendly to the development of autonomous vehicles and their implementation in the transportation ecosystem, said Amanda Abens, dean of workforce development and continuing education at Pima Community College. Because TuSimple has a presence near the college, it was a prime partner, she said.

Pima's efforts and partnership are representative of what we could see in many communities throughout the U.S. as autonomous transportation becomes mainstream.

Einride gets a grip on autonomous freight

Global supply chain challenges are still in the daily news. XPONENTIAL took a hard look at how companies are collaborating to develop autonomous freight delivery.

Einride touted its electric and autonomous Pods as not only contributing to the potential decarbonization of the logistics industry, but also as a way to give transportation providers more capacity.

Thomas Olsen, founder of Einride, described the Stockholm-based company as a developer of cloud-based software as a service (SaaS) for autonomous systems. It is also developing “capacity as a service” or “CaaS.”

For instance, Einride recently announced a partnership with A.P. Moller-Maersk, which is adding 300 connected electric trucks to its North American network. It claimed it is one of the largest heavy-duty electric truck deployment to date. The trucks will use Einride’s Saga data-driven operating system.

Einride plans to deliver the trucks between 2023 and 2025 and said it will electrify Maersk's North American warehousing, distribution, and transportation businesses in select U.S. cities.

Autonomous and uncrewed vehicles are still in early adoption, but they are proceeding with a bit more momentum than in the past. AUVSI XPONENTIAL not represented a sector aware of the issues, but it also demonstrated a “getting out of quarantine” attitude among engineers, scientists, and professionals of all types back in conference mode. They're ready to roll in developing and deploying new technologies as this crucial sector takes shape.