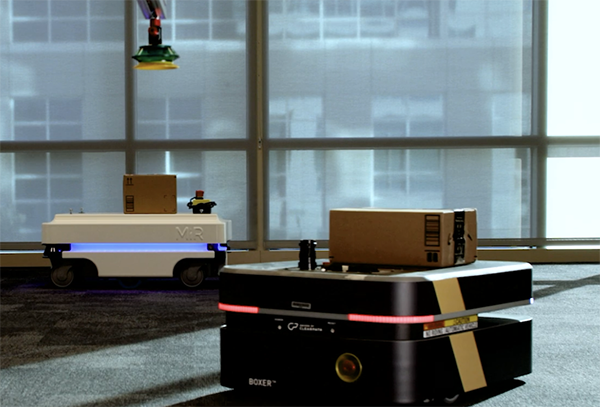 Leading into this week's re:Invent event, Amazon Web Services has announced the launch of AWS IoT RoboRunner, a new service intended to make it easier for companies to build and deploy applications for robotic fleets. The unit of Amazon.com Inc. also announced the AWS Robotics Startup Accelerator in partnership with MassRobotics.

AWS re:Invent, which is being held this week in Las Vegas and virtually, is Amazon Web Services' annual event featuring numerous technology announcements and user workshops. Amazon said that the AWS IoT RoadRunner and the AWS Robotics Startup Accelerator reflect its ongoing commitment to helping robotics developers, including through the AWS RoboMaker simulation service.

The company previously held a virtual robotics accelerator in August.

AWS IoT RoboRunner is built on the technology already in use in Amazon's e-commerce fulfillment centers and is available to robotics developers. The company said it developed AWS IoT RoboRunner to focus on robotic fleets and potentially enable interoperability.

“In 2018, we launched AWS RoboMaker, a cloud-based simulation service that enables robotics developers to run, scale, and automate simulation without managing any infrastructure,” said Channy Yun, principal developer advocate for AWS. “As we worked with robot developers and operators, we have repeatedly heard that they face challenges in operating different robot types in their automation efforts, including autonomous guided vehicles (AGVs), autonomous mobile vehicles (AMRs), and robotic manipulators.”

“Today, we are launching a public preview of AWS IoT RoboRunner, a new robotics service that makes it easier for enterprises to build and deploy applications that help fleets of robots work seamlessly together,” he wrote in a blog post. “AWS IoT RoboRunner lets you connect your robots and work management systems, thereby enabling you to orchestrate work across your operation through a single system view.”

The new service runs in the AWS Management Console and creates a centralized repository for facility, robot, destination, and task data, said Yun. Developers can use the Fleet Gateway Library to develop code for integrating robots with warehouse management systems (WMS), and the Task Manager Library can make it easier to allocate tasks, he said.

The AWS Robotics Startup Accelerator is open to hardware and software startups around the world, said Werner Vogels, chief technology officer of Amazon. Amazon Web Services and MassRobotics partnered in response to the need to help startups overcome technical and business challenges, he said.

“Robots are becoming more and more commonplace in our world, playing roles in everything from performing surgery, to cleaning the floor, to teaching young children,” he wrote in a blog post. “With the prevalence of robots operating in a variety of industries, it may look like we’ve reached a new age of robotic proliferation, but really, there are still many barriers for robotics companies to overcome to create the impact they know they can make. This is why AWS is excited to announce its strategic collaboration with MassRobotics to launch the AWS Robotics Startup Accelerator, focused on guiding and mentoring a cohort of robotics startups.”

“For as much as the production barriers to robotics have been lowered, building a robotics startup still requires multidisciplinary expertise in mechanical engineering and electronics, as well as AI/ML [artificial intelligence and machine learning],” Vogels added. “It’s challenging for startups to find people who are skilled in both traditional hardware and newer technologies such as AI/ML.”

“Additionally, robotics startups need to invest their scarce resources on domain-specific value-add activities to carve a niche and accelerate their time to market,” noted Vogels. “Today, there are only a few successful commercial robotics companies, and there are a few big reasons for this. First, finding a fit in the robotics product market is difficult because real-world environments are dynamic and unpredictable, so pairing the right niche with the right capabilities can be a challenge.”

“Second, building robots with a high degree of autonomy and intelligence requires multidisciplinary skills that are hard to find and recruit for,” he explained. “Third, robotics is capital-intensive and requires large upfront investment in sensors, actuators, and mechanical hardware, even when they’re already commercially available.”

“When I talk to AWS customers, they tell me it’s critically important to develop capabilities across multi-disciplinary areas including AI/ML, simulation, data streaming, edge processing, and robotics management,” Vogels said. “They ask for guidance implementing solutions for security, reliability, right-sizing, and provisioning for future growth. In addition, they’re looking for advice on well-architected designs, partner selection, channels like AWS Marketplace on which to market, and device qualification services.”

The accelerator will offer hands-on training with Amazon Web Services robotics technologies and up to $10,000 in credits for AWS Internet of Things (IoT), robotics, and ML services.

In addition, startups accepted into the four-week, virtual program will be able to consult with experts at AWS and MassRobotics on business models and overcoming technical challenges.

MassRobotics is dedicated to helping the Boston-area robotics community grow through shared space and services, a network of innovators and entrepreneurs, and events. Successful members of the organization include Activ Surgical, Realtime Robotics, and Waypoint Robotics—which Locus Robotics recently acquired, noted Vogels.

“With the massive adoption and deployment of robotics solutions in manufacturing, logistics and other sectors, the need and reliance on cloud technologies have grown exponentially,” said Fady Saad, co-founder and vice president of strategic partnerships at MassRobotics. “We are excited to establish this program to help robotics startups accelerate their growth and solve big challenges by using AWS.”

The nonprofit has worked with other strategic partners including Festo, General Motors, Panasonic, Analog Devices, and Mitsubishi Electric.

MassRobotics is now accepting applications from qualified startups (with less than $10 million in revenue and less than $100 million raised) for the accelerator program, and registration closes on Jan. 16, 2022. An informational webinar will be held from 12:00 to 1:00 p.m. EST on Jan. 10, 2022.