Covision, which makes AI software for visual inspection, is hoping to expand its U.S. customer base. 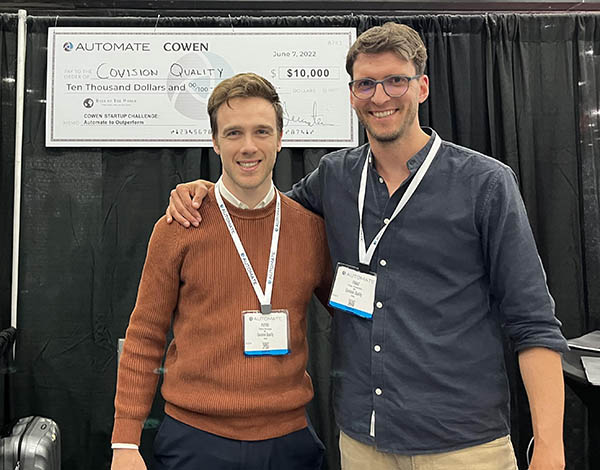 DETROIT—Last week at the Automate 2022 trade show and conference here, Covision Quality was awarded the $10,000 top prize in “The Cowen Startup Challenge: Automate to Outperform” competition.

South Tyrol, Italy-based Covision Quality makes software using machine learning and computer vision that scales and automates “visual inspection and defect inspection on metals and plastics,” according to its website. The startup is a spin-off of Covision Lab, which is backed by seven multinational technology companies, including Durst, Microtec, alupress, TTControl Hydac International, Microgate, Mirco Photon Devices, and Barbieri.

Covision Quality said its customers include manufacturers in the “downstream industry,” including GKN Powder Metallurgy and Aluflexpack.

Its partners include NVIDIA, the German AI Association, Tum.ai, and iMAGE S.

Covision Quality has made a lot of strides in the nearly three years since its founding, said Franz Tschimben, CEO of Covision Lab. He told Robotics 24/7 that the company has customers in Italy, Germany, Croatia, and the U.S.

The software company said it takes advantage of technologies such as deep learning, 3D modeling, and image processing to complete its work.

The competition was sponsored by Cowen Inc., an independent investment bank. The multinational company is based in New York.

Tschimben said the company came to Automate “with a specific goal to win the competition in order to generate visibility in the U.S. market.”

Covision Quality said it plans to use the $10,000 to cover some of its expenses, though Tschimben noted the biggest benefit of being recognized is the marketing value. He said the company is in the process of doing its first installation in the U.S.

The company also attended the show hoping to generate partnerships with systems integrators.

“When we go to a new production line, we would love to partner up with system integrators who have experience in setting up systems for whole production lines,” Tschimben said.

Exyn and Trimble Outfit Spot Robot With Scanning, Mapping Systems for Construction Industry
The companies said they provide customers with the tools they need to create detailed maps for construction tasks.
More Inspection

Cowen and MassRobotics Report on the Increasing Role of Robotics in Achieving Climate Goals
10 Finalists Named in Cowen Startup Challenge; Winner to Be Named at Automate