EasyRobotics says "generational shift" in leadership will guide it as it scales cobot workcells worldwide. 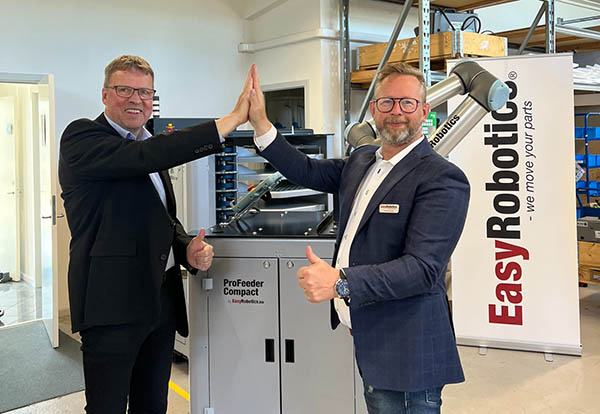 EasyRobotics ApS this week announced that it has installed 1,000 collaborative robot workcells. It also said that Per Lachenmeier, founder and principal shareholder, is handing over the CEO position to Anders Kjempff, formerly chief operating officer of the Sønderborg, Denmark-based company.

“We’re seeing a pronounced need on the global market,” said Kjempff, who became CEO effective May 1. “The industrial sector is looking to automate machine tending but lacks the people to develop, design, and implement the automation solutions.”

“We manufacture complete robot cells that have a delivery time of 14 days and can then be installed and safety approved in just 24 hours,” he added. “When customers receive a delivery from us, it arrives in a large wooden crate and is then up and running and generating value the very next day.”

Lachenmeier, who is a third-generation entrepreneur, founded EasyRobotics in 2014. Kjempff joined the company in 2018 and took responsibility for ensuring that EasyRobotics was readily accessible to customers in the global manufacturing industry via a network of 120 local dealers in 36 countries.

Over the past five years, Lachenmeier and Kjempff have overseen the creation of a robotics company whose own “engine room” is fully digitalized and automated, claimed EasyRobotics. The company said it is ready for a tenfold increase in the sale of robotic cells designed to automate machine tending.

EasyRobotics said it has obtained three patents for its technologies. The company added that it focuses on high-quality materials and thorough testing and that it “invests appreciable sums in protecting its robust systems against competitors and cheap copies.”

“Even though we have delivered around 1,000 installations, we receive a maximum of one service call-out per month,” Lachenmeier explained. “Five years from now, we expect to have sold an additional 18,000 to 20,000 solutions, because it’s our clear ambition to maintain and expand our position as the self-evident, modular and standardised choice in the field of machine tending and palletizing solutions.”

“When a product we have manufactured leaves the factory, we never want to see it again,” he said. “That is why, for example, we always build our cells of robust, high-quality steel rather than aluminium mouldings. It makes all the difference.”

“There’s a spirit of generosity and helpfulness that permeates the entire robot family, where you’re welcomed with open arms, irrespective of whether you’re new to the field or already have a billion in the bank,” said Kjempff. “It’s been something of an eye-opener to experience an environment where there’s such a high level of cooperation across companies, where everyone works to generate synergies and where there is a sense of camaraderie you simply will not find in other sectors.” 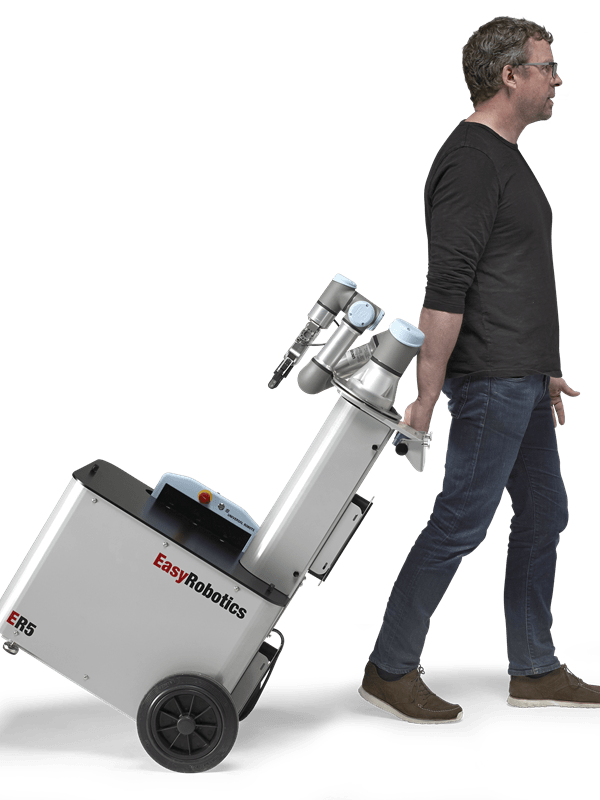 The global market for collaborative robots is growing at 300% annually, according to EasyRobotics. Odense, Denmark-based Universal Robots was a pioneer and is still market leader, but other industrial automation providers and cobot specialists have developed their own models.

In order to ensure 100% utilization of its machine-tending cells, EasyRobotics works with major cobot brands such as Universal Robots, Doosan, Hanwa, Omron, and FANUC.

While the COVID-19 pandemic affected all industries, EasyRobotics reported that its turnover doubled in 2021 and said it expects similar growth this year.

Plans for the future

As most industries worldwide suffer from supply chain bottlenecks and a severe shortage of qualified staffers, more operators are turning to robots to keep costly machinery running 24/7, noted EasyRobotics.

The company said it is currently preparing a large order to send to the U.S.—“an order so big that it has to be shipped in a two-storey, 40-ft. container.” The order includes 70 complete systems for automated machine tending.

EasyRobotic also said it is developing “a previously unseen form of flexible shielding”  for industrial and welding robots.

“Now is the perfect time for Anders Kjempff to take over as CEO and give the business another strong boost,” said Lachenmeier. “EasyRobotics has proved its worth in the market, maturing into a professional business with its head office and development center in Sønderborg, Denmark, which is relatively easy to reach for customers from all parts of Europe via Hamburg or Sønderborg Airport. Fully 95% of our sales are currently to customers outside Denmark, but sales to industrial customers on our domestic market are also picking up.”

Universal Robots Reports $85M in Revenue for Q1 2022
Cobot maker attributes the increase in revenue to the growing awareness of the benefits of automaton.

Universal Robots to Showcase Depalletizing and Item Handling Cobot Demos at MODEX 2022
Universal Robots’ cobots will be on display at several booths at the popular trade show.
More Cobots