Inspired by the giraffe gazelle, the et-Litocran700 can lift plates weighing up to 700 kg and be configured to a particular user's needs. 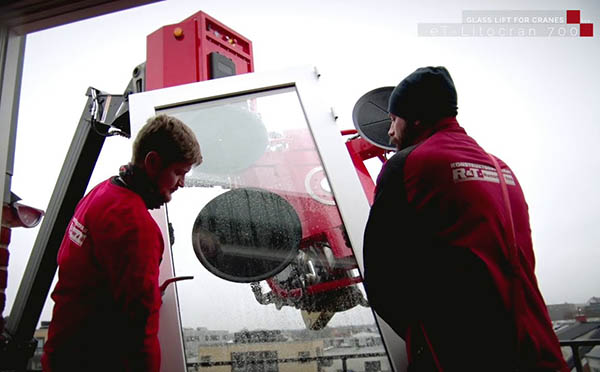 euroTECH
The eT-Litocran700 is designed to make it easier to lift and install windows and facade elements.
By Robotics 24/7 Staff
·

Construction, utility, and infrastructure work at height can be difficult and dangerous and hence a good use case for robotics. This week, euroTECH Vertriebs GmbH announced that it has applied its vacuum technology expertise to facade construction. The Rosenfeld, Germany-based distributor claimed that its new eT-Litocran700 is the fastest device of its kind.

“What do a giraffe gazelle (lat. Litocranius) and an installation attachment for telescopic handlers have in common? The answer to this becomes apparent when observing the ease with which the giraffe gazelle stands and its ultimate precision in gathering the best-tasting leaves from trees,” said euroTECH.

“The eT-Litocran700 offers unprecedented 3D fine-tuned control for fast, low-labor installation of windows as well as glass and facade elements,” the company said.

euroTECH develops and produces customer-specific vacuum systems and components for automated handling tasks. It said users can adjust its modular construction system to meet their requirements. The company added that they can quickly install spare parts for cost savings.

euroTECH's eT-Litocran700 combines a 3D head on a robotic arm with a vacuum lifting device. The stand-alone system can be mounted on a crane or a telescopic handler with a quick-change mechanism.

As standard, the eT-Litocran700 is equipped with an eT-Hover-univac system that can suction glass panes; facade elements; and stone, steel, or concrete plates weighing up to 700 kg (1,543.2 lb.). The 3D head of the eT-Litocran700 enables numerous suction cup positions, said euroTECH.

The lifting device can work in the tightest of spaces in the building area, regardless of the height, the company noted. For users preferring to supply the eT-Litocran700 through the telescopic handler assembly, euroTECH has developed a variant in cooperation with Magni tailored to its lifting vehicles.

The eT-Litocran700 does not require connections to a vehicle for power because it has replaceable 320 Ah Lithium-ion batteries. A separate app provides information on the charge level and operating time of the battery. A standard 230 V power supply is sufficient for recharging, euroTECH said.

The eT-Litocran700 can handle window panes in different positions and angles. It can extend its arm and install panels with millimeter precision. Source: euroTECH

Operators can remotely control both the eT-Litocran700 and the eT-Hover-univac vacuum system. With a range of 100 m (328 ft.), the wireless devices are intuitive to use, said euroTECH. They allow for calm, controlled, and very precise movements of the eT-Litocran700, it claimed.

Telescoping by 400 mm (15.7 in.), the arm can also be pivoted and rotated by 180 degrees. This enables windows to be installed at an angle of 90 degrees to the telescopic handler without having to move it.

At building sites, there isn’t always enough space for optimally placing inbound materials, said euroTECH. The eT-Litocran700 compensates for this with its range of motion. Out of reach until now, glass panes located on an A rack on the side facing away from the construction can be easily retrieved, with no relocation necessary, the company said.

Even complicated overhead maneuvers and obstacles such as balcony rails are no problem for the eT-Litocran700, said euroTECH. Its telescopic arm can accurately place each element down to the last millimeter, it asserted.

In this way, said euroTECH, two installers can easily install an entire facade. The eT-Litocran700 eliminates tedious handling with a risk of breakage, offering maximum flexibility in outdoor applications with minimum personnel requirements, the company said.

The eT-Litocran700 can be rented as an add-on device for a crane or telescopic handler. Source: euroTECH

The comprehensive testing phase of the eT-Litocran700 is now completed. euroTECH boasted that the system's high efficiency makes it a worthwhile purchase.

The company reported strong test sales in Denmark, and its device is also now available in larger quantities in Germany. euroTECH said it is offering an “attractive range” of pricing to machine-rental companies in the DACH (Germany, Austria, and Switzerland) region looking to add the eT-Litocran700 to their machine parks.

For facade designers that want to use the new devices immediately, euroTECH said it carries its own rental stock.

euroTECH
The eT-Litocran700 is designed to make it easier to lift and install windows and facade elements.

Raymond Introduces High Capacity Orderpicker for Intralogistics
The Raymond Corporation said its new order picker can reach up to 456 in. and boost storage capacity to meet e-commerce...