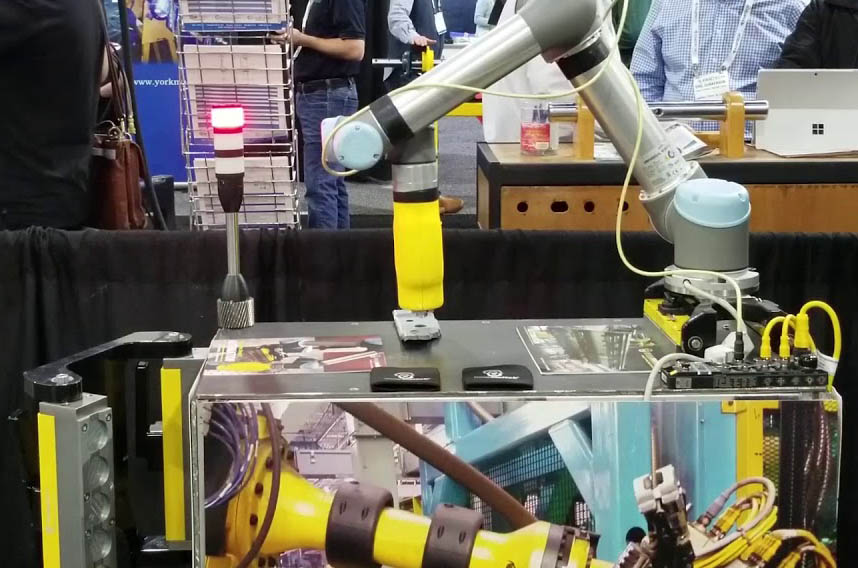 One of the key characteristics of robotic end effectors is the ability to manipulate items of varying materials without damaging them. Festo Corp. today reported “surging interest” in the Electric Series of intelligent magnetic grippers from Magswitch. Festo has been a Magswitch distribution partner for automated gripping since 2019.

“We are just at the beginning of envisioning the range of possibilities for intelligent magnetic gripping,” said Josh Bond, automotive industry segment specialist at Festo.

Festo makes pneumatic and electromechanical systems, components, and controls for process and industrial automation. For more than 40 years, the Mississauga, Ontario-based company said it has provided motion control systems that deliver high performance to improve manufacturing and processing profitability. 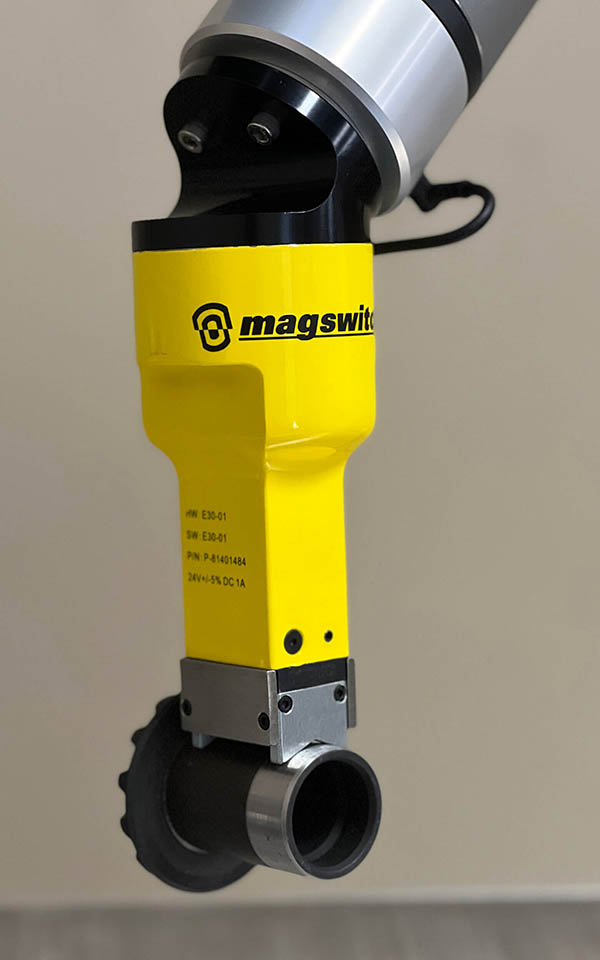 The E-Series gripper on a cobot arm. Source: Festo

The E-Series also has part correct/part incorrect feedback capabilities and two to three times the holding forces of any similarly sized electromagnet or electropermanent magnet, Festo said. Pole shoes that shape the magnetic field are offered in standard and custom configurations to ensure the correct grip for the application.

In addition, the Magswitch grippers are smaller than electromagnets, which reduces the size of end-of-arm tools, said Festo. With less weight and size, designers can use a smaller robot, thus lowering capital cost as well as reducing footprint, it added.

E-Series magnetic grippers are sought after in stamping applications, including progressive dies, claimed Festo. In a stamping operation, intelligent variable field output can separate a single blank from a pile and then identify whether the blank is the correct thickness. These units can identify and grip individual blanks down to .6 mm in thickness, according to the company.

With a rapid on/off actuation time of 250 milliseconds, the E-Series can lower cycle time in comparison with clamps, said Festo.

Bond gave two examples of novel uses of intelligent magnetic gripping. In one application, an E-Series unit can detect the presence of a welded bolt inside an automotive B pillar and sends an alert if the bolt is missing. The solution was low-cost and saved the manufacturer a considerable amount in rework from the early detection of missing bolts, he said.

E-Series units with non-marring polymer offsets are being used for safe, fast, and effective gripping of A-Class surfaces without blemishing those surfaces, said Bond. The magnet uses a small amount of force to gently attach to, not bump, the surface, thus preserving the integrity of the finish.

Once the part is gripped and separated from adjacent parts, the tool automatically switches to full power for maximum performance. With the E-Series proprietary switching reducing magnetism to zero in the off state, ferrous particles fall off the gripper, ensuring a clean surface.

Festo noted that the E-Series units “feature world-class weight-to-force ratios and deliver breakaway forces from ounces to tons.” They operate on 24 volts DC with serial communication protocols and include options for control via any Ethernet protocol.

Learn OnRobot Platform Guides Users for Collaborative Applications
Learn OnRobot is a free online learning platform that can guide users of all skill levels through the design and...

How to Pick a Collaborative Robot
The Southwest Research Institute explains factors to consider when selecting a cobot.
More Grippers