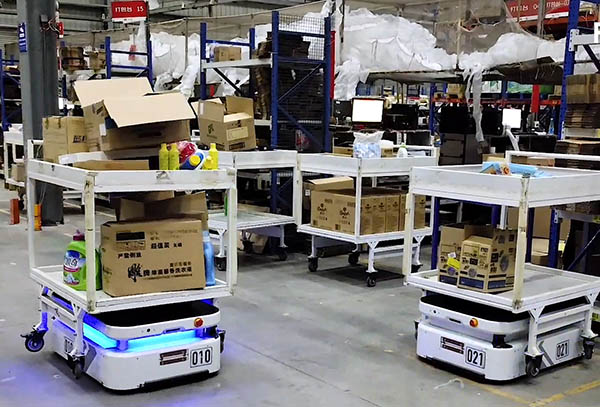 Shoppers in China spent $132.6 billion with Alibaba and JD.com on Singles' Day, Nov. 11, according to ForwardX Robotics. In comparision, U.S. consumers spent a total of $19.6 billion across retailers on Black Friday and Cyber Monday in 2021, according to an Adobe report.

Founded in 2016, ForwardX claimed that it is “Asia's largest person-to-goods AMR” provider. The Beijing-based company has more than 250 computer vision scientists and robotics experts and offices in the U.S., Japan, and China. It recently launched its offerings in the U.S. market.

ForwardX said its AMRs are widely used for order picking in warehouses, in-store order picking, and material handling in factories. Its more than 100 customers include JD.com, DHL, IKEA, and TC.

“11.11,” also known as Singles’ Day, has gained traction with Chinese consumers, as hundreds of brands such as Apple, Nike, Walmart, Samsung, Lowe’s, Michael Kors, and Urban Outfitters offer promotional deals for the holiday.

This year, ForwardX and JD.com collaborated in multiple warehouses to meet the intense picking workloads that come with the sudden spike in demand. AMRs assisted with picking heavy cases, home appliances, and mixed small and midsized goods.

Known for its same- and next-day delivery, JD.com needed to ensure that use experiences were positive and that everything went out in a timely manner. ForwardX said its robots aided workflows in the following environments:

During the 11.11 promotion period, one of JD.com’s home appliance warehouses worked with ForwardX Max AMRs to reduce employee fatigue, aisle congestion, and operational costs. They also increased efficiency and made sure orders could go out on time, said the company.

Picking efficiency increased by 108%, and 100% of the orders were delivered on time, ForwardX said.

This JD.com warehouse primarily ships by the case for both business-to-business (B2B) store replenishment and business-to-consumer (B2C) e-commerce order fulfillment. As with home appliances, manual case-picking workflows are labor-intensive and slow.

JD.com already had ForwardX Max AMRs in its warehouse for these reasons. Prior to 11.11, it needed to temporarily increase the number of AMRs on the floor to prepare for the big promotion. The vendor, which offers robotics as a service (RaaS), completed deployment within one week.

During the promotion period, the warehouse's capacity increased by 400%, and employee performance increased by 133%. While the total shipments increased sixfold, labor intensity for employees reduced by 33%, according to ForwardX.

Singles’ Day was also a big test for JD.com’s cosmetics warehouse because of the variety of goods and mix in size. Errors become more frequent as it attempted to meet e-commerce holiday demand. Therefore, the warehouse needed a flexible system that would not only increase productivity, but also increase accuracy.

This warehouse used ForwardX Flex 300-L AMRs that autonomously docked to racks for picking and sorting workflows. By reducing the empty long walks for employees, the robots helped reduce the labor intensity and allowed employees to pick and sort orders on the spot, said the companies.

During the promotion period, efficiency increased by 45%, and picking error rates decreased by 90%, resulting in a 99.99% accuracy for deliveries, they said.

ForwardX said it has become “JD.com’s most reliable automation partner” as it addresses e-commerce trends and continues to grow on a global scale. The two companies have deployed projects in over 20 warehouses, with more on the horizon.

Plus One Robotics to Demonstrate Parcel Handling System at ProMat 2023
Visitors in Chicago can race against the robot in VR experience.

JD Logistics
JD Logistics has same- and next-day delivery available for almost any product to almost anywhere in China. They are at the forefront of robotics and automation and have commercial deliveries by drone.