Omniverse, now in beta testing, is designed to provide real-world physics for a variety of 3D virtual worlds. 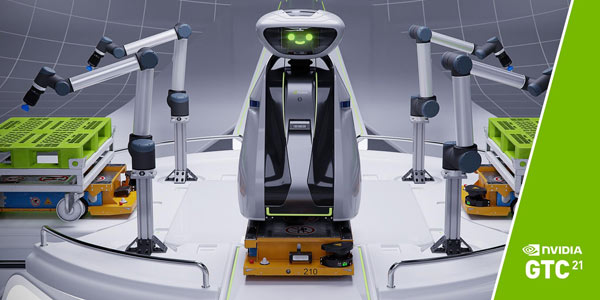 NVIDIA
Omniverse was one of the major announcements at NVIDIA GTC 2021.
By Eugene Demaitre
·

“Omniverse was made to create shared virtual 3D worlds,” stated Jensen Huang, founder and CEO of NVIDIA, during his keynote address. “Ones not unlike the science fiction metaverse described by Neal Stephenson in his early 1990s novel Snow Crash.”

“Omniverse is the underlying foundation for all our simulators, including the Isaac platform, and we've added quite a few features,” said Murali Gopalakrishna, general manager for robotics at NVIDIA. “We built the Isaac simulation engine to not only create better photorealistic environments, but also to provide for synthetic data generation and domain randomization to train robots using reinforcement learning in warehouses and factories of the future.”

Omniverse to simulate the factory of the future

Huang demonstrated with Milan Nedeljković, member of the BMW AG's management board, how a photorealistic digital twin of a manufacturing facility can help plan for a “factory of the future.”

“These new innovations will reduce the planning times, improve flexibility and precision, and at the end produce 30% more efficient planning,” said Nedeljković.

Omniverse Enterprise includes the Omniverse Nucleus server, which manages the shared database, and Omniverse Connectors, which are plug-ins to design applications. It also includes Omniverse Create for accelerating scene composition and enabling users to assemble, light, and render scenes, and Omniverse View, which provides for collaborative design and visualization through photorealistic rendering.

“We believe very strongly that robotics has been moving slowly because of an inability to simulate the real world for fast prototyping,” Gopalakrishna told Robotics 24/7. “It's important to take a platform approach that encompasses hardware, compute capabilities, sensor fusion, and software. We're now letting developers take advantage of our full compute stack.”

Partners such as architecture firm Foster and Partners, entertainment firm Industrial Light & Magic (ILM), and video game company Activision have been testing the open beta version of Omniverse. Enterprise licenses of Omniverse will be available this summer, said NVIDIA.

NVIDIA's offerings for robotics include new processors and simulation. The company announced three Arm processors and robotics and AI applications based on its Jetson offerings. NVIDIA announced its intention to acquire microprocessor maker Arm Holdings for $40 billion in September 2020.

“The core of Omniverse, with all the simulation goodness in Isaac, will be available in May,” Gopalakrishna said. “We're providing developers open access to the beta. We hope to release the general version by the end of the year—there's significant diversity among robots, including UGVs [unmanned ground vehicles], AMRs [autonomous mobile robots], and manufacturing arms.”

“The typical warehouse or hospital has a significant amount of dynamism. A robot can be trained in the physical world, but depending on the time of day, lighting, and how many boxes are empty or stacked, its perception can change significantly,” said Gopalakrishna. “Using Isaac Sim with synthetic data generation and domain randomization, users can train robots in a more efficient way. We also supports the open-source community including ROS and ROS 2—we want the robotics world to grow faster and provide more meaningful applications outside of safety cages.”

“We really pushed the envelope—our system can train on over a billion types of garbage and recyclables and run on the network in real time,” said Jason Calaiaro, co-founder and head of engineering at AMP Robotics. “The end-to-end workflow from NVIDIA can train the neural network. We're using TensorRT and increased performance tenfold. Think of different configurations of cans—some can be crushed or in different positions. We can now recycle 90% of that garbage.”

Erik Nieves, CEO of Plus One Robotics in San Antonio, Texas, provided case studies of AI-powered mobile robots that can use computer vision to work with humans in real-world warehouses. The throughput goals, product packaging, and level of human support all affect automation decisions, he said.

Huang said that NVIDIA DRIVE Orin, a computing system on a chip (SoC) expected to go into production next year, will be the central brain of autonomous vehicles. Volvo Cars said it will use NVIDIA DRIVE Orin in its next-generation XC90 vehicles.

NVIDIA claimed that DRIVE Atlan will be a “data center on wheels” and be able to perform more than 1,000 trillion operations per second (TOPS). “Atlan will be a technical marvel – fusing all of NVIDIA’s technologies in AI, auto, robotics, safety, and BlueField secure data centers,” Huang said.

Just as Omniverse can build a digital twin of car factories, DRIVE Sim can be used to create a digital twin for autonomous vehicle development. Huang said DRIVE Sim will be available to the community this summer.

The NVIDIA GTC 2021 sessions are available on demand to registrants interested in viewing recordings of the technical presentations, said Gopalakrishna.

NVIDIA
Omniverse was one of the major announcements at NVIDIA GTC 2021.