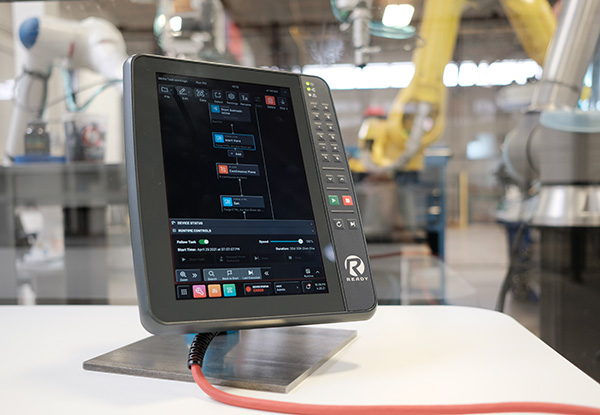 Software for ease of use has become a differentiator for robots in manufacturing. READY Robotics Corp. today announced the launch of Forge/OS 5, which it described as “the first open, cross-brand operating system for industrial automation.” The Columbus, Ohio-based company said that its offering will enable machine builders and software developers to create applications that scale across robot and automation brands.

Founded in 2016, READY Robotics claimed that Forge/OS is the “first enterprise-grade operating system” for controlling hundreds of models of industrial and collaborative robot arms, as well as the peripherals needed to make those robots productive in the real world. The company also said it makes automation easier to deploy through its READY Market marketplace and READY Academy online learning platform.

READY Robotics said it has incorporated years of feedback from manufacturers ranging from Fortune 500 businesses to small machine shops. Forge/OS 5 is designed to enable companies to manage their own automation without needing deep expertise in robot programming, it added.

Forge/OS 5 has been built to facilitate third-party development, said READY Robotics. Software developers can focus on use cases that scale across top robotic brands and benefit from its intuitive core services, it asserted.

“Forge/OS is built on Linux, C++, and Qt 5.15,” said Josh Seabloom, vice president of engineering at READY. “Forge/OS at its heart is a device-centric operating system. ... We have made it possible for third parties to build custom device drivers in Forge.”

The operating system can reduce the complexity for those with multiple brands of robots and peripherals on their production floor, according to READY Robotics. Forge/OS 5 abstracts brand-specific robot programming languages, and operators can use Task Canvas, READY's no-code programming app with preloaded applications, to program industrial robots and cobots.

During an online demonstration, Gibbs showed how Forge/OS 5 can control products from different vendors through one interface, without post-processors and bypassing robot controllers. He added that it will soon be able to control Nachi robots and additional form factors such as a SCARA robot arm.

Not only does Forge/OS 5 support robot arms, said READY Robotics, but it also supports peripherals such as cameras, grippers, and end-of-arm and process-specific tooling through a wide variety of fieldbus standards and custom communication protocols. OEMs can easily integrate their hardware with any robot powered by Forge/OS 5, added READY Robotics.

“This is how we go from hundreds of thousands of robots sold to millions,” Gibbs said. “We're so excited to see what applications you'll build with Forge/OS 5.” He ended the demo by showing three different robots working together in a single process, all controlled by Forge/OS.

With a rapidly growing ecosystem of more than 50 partners, composed of leading companies in industrial automation, Forge/OS 5 significantly simplifies the integration of hardware into automated workcells.

Kel Guerin, co-founder and CIO, showed how the Unity game engine works in READY ForgeSim to simulate and program different robots and processes, such as pick-and-place and machine tending operations. This can also help with planning and training, he said.

“By unlocking access to robot programming and enabling out-of-the-box control of robotics and hardware, Forge/OS 5 enables hardware OEMs like Schunk to accelerate product development and adoption, and enhance robotic applications far beyond what was possible yesterday,” said Milton Guerry, president of Schunk USA. “Forge/OS 5 represents opportunity ... for manufacturers to adopt robotics with ease ... and opportunity for robot brands to accelerate product adoption.”

Guerry noted that “the results can be as ambitious as the implementer.”

While robot sales have increased, the numbers are small in comparison with consumer electronics or automotive sales, noted Juan Aparicio, vice president of product at READY. Forge/OS 5 could unleash automation for OEMs, integrators, and manufacturers to solve important problems, he added.

“Until now, there hasn’t been a good channel for developers to build the apps that have the power to ignite the explosive spread of automation,” Aparicio said. “We are incredibly excited to enable the brightest builders in the world, regardless of background, to dream up and create products that will impact automation the way they have impacted other industries. Creating a true developer ecosystem for automation has the potential to usher in a new golden age of automation.”