TuSimple works with NVIDIA on a high-performance processor to accelerate the growth of its autonomous truck network. 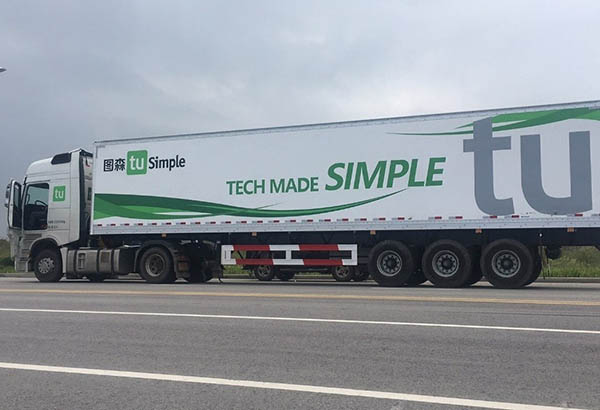 NVIDIA
TuSimple says its autonomous domain controller, developed with NVIDIA, to help it scale for the self-driving trucking market.
By Robotics 24/7 Staff
·

As part of their efforts to stay in front of the autonomous vehicle and artificial intelligence races, respectively, TuSimple Holdings Inc. and NVIDIA Corp. have expanded their partnership. TuSimple today said it has worked with NVIDIA to design and develop an advanced autonomous domain controller for its autonomous trucking systems.

The autonomous domain controller (ADC) will incorporate the NVIDIA DRIVE Orin system on a chip (SoC), which is designed for AI-based self-driving applications. TuSimple said the collaboration will provide computing for its autonomous driving system (ADS) and help it add autonomous trucks to its Autonomous Freight Network (AFN).

“A high-performance, production-ready ADC is a critical piece to scaling our AFN, and we are taking a hands-on role to advance its development with the help of NVIDIA,” said Cheng Lu, president and CEO of TuSimple. “We believe this move provides us a significant competitive advantage in speeding time to market and further extending our industry leadership position.”

San Diego-based TuSimple is developing SAE Level 4 autonomy systems for long-haul, heavy-duty trucks. Founded in 2015, the company claimed that it launched the “world's first” AFN in 2020. It currently operates more than 50 autonomous trucks between Arizona and Florida.

Last year, TuSimple announced plans for a $1.1 billion initial public offering, and it recently drove a Class 8 semi-truck fully autonomously on more than 80 miles of a public road between Tucson and Phoenix.

The NVIDIA DRIVE Orin SoC delivers 254 TOPS (trillion operations per second) of performance, and the companies said it is “the central computer for intelligent vehicles—powering safe autonomous driving capabilities.”

“We have been strong advocates of TuSimple from the start, first as an NVIDIA Inception member back in 2017, and now as they continue to blaze trails in the autonomous trucking industry,” said Gary Hicok, senior vice president of engineering at NVIDIA. “TuSimple is moving from development using NVIDIA GPUs to production based on DRIVE Orin.

TuSimple steps on the gas for autonomous trucks

TuSimple said its ADC is the central compute unit of an autonomous semi-truck, processing hundreds of TOPS, including mission-critical perception, planning, and actuation functions. The startup said it plans to expedite the development of an automotive-grade and scalable ADC that will be integrated into future autonomous truck production.

“This strategic vertical integration will give TuSimple more control over the ADC's capabilities and accelerate its development timeline,” it said.

TuSimple will own usage rights to the ADC reference design, including certain limited “first-use” provisions. The company said it plans to work with third-party manufacturers for the production of the ADC.

NVIDIA
TuSimple says its autonomous domain controller, developed with NVIDIA, to help it scale for the self-driving trucking market.