RE2 to combine dexterous robot arms, autonomy software, and mobile base to refuel Apache helicopters. 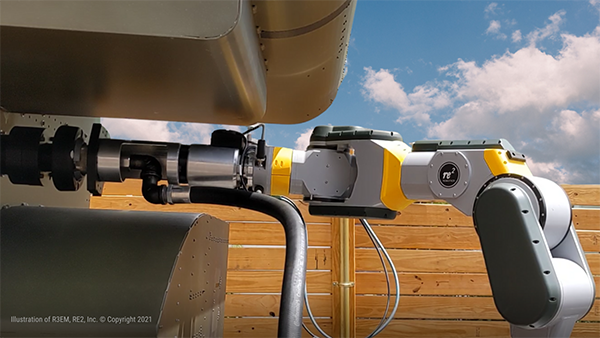 RE2 Robotics
RE2 is developing a robotic refueling system for Apache helicopters.
By Robotics 24/7 Staff
·

RE2 Robotics Inc. yesterday said it has received $1 million in funding from the U.S. Army Combat Capabilities Development Command Aviation & Missile Center (AvMC). Pittsburgh-based RE2 builds mobile manipulation systems for human-in-the-loop or fully autonomous tasks. In the Remote Robotic Refueling for Extended Missions (R3EM) project, the company will develop a system that can autonomously refuel AH-65 Apache helicopters in the field.

“The R3EM program enables RE2 to apply its next-generation autonomy software and history of robotic arm expertise to a new outdoor application within the Department of Defense,” said Jorgen Pedersen, president and CEO of RE2 Robotics. “The technology being developed as a result of this aircraft servicing program strategically aligns with our ongoing expansion into the commercial aviation market.”

RE2 Robotics said its systems consist of robotic arms, intuitive controllers, and advanced autonomy software to empower humans to do their jobs safely and efficiently. The company's RE2 Sapien mobile manipulation systems can operate in a variety of complex indoor and outdoor environments for use in the aviation, construction, defense, energy, and medical industries.

RE2 robot arm to engage helicopters

The R3EM project is in support of the Autonomous and Robotic Remote Refueling Point (AR3P) program, which the Naval Facilities Engineering and Expeditionary Warfare Center in Port Hueneme, Calif., is managing.

R3EM will use RE2’s proprietary perception software to control a highly dexterous RE2 robotic arm mounted onto an unmanned ground vehicle (UGV), which will autonomously position and engage a fuel nozzle in the helicopter’s fuel port.

Multiple sensors will provide 3D situational awareness, allowing the system to operate in an unstructured, outdoor environment, said RE2. The system will automatically detect when fueling is complete and disconnect the fuel nozzle from the aircraft.

RE2 is partnering with Pratt Miller, which is supplying its TMT-I rugged mobile base for the program.

“Upon a pilot’s command, this system will quickly and efficiently remove a fuel line from a stored location, engage the fuel line with the Apache helicopter, and then move it back into a stowed position, completely autonomously,” said Dr. Amanda Sgroi, director of computer vision and autonomy at RE2 Robotics. “Because the system is unmanned, it will enable troops to extend the range of their missions while eliminating the need for soldiers to remain isolated at refueling stations, further reducing the size of a mission’s logistical footprint.”

RE2 Robotics
RE2 is developing a robotic refueling system for Apache helicopters.

Team NimbRo Wins ANA Avatar XPRIZE, Demonstrating Effective Robot Telepresence
The University of Bonn team conducted its final round of tasks in just under six minutes, half the time of...
More Mobile Manipulation

RE2 Marks Technical Achievement With STARFISH Gripper for the U.S. Navy
RE2 Robotics Continues to Grow After Sarcos Acquisition
Sarcos Closes Acquisition of RE2, Establishes Pittsburgh Presence
Sarcos and RE2 CEOs Talk Next Steps After Acquisition Announcement
Sarcos Technology and Robotics Corporation to Acquire RE2 for $100M