Waymo to build a trucking hub in Dallas and is working on autonomous freight hauling across North America. 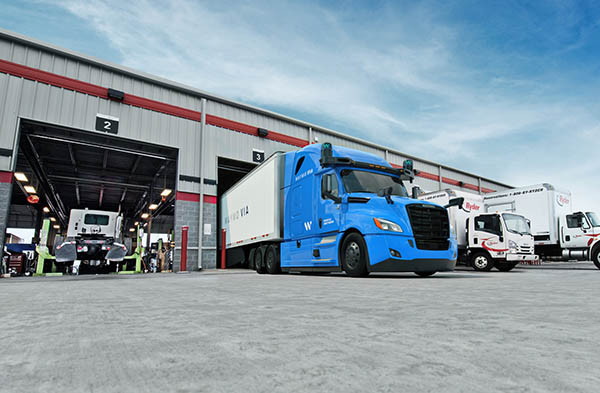 Waymo
Waymo will use Ryder's nationwide maintenance network for its autonomous trucks.
By Robotics 24/7 Staff
·

As with self-driving cars, autonomous trucks will need a support infrastructure before they can be widely used. Ryder System Inc. and Waymo Via, the trucking and local delivery unit of autonomous driving developer Waymo, today said they are collaborating to provide maintenance for Class 8 autonomous trucks. They companies said they expect to maximize vehicle uptime and ensure the reliability required to scale operations nationwide.

“As we continue to scale our autonomous trucking operations, we couldn’t have found a better partner than Ryder,” stated Charlie Jatt, head of commercialization for Waymo Via trucking. “There are many synergies between our Waymo Via vision and operations and Ryder’s expertise and resources, and we look forward to unlocking best-in-class solutions within the industry and bringing autonomously driven trucks to market throughout the U.S.”

Since starting out as the Google Self-Driving Car Project in 2009, Waymo said it has focused on building, deploying, and commercializing its Waymo driver system to improve access to mobility while improving traffic safety.

Waymo noted that it has been continuing testing for its fifth-generation Waymo Driver on Class 8 trucks (with a gross vehicle weight rating of more than 33,000 lb. or 14,969 kg.), hauling freight, and working with Daimler Trucks to develop SAE Level 4 redundant systems. It is also building a long-term trucking hub in Dallas and is hiring.

Waymo Via to use Ryder maintenance network

With a growing fleet and geographical footprint, Waymo Via said it needs a robust and scalable solution for truck maintenance. Ryder has a network of more than 500 maintenance facilities in the U.S. and nearly 90 years of fleet maintenance expertise.

The companies said they will partner on servicing and evolving maintenance practices for autonomously driven trucks across Waymo Via sites in Texas, Arizona, California, Michigan, and Ohio, as well as roadside service between hubs.

“While this partnership initially focuses on fleet maintenance, we see many opportunities to collaborate on autonomous trucking operations in order to successfully deploy these trucks at scale,” said Karen Jones, chief marketing officer and head of new product development at Ryder.

“Already, we’ve collaborated on the layout and design of Waymo’s new Dallas facility to ensure it’s optimized for serviceability of trucks and for the transfer hub model they plan to pursue in the near future,” she said.

“Autonomous Class 8 technology is quickly taking hold, and Ryder is poised to become a leader – not only in servicing trucks, but also in managing the unique logistics of autonomous operations,” said Jones.

Waymo
Waymo will use Ryder's nationwide maintenance network for its autonomous trucks.