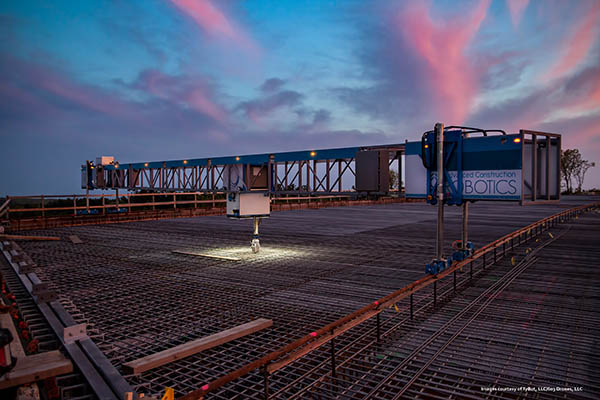 PITTSBURGH—Stephen Muck, chairman and CEO of Brayman Construction Corp., knew he had a problem on his hands as he continued having trouble finding enough people to work.

In 2016, he joined forces with roboticist Jeremy Searock to see if he could help solve the problem through automation.

While Advanced Construction Robotics is starting with just a few aspects of the construction process, Searock told Robotics 24/7 he believes the whole industry is ripe for technological disruption.

“Construction has typically been an un-innovated industry,” said Searock. “High-tech has not really been in construction. That means there’s a great opportunity for even simple robots to make a big impact.”

Labor shortages and inconsistent worker productivity are also particular pain points in the space, he said.

“There is a large labor shortage in every industry, but for construction, it’s been a problem for 15 years,” Searock noted.

When compared with the manufacturing and retail industries, Searock said the construction industry “productivity rate is one of the lowest and is one of the only that is declining.” Worker safety is also a concern, he said (see “Quadcast” video below).

In February, Associated Builders and Contractors released a statement noting that the construction industry will need “to attract nearly 650,000 additional workers on top of the normal pace of hiring in 2022.”

“The workforce shortage is the most acute challenge facing the construction industry despite sluggish spending growth,” said ABC Chief Economist Anirban Basu. “After accounting for inflation, construction spending has likely fallen over the past 12 months. As outlays from the infrastructure bill increase, construction spending will expand, exacerbating the chasm between supply and demand for labor.

“An added concern is the decline in the number of construction workers ages 25 to 54, which fell 8% over the past decade,” added Basu. “Meanwhile, the share of older workers exiting the workforce soared.”

On the other end, the global commercial building automation market is estimated to rise at a 8.3% compound annual growth rate between 2021 to 2031, according to Transparency Market Research.

TyBOT can perform more than 1,100 rebar ties in an hour

While the average construction worker is estimated to be able to do about 250 to 300 rebar ties an hour, TyBOT can autonomously tie more than 1,100, according to Danielle Proctor, CEO of Advanced Construction Robotics (ACR).

The self-navigating autonomous robot is outfitted with gantry legs and bogies, a gantry system, a power generator, and a transmitter “belly box,” which allows it to communicate with its operator. A TRAM holds the core components and transports the tie module.

Thanks to its dual-camera system and computer vision technology, TyBOT can self-identify rebar intersections. It moves along a track system and can accurately position itself to tie rebar without any pre-programing required.

Searock said the company chose to tackle the specific task of tying rebar first because it checked all the boxes of how robots can be integrated into a construction zone.

“Any task you want to automate needs to be repetitive,” he said. “It needs to fill a lot of man-hours to be worth it, from a business perspective.”

Searock said tying rebar is a difficult task for workers.

“At the end of the day, after a career, it can be very damaging to their bodies after doing it for 20 years,” he said.

Searock said TyBOT has been used for 35 construction projects, including in Cranberry Township, Pa., and the CSVT Bridge (see videos below). TyBOT recently completed its first job in Texas as part of the construction project for the SH302 highway project in Winkler County, Texas.

Every TyBOT deployed comes with a robot supervisor

Proctor said every one of ACR's robots in use is accompanied by a robot supervisor, but the goal is to teach end users to use the systems on their own.

He said a typical installation takes about one to four hours. On-the-job training for basic operations takes to three to five days. Advanced training takes seven to 10 days.

The company is also developing a rebar carrying and placing robot called IronBOT, which it plans to start testing out with companies later this year. The company said IronBOT will be capable of self-packing loads of up to 5,000 lb.

Proctor said she sees the two products as partners. Once IronBOT has finished moving the rebar, TyBOT can come in to tie them up.

“What IronBOT and TyBOT will be able to achieve together is a continuous carry, lift, place, and tie operation,” said Proctor.