Ally Robotics says Miso Robotics plans to purchase its affordable, no-code arms to use in its Flippy frying robot. 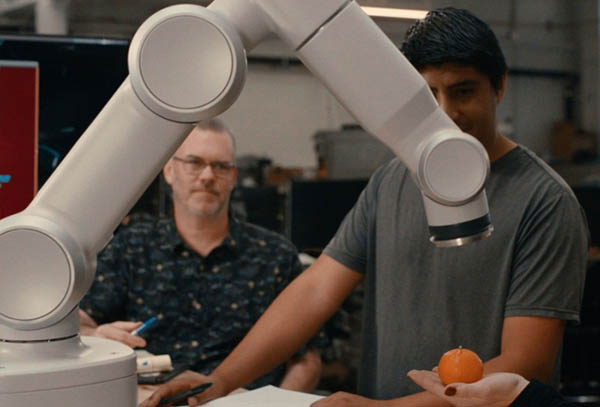 As robots move into kitchens and restaurants, they need form factors that are affordable, hygienic, and durable. Ally Robotics Inc. this week launched a crowdfunding campaign to raise up to $8.5 million in seed capital. Miso Robotics Inc. has signed a statement of intent to become Ally's first partner and purchase its robotic arms for its Flippy 2 product line, representing potential revenue of $30 million.

“Ally isn’t content with simply developing and testing our technology in a lab,” stated Mitch Tolson, founder and CEO of Ally Robotics. “We want to get our robotic arms in the hands of real companies that are creating change for their customers.”

“That is exactly why we’ve partnered with Miso to integrate Ally arms into Flippy,” he added. “We see a future where Ally supplies retail-level robotic solutions that are affordable to all and empower every person and robot to do more, together.”

El Segundo, Calif.-based Ally Robotics was founded by artificial intelligence and robotics innovators and said its goal is to “solve real human workflow problems through simple tech.” The startup said it is working on functional and sustainable technology to help “usher in the democratization of automation.”

Ally Robotics said it is developing “unique” robot arms and no-code software, as well as sensing controls. How are they different from existing industrial robot arms or collaborative robots?

“Ally’s robotic arms were designed from Day 1 with manufacturability and affordability in mind,” he said. “We’ve developed lower-cost, reliable hardware, including novel robotic joints able to double torque with minimal velocity loss and quasi-direct-drive actuators that are 30% the cost of traditional models.”

“You can also focus on what matters most for the application and simplify the design,” said Tolson. “Our design and component selection starts with designing for high reliability, supply chain availability, and ease of manufacturing.”

“Additionally, Ally’s technology will be programmed with a 'no-code' language, using imitation learning instead of using resources for heavy development,” explained Tolson. “Combined with its single-hand end effector, the robotic arms can accommodate the majority of human workflow automation and ultimately be deployed across industries.”

The company is initially developing its robots for the restaurant and hospitality industries, with eventual expansion to sectors including agriculture, construction, and manufacturing.

“There are a number of ways to interact with Ally,” Tolson noted. “While we provide full ROS [Robot Operating System] and programmatic interfaces, we also have low-code and no-code interfaces.”

“For our no-code interface, we’re developing what we call Ally Apprentice, in which Ally can be taught to perform a task through demonstration,” he said. “In the back end, Ally Apprentice uses a collection of different AI technologies such as Neural Descriptor Fields to understand objects, machine vision with skeletal pose tracking, and simulation with deep reinforcement learning to train a set of skills and tasks. Those skills can also be applied to new tasks people want Ally to perform.” 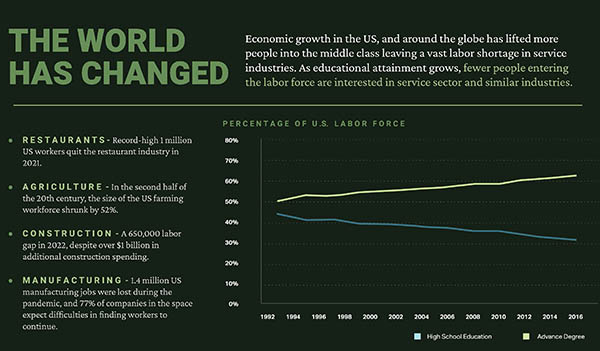 Up to 58% of Americans have either eaten food prepared by a robot or would be willing to do so, found an Xcelerant survey conducted on behalf of Nala Robotics. At the same time, restaurants have thin profit margins and are struggling with staffing.

“While robotics and automation have helped alleviate the well-documented labor shortage, the majority of robots in the world are too expensive and are only deployed for the most difficult tasks that require heavy lifting or minute precision,” said Ally Robotics. “It is nearly impossible for companies struggling in low-margin industries to integrate robotics into their operations – especially for use cases that require robots to work side by side with human beings.”

Since many restaurants, fast-casual chains, and fast-food franchises are considering adding automation, keeping the price down will be essential to scaling up, acknowledged Tolson.

“Ally Robotics’ robotic arms are built with novel, lower-cost robotic joints and actuators to keep the prices low and are designed to manufacture at scale using these materials from prototype to production,” he said. “You can help control costs by mitigating risk within your supply chain and developing partnerships incentivized to deliver the end-customer outcome and value.” 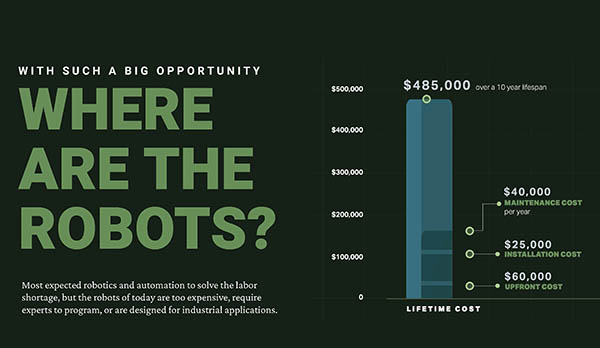 Vision and controls needed for safety

With several target markets, Ally Robotics is mindful of the need for safe workcells, said Tolson.

“First, we need to ensure that the work instructions provided to the robot are correct—security needs to be included in the design from the start,” he said. “The other key aspect is giving the robot a set of eyes, using machine vision and neural descriptor fields to understand the context of the changing environment and simulate scenarios beyond the real-time event to avoid any unwanted occurrences.”

“To further reduce the need on high-cost components, instead of relying on position control, Ally uses torque and impedance-based control to understand when collisions occur and to adjust for dynamic loads on the robot in real time,” Tolson said.

He added that Ally's no-code software and streamlined design should enable it to be used in real-world applications, including in the food-service industry.

More milestones ahead for Ally

The combined market for collaborative and service robotics is projected to be $114 billion by 2027, said Ally Robotics. The company said its smart software and hardware will reduce the cost of the robotic arms used in Miso Robotics' Flippy frying robots by 30%.

By late summer, Ally Robotics plans to be performing cooking operations with Flippy 2. By autumn, Ally should be capable of “shadowing” a person to learn a new task and then perform it, said Tolson.

By the end of this year, the company is working to enable its system to string together a series of tasks to perform a workflow, he said. It also expects to have fleet and service managment systems to support Ally. Tolson said Ally Robotics will then ramp up manufacturing in 2023.

Comau Introduces N-220 Industrial Robot With Streamlined Design for Ease of Use
Comau says its N-220-2.7 robot arm is is designed for cost-effective automation and easy maintenance.

Sarcos Technology and Robotics Corporation to Acquire RE2 for $100M
Sarcos said the purchase will help it expand its presence in the medical, subsea, construction, and aviation industries.