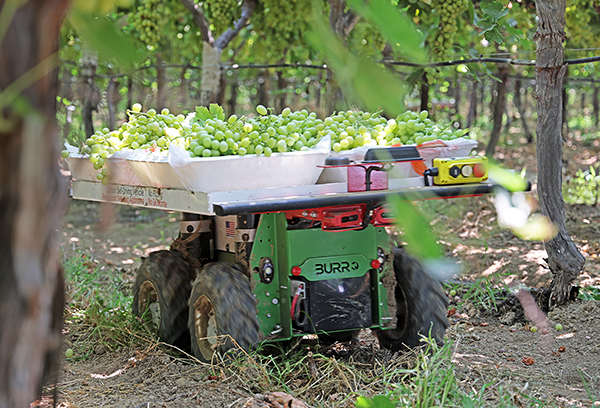 Burro, which has been developing a collaborative robot platform for the agriculture industry, yesterday said it has raised $10.9 million in Series A funding. The company, formerly known as Augean Robotics Inc., said it plans to “dramatically increase” the size of its staff, expand to more than 500 robots next year, and add capabilities to its product.

“Many autonomy companies beginning in agriculture have focused first on autonomous tractors, autonomous weeding, and harvesting, where they try to comprehensively automate incredibly hard technical tasks, and often struggle to scale into a large market,” stated Charlie Andersen, CEO of Burro. “We’ve started instead with collaborative people-scale robots that help people by moving heavy things around.”

“The beauty of this approach is that we can scale today around a ubiquitous pain point in the most labor-intensive areas of agriculture, while also allowing our platform to capture data and learn about many environments—providing the foundation for us to scale to countless other applications,” he added.

Founded in 2017, Burro said its autonomous platform is designed to free growers and their workforce from tedious tasks, while building a modular base for greater autonomy. The Philadelphia-based company claimed that it offers “the only fully autonomous, plug-and-play collaborative farming robot on the market.”

Growers of specialty crops such as table grapes, berries, and nursery products are largely un-mechanized and employ 88% of U.S. crop workers to do a diverse set of hard-to-mechanize tasks, according to Burro.

In California, where the bulk of specialty crops in the U.S. are grown, the number of farmworkers has declined 40% the past decade because of the strenuous nature of farm labor, increasing regulations, and rising wages.

Burro said its robots can increase productivity in conventional production environments. Burros feature a patent-pending approach called Pop Up Autonomy, which means they work immediately out of the box by enabling everyone in a working environment to become an operator.

The mobile robots do not require a centralized control or installation of burdensome infrastructure, said the company. Instead, they use computer vision and artificial intelligence to “learn on the fly” and to navigate autonomously while carrying various payloads, it said. 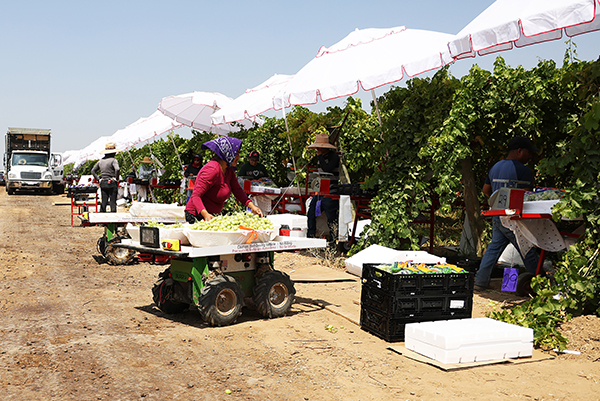 Burro's robots are designed for ease of use. Source: Burro

Burro built to scale up

Today, Burro said it has 90 robots in table-grape fields covering 100 to 300 miles a day autonomously, six days a week. Instead of each farmworker walking several miles a day with a 250 pound wheelbarrow full of grapes in the heat, he or she can stand in the shade and pick andpack with a continuous flow of fruit out of the field.

The company said its robots are already increasing productivity, with one Burro enabling six-plus people to harvest up to 48% more fruit per day for a less than a two-month return on investment (ROI).

Burro said it is already scaling in the $3 billion table-grapes market, and it is looking to expand into berries and nursery crops. It said it eventually aims to tackle the $1.2 trillion in U.S. outdoor labor with its modular automation.

“Today's product is the first step in a fully autonomous farm stack: Robots that can navigate anywhere, perceive everything, and use dexterity to do increasingly complex work outdoors,” the company said.

S2G Ventures and Toyota Ventures led Burro's Series A round. It is Toyota Ventures' first investment in agricultural robotics. F-Prime Capital and the Cibus Enterprise Fund joined the round along with existing investors including Radicle Growth and ffVC.

“Charlie and the Burro team have big plans to drive their product roadmap from a growing customer base, harden their technology through real-world use, and offer extended platform services that farmers need every day,” said Jim Adler, founding managing director at Toyota Ventures. “Burro is already gaining traction in the big, broken but increasingly accessible agricultural market.”

“Burro’s product is in high demand because the team is hyper-focused on understanding and solving real agriculture use cases in a way that is simple and accessible,” said Sanjeev Krishnan, managing director and chief investment officer at S2G Ventures. “We are thrilled to back Charlie and the team at Burro as they work side-by-side with growers to improve the social, environmental, and economic outcomes of farm operations.”

As part of the round, Krishnan will join Burro's board of directors.

Solinftec to Release Solix Sprayer Robot for Precise Pesticide Application
Solinftec's Solix Sprayer joins its Solix Scout robot, which is already in use on farms in North America and Brazil.
More Agriculture