The team said it has developed a system that allows for a legged robot to understand its environment without the need for the mapping and planning phase. 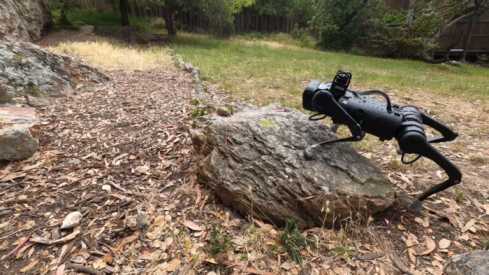 Researchers at Carnegie Mellon University’s School of Computer Science and the University of California, Berkeley, have designed a robotic system that enables a low-cost and relatively small legged robot to climb and descend numerous obstacles.

The robot can travel up and down stairs nearly its own height. It can also traverse rocky, slippery, uneven, steep and varied terrain. In addition, the robot can walk across gaps, scale rocks and curbs, and even operate in the dark.

“Empowering small robots to climb stairs and handle a variety of environments is crucial to developing robots that will be useful in people’s homes as well as search-and-rescue operations,” said Deepak Pathak, an assistant professor in UC Berkeley's Robotics Institute. “This system creates a robust and adaptable robot that could perform many everyday tasks.”

The team put the robot through its paces, testing it on uneven stairs and hillsides at public parks, challenging it to walk across stepping stones and over slippery surfaces, and asking it to climb stairs that for its height would be akin to a human leaping over a hurdle.

The robot adapts quickly and masters challenging terrain by relying on its vision and a small onboard computer, said the researchers.

The CMU and UC Berkeley team trained the robot with 4,000 clones of it in a simulator, where they practiced walking and climbing on challenging terrain. The simulator's speed allowed the robot to gain six years of experience in a single day.

The simulator also stored the motor skills it learned during training in a neural network that the researchers copied to the real robot. This approach did not require any hand engineering of the robot’s movements — a departure from traditional methods.

Most robotic systems use cameras to create a map of the surrounding environment and use that map to plan movements before executing them. The process is slow and can often falter due to inherent fuzziness, inaccuracies, or misperceptions in the mapping stage that affect the subsequent planning and movements.

Mapping and planning are useful in systems focused on high-level control but are not always suited for the dynamic requirements of low-level skills like walking or running over challenging terrains.

The new system bypasses the mapping and planning phases and directly routes the vision inputs to the control of the robot. What the robot sees determines how it moves. Not even the researchers specify how the legs should move. This technique allows the robot to react to oncoming terrain quickly and move through it effectively.

Because there is no mapping or planning involved and movements are trained using machine learning, the robot itself can be low-cost, said the researchers. The robot the team used was at least 25 times cheaper than available alternatives. The team’s algorithm has the potential to make low-cost robots much more widely available.

“This system uses vision and feedback from the body directly as input to output commands to the robot's motors,” said Ananye Agarwal, a CMU Ph.D. student in machine learning. “This technique allows the system to be very robust in the real world. If it slips on stairs, it can recover. It can go into unknown environments and adapt.”

This direct vision-to-control aspect is biologically inspired. Humans and animals use vision to move. Try running or balancing with your eyes closed. Previous research from the team had shown that blind robots — robots without cameras — can conquer challenging terrain, but adding vision and relying on that vision greatly improves the system.

The team looked to nature for other elements of the system, as well. For a small robot — less than a foot tall, in this case — to scale stairs or obstacles nearly its height, it learned to adopt the movement that humans use to step over high obstacles.

When a human has to lift its leg up high to scale a ledge or hurdle, it uses its hips to move its leg out to the side, called abduction and adduction, giving it more clearance. The robot system Pathak’s team designed does the same, using hip abduction to tackle obstacles that trip up some of the most advanced-legged robotic systems on the market.

The movement of hind legs by four-legged animals also inspired the team. When a cat moves through obstacles, its hind legs avoid the same items as its front legs without the benefit of a nearby set of eyes. “Four-legged animals have a memory that enables their hind legs to track the front legs. Our system works in a similar fashion”  Pathak said.

The system’s onboard memory enables the rear legs to remember what the camera at the front saw and maneuver to avoid obstacles.

“Since there’s no map, no planning, our system remembers the terrain and how it moved the front leg and translates this to the rear leg, doing so quickly and flawlessly,” said Ashish Kumar a Ph.D. student at Berkeley.

The research could be a large step toward solving existing challenges facing legged robots and bringing them into people’s homes. The paper “Legged Locomotion in Challenging Terrains Using Egocentric Vision,” written by Pathak, Berkeley professor Jitendra Malik, Agarwal and Kumar, will be presented at the upcoming Conference on Robot Learning in Auckland, New Zealand.

Exyn and Trimble Outfit Spot Robot With Scanning, Mapping Systems for Construction Industry
The companies said they provide customers with the tools they need to create detailed maps for construction tasks.

DEEP Robotics Releases Jueying X20 Quadruped Robot for Hazard Detection and Rescue
China-based DEEP Robotics claims to be a leader in legged robotics for emergency and other uses.