Autonomous truck software-as-a-service company will be valued at $4.55B as it continues commercialization efforts. 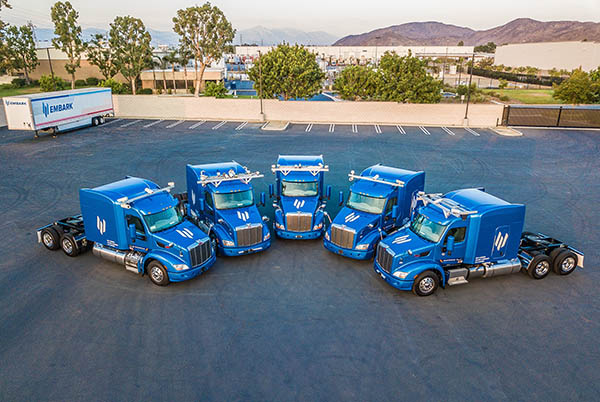 Embark Trucks
Embark Trucks has designed its autonomy software-as-a-service offering for the $700B U.S. trucking market.
By Robotics 24/7 Staff
·

The drive toward autonomous freight continues, as self-driving software provider Embark Trucks Inc. and special-purpose acquisition company (SPAC) Northern Genesis Acquisition Corp. II today announced that they have agreed to a merger that will lead to Embark becoming a publicly listed company.

“We have been solely focused on solving the problem of self-driving software for trucking since Embark’s CTO, Brandon Moak, and I founded the company in 2016,” stated Alex Rodrigues, co-founder and CEO of Embark. “This singular and disciplined focus on the trucking market in the United States has allowed Embark to achieve many industry-first technology milestones – including the first self-driving truck to drive coast-to-coast – and positions Embark to be a leader in autonomous trucking software.”

Embark said its platform-agnostic approach is underpinned by the Embark Universal Interface, a set of standardized self-driving components and flexible interfaces to allow major truck OEMs to easily integrate its self-driving technology with their vehicles.

The company also partners with shippers and carriers as part of its Partner Development Program to provide an end-user voice and advise on the integration and scaling of autonomous trucks within their supply chain and fulfillment networks. Embark claimed that it has driven more than 1 million real-world miles without a U.S. Department of Transportation-reportable incident.

“The recent accomplishment of key technical milestones – including handling highway workzones on the fly – and the announcement of our Partner Development Program mark the start of Embark’s transition from research to commercialization,” Rodrigues said. “After many years of R&D on the world’s most mature self-driving truck software stack, we plan to enable carrier operation of self-driving trucks in the U.S. Sun Belt beginning in 2024. Following the transaction with Northern Genesis, we expect to have a war chest that fully funds this commercialization plan, and then some.”

The transaction reflects an implied pro forma equity value of $5.16 billion and enterprise value of $4.55 billion, according to Embark and Northern Genesis.

Upon closing, the combined company is expected to receive approximately $614 million of gross cash proceeds, including about $414 million of cash held in the trust account of Northern Genesis 2, assuming no redemptions by NGAB stockholders, and a $200 million fully committed public investment in private equity (PIPE) at $10 per share.

The boards of directors for both companies have unanimously approved the proposed business combination, which is expected to be completed in the second half of 2021, subject to approval by Northern Genesis 2’s stockholders and other customary closing conditions such as U.S. Securities and Exchange Commission approval.

“The Northern Genesis team is enthused to partner with Embark as it continues to execute on its focused mission,” said Ian Robertson, director and CEO of Northern Genesis 2. “Our respective teams share a conviction that success today demands alignment with the ongoing secular shifts towards sustainability and social responsibility; Embark’s commitment to autonomous trucking delivers that alignment through enhanced fuel efficiency, improved driver working conditions, and safer roads for everyone.”

Embark Trucks
Embark Trucks has designed its autonomy software-as-a-service offering for the $700B U.S. trucking market.