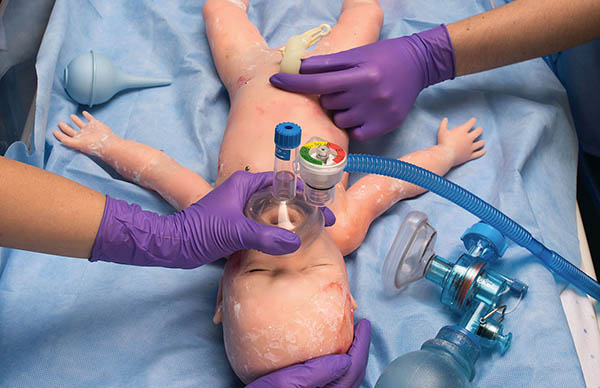 While most humanoid robots are still at an early stage of development, one subset is already reducing medical errors. Gaumard Scientific Co. makes several realistic systems used for training emergency responders, military field medics, and obstetricians and gynecologists. A recent study found that such simulation can reduce malpractice claims by 50%.

“Gaumard is committed to continuing our work in designing astonishingly lifelike patient simulators by combining cutting-edge engineering with our clinical expertise to satisfy the educational needs of educators and learners,” said James Archetto, vice president of U.S. direct sales at Gaumard. “With COVID-19, simulation training has often been the only training available for some students and medical professionals.”

“We make high-fidelity robotics patient simulators designed to enhance educational outcomes for doctors, nurses, military, and healthcare providers,” Archetto told Robotics 24/7. “In the old days, they'd have to train on each other or on live patients.”

“Now, our robots are so sophisticiated, they can reproduce human physiological responses,” he explained. “We have an adult female robot that delivers a baby and a 5-year-old that can talk, make facial expressions, and cry real tears. It creates a more immersive environment so students are in clinical mode.”

In 2017, Gaumard said its Super TORY system was “the first newborn simulator developed to meet the challenges of neonatal care specialists training in real environments.”

In 2018, the Pediatric HAL was the “first [robotic patient] capable of simulating lifelike emotions through dynamic facial expressions, movement, and speech,” claimed the company. In addition, Gaumard supplies the SUSIE childbirth torso and ZOE gynecological trainer.

“One of the benefits of simulation is that we can reproduce high-risk, low-frequency complications over and over until the learner gets it right,” Archetto said. “They may occur only once or never in training, but our robots enable repetition until the learner develops the 'muscle memory' for how to respond.”

“When we think of how we develop these simulators, they need to be visually realistic, but it's most important to be clinically relevant,” replied Archetto. “A clinician should be focused on the clinical response and outcomes—chemistries, blood pressure, respiratory rate. Crying tears is also important, because children don't always communiate verbally. The learner has to gain clues from observing.”

“I once asked a first responder about the realism of Pediatric HAL,” he recalled. “He said, 'It's critical. When I go into a home for the first time because I've been called in an emergency, I look around room for five seconds. If I see a 5-year-old, I catch his eye and need to see what's taking place. I can get a lot of information from his expression—grimaces, crying, blinking, movement of the mouth.'”

Not only can Gaumard's systems provide facial expressions, but they can also provide readings to actual diagnostic equipment, Archetto said.

“The learner can put real pulse oximeter and get a reading of oxygen saturation and use real EKG with our simulators,” he said. “The robots generate signals that look exactly like a patient EKG, and we simulate a normal sinus rhythm, atrial fibrillation ... ventricular tachycardia, or myocardial infarction. We can program those waveforms, and the learner can put on EKG patches just as on a real patient. The simulators can be ventilated, and we can change the response as needed.”

“They're controlled wirelessly by tablet,” added Archetto. “This removes the educator from the learning experience to observe. We can control everything to add to the realism.”

“Also, emergencies don't always happen in a hospital,” he said. “You could be attending to a child in playground, or a baby could be born in car on the way to the hospital. Our tetherlesss, battery-powered simulators can run for hours, anywhere.” 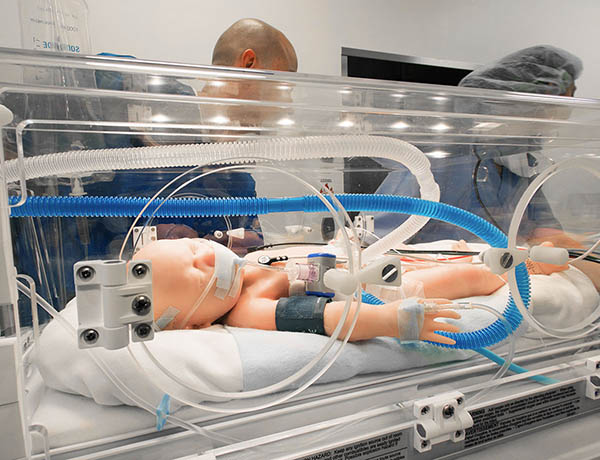 While the use of simulation in medical training was increasing before COVID-19, the pandemic accelerated the rate of change, said Archetto.

“Normally, students gather around a real patient, but they had to be socially distant,” he said. “At the same time, if only critical personnel are allowed in hospitals, how can students gain experience without contact with patients?”

“In a dedicated simulation center, the educator can be hundreds of feet away, and the students can go into a specific scenario,” Archetto said. “Now, their classmates can be learning via videoconference. The National Nursing Board allows 50% of clinical time to be spent in simulation to gain competency.”

In addition, the ability to simulate respiratory problems gained urgency.

“We've had lung compliance and resistance for some time now, but it was vital during the pandemic,” said Archetto. “We didn't actually change anything, but the way the robots were designed proved instrumental in helping people understand. It turns out these components—lung functionality, wireless control, and tetherless power—helped.”

“Hospitals and schools got educational grants through the CARES Act, and they were looking for different ways of training,” he said. “With the influx of patients in critical-care and intensive-care environments and not enough healthcare personnel, there was a lot of cross-training. Facilities had to train nurses on the medical/surgical floor for critical care or ICU. We've spent quite a bit of time learning the specific needs of patients in respiratory care and pulmonologists.”

Researchers at CRICO/Risk Management Foundation of the Harvard Medical Institutions, Brigham and Women's Hospital, Harvard Medical School, and the Center for Medical Simulation studied malpractice claim rates. They compared rates before and after simulation for 292 obstetrician-gynecologists who were insured by the same malpractice insurer and attended one or more simulation training sessions from 2002 to 2019.

The researchers recommended continued simulation training for OB-GYNs. Their findings were published in Obstetrics & Gynecology, a peer-reviewed journal, in August. 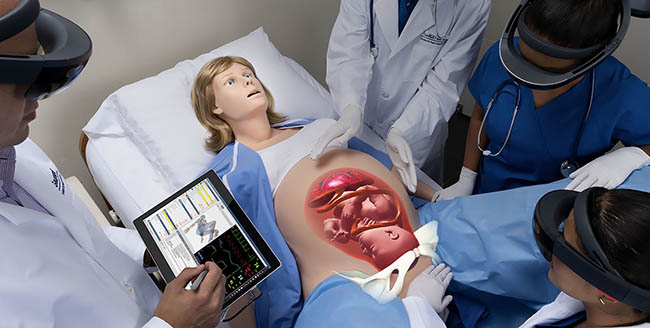 Looking ahead with mixed reality

“We found that learners are curious to learn more about complex clinical conditions,” Archetto said. “When a baby is being born, what's happening in utero before? If we could visualize that, we could combine it with the actual delivery simulator.”

“While there are many augmented and virtual reality [AR and VR] systems, they're cartoonish, and there's no interaction between the learner and the simulated patient,” he said. “We thought about how could we merge the virtual and real world. It's not just augmenting, which is why we call it 'mixed reality.' With the HoloLens, users can see inside of VICTORIA and see cardinal movements of the baby in utero.”

“Obstetricians can address all complications, such as the umbilical cord getting twisted or the baby's shoulder getting caught on the mother's pelvis,” noted Archetto. “They can all be digitally visualized with the Obstetric MR.”

“What if the obstetrician isn't able to resolve a condition, then the mother would need to go into surgery,” he added. “We even have simulation for C-sections. With polymers, we've created and abdominal wall with skin, adipose tissue, fascia, muscle, and synthetic blood in the uterine wall. During practice, the incision depth is vital—there's a baby on the other side—so simulation allows the physician to practice safely.”