The International Federation of Robotics has released its annual report on global robotics shipments from 2020, and it expects strong growth to continue despite the pandemic.

International Federation of Robotics
IFR members reported installations of both industrial and service robots for 2020.
By Eugene Demaitre
·

Despite the COVID-19 pandemic, sales of industrial robots grew in 2020, reported the International Federation of Robotics today. The number of robots operating in factories worldwide increased by 10% to a total of 3 million, according to the World Robotics 2021 Industrial Robots report.

Sales grew a mere 0.5% last year, with 383,500 units shipped globally. The growth in China offset the contractions of other markets, said the IFR. The past year was the third most successful year in history for the robotics industry, following 2018 and 2017.

Annual turnover of robots was more than $50 billion last year, including software and peripherals but not autonomous vehicles, drones, or business-process automation, said Milton Guerry, president of the IFR and president of Schunk USA.

China remains the largest market for robotics, and South Korea has the highest robot density, or number of robots per 10,000 human workers, according to the IFR. Some countries, such as Singapore, Sweden, and Denmark, have a relatively high rate of automation but smaller populations, noted the Frankfurt, Germany-based nonprofit organization.

“Two main industries were affected in 2019,” said Dr. Susanne Bieller, general secretary of the IFR. “In automotive, there were fewer new vehicles, and the electronics industry experienced lower demand, postponing installations.” She also noted that “political headwinds” between the U.S. and China delayed robotics investments.

“We don't expect a long-term decline,” added Dr. Christopher Müller, director of the IFR's statistical department. “Automakers already have a high degree of automation. We are in a transitioning process to electric vehicles. Battery-driven vehicles may have fewer components, but the main jobs of robots are still welding chassis and moving heavy parts. We also have battery production, which is something where robots are crucial.”

“The level of installations has been climbing over the past decade,” he said. “There was slowed growth in electrical, but increases nearly everywhere else.” 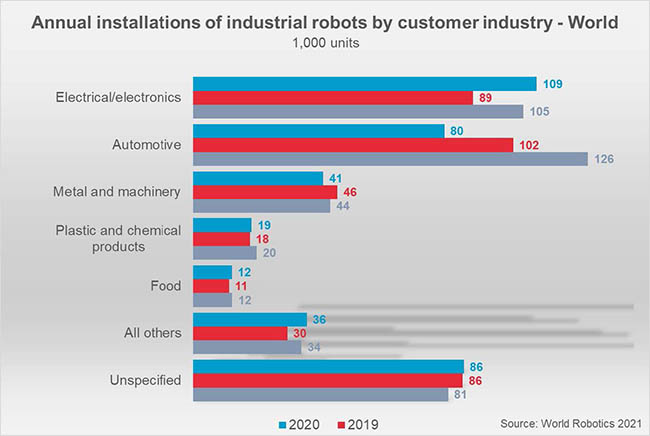 The IFR's 350-page World Robotics 2021 reports for industrial robots and service robots can be ordered online.

See the slideshow (top right) for noteworthy robotics trends in this year's reports.

International Federation of Robotics
IFR members reported installations of both industrial and service robots for 2020.

Belgian Traditional House Provides Tourist Attraction With Low-Cost Automation From RBTX
Who says automation has to be expensive? In Bruges, Belgium, the chocolate shop Roose’s Chocolate World has a robot...

5 Things to Consider Before Creating an Automated Vehicle System
Are you considering offering your customers an automated forklift or tow tractor? Vehicle automation could open a new revenue stream.

Flexible Palletizing System for a Labor Constrained World
What if you could get away from that large, centralized palletizer fed by a maze of fixed conveyor that too...
More Automation