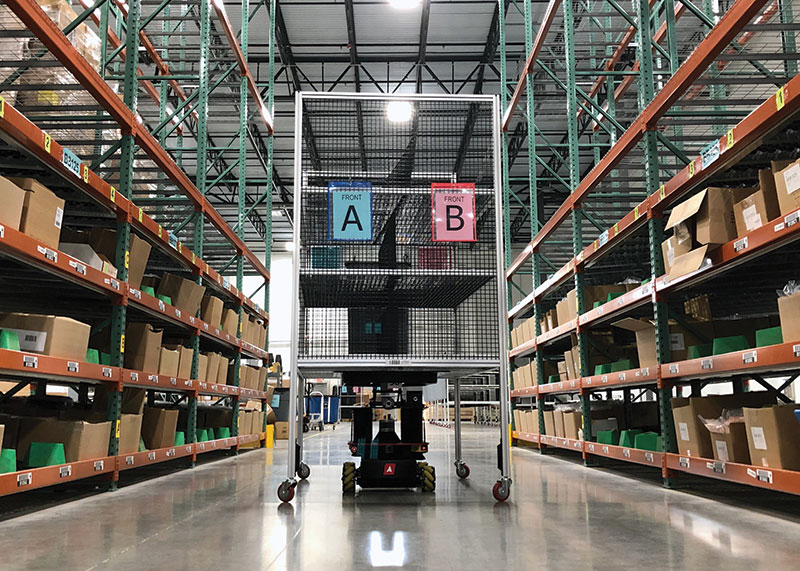 In doing so, NorthShore’s brand has undergone significant expansion, as the company has grown by more than 30% annually during the last three years. With this extensive growth in mind, the timing was right to make proper investments, which would allow for scale down the road.

One such investment was a move into a new 173,000-square-foot facility. However, just as the company was beginning to settle into the new facility, COVID-19 brought an unprecedented demand surge, as some shoppers decided to purchase 6 to 12 months of supplies in advance.

Since NorthShore distinguishes itself with same-day shipments, it focused on automation as a means to meet demand peaks, while also maintaining accuracy at the highest level. Overall, NorthShore wished to improve speed, accuracy and safety, as it also minimized potential fulfillment issues with demand swings.

To accomplish these goals, NorthShore implemented autonomous mobile robots (AMRs), along with a warehouse execution system-warehouse control system (WES-WCS) Advanced RDS voice picking system, to multiply output while also retaining its valued, existing workforces. In addition, AMRs were deployed to pick up high-capacity custom carts, which workers now use for picking, as the flow is optimized by the software system.

The voice-picking system at the facility enables NorthShore’s order management system to sync between voice headsets and robots. This directs the AMRs to drive the carts around the warehouse and transport them from the pick aisles to the pack stations without slowing down the pickers. As a result, pickers can remain in a certain pick aisle, while robots will continue to appear at their respective location until all of the orders are depleted at that location. The carts can carry 28 orders—and up to 700 pounds—while the AMRs autonomously charge at nearby wireless charge stations.

NorthShore has already noticed measurable results in less than 2 months. The whole layout—with optimized replenishment, receiving, picking, packing, put away and cycle counting—has resulted in a considerable improvement in efficiency, as outbound boxes per labor hour have risen twofold. And, as NorthShore workers continue to optimize their picking, packing and automation processes, they expect to notice further improvements in the future (by possibly 25% to 50%).

Social distancing has been a secondary benefit during the pandemic. By moving to AMRs with voice, only one picker per zone (at a time) is necessary. And, since carts do not need to be handled by people as they’re dragged up and down pick aisles, touchpoints have been greatly reduced within the warehouse, leading to a reduction in the need to clean and sanitize, a diminished risk of possible contamination and increased safety for employees.

Waypoint Robotics
Waypoint Robotics develops and manufactures fully autonomous mobile robots that are easy to use, industrial strength, and designed to be setup and used by the workforce that is on the job today. Vector, MAV3K, and supporting products can be put to work immediately, adds to workers...