Odense, Denmark, which claims to be Europe's robotics capital, will hold its eighth Odense Investor Summit in March 2022. 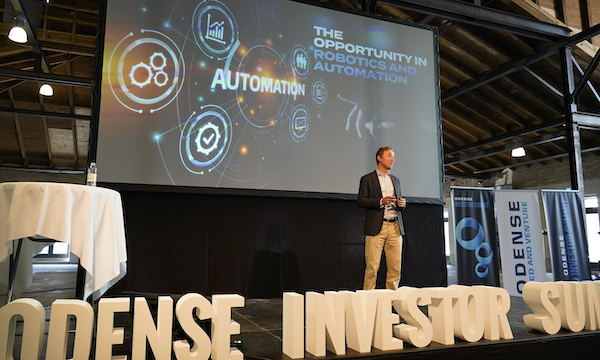 Odense, Denmark, is one of the top robotics clusters in Europe, and indeed the world. The city is home to collaborative robot leader Universal Robots, mobile robot provider Mobile Industrial Robots, and numerous other startups. At this year's Odense Investor Summit, which will be on March 24, 2022, 15 technology companies will present their automation inventions to 300 investors.

Based on the success of the past seven summits, more than half of the attending startups will find capital at the matchmaking event, according to the event's organizers. As robotics and automation spread into more industries, investors are increasingly interested in seeking “golden eggs” or “unicorns.”

The summit will be held in Denmark at the same time as the R-22 robotics trade fair. It will include keynotes, presentations, and discussions around robots, drones, and pitch sessions.

In Odense, children as young as 3 years old are experimenting with robot technology. The municipality of Odense is the organizer of the Odense Investor Summit and has worked to attract startups, investors, and robotics talent from all over the world.

“In Odense, the key elements to a thriving robotics industry are united: economy, expertise, capacity,” said Peter Rahbæk Juel, mayor of Odense. “Investors in the fields of automation and robotics come here to access the most promising investment opportunities and to learn about the latest trends in the market, incited not least by the event of Odense Investor Summit.”

“Visitors are impressed by the way in which members of our local ecosystem seek out coopetition and know-how from one another,” he added.

Investors have pledged more than EUR 860 million ($976 million U.S.) to robotics startups in Odense, according to the summit's organizers.

One company that raised capital at the event in 2021 was Mobile Coalescent Robotics, whose founder and CEO is Clionadh Martin. He is originally from Ireland but chose to move to Odense to establish his robotics company, which has developed a system for transporting goods in staple goods stores.

“The willingness to risk investing capital is based on the building of relationships,” said Martin. “It means you have to be physically present. The Odense Investor Summit is the obvious venue when you want to meet investors with insight into the robotics industry.”

“The robotics environment in Odense is unique, and I believe everyone can see the potential in the companies based here,” said Krog Iversen. “Being part of Odense Robotics has become a stamp of approval recognized worldwide.”

“As a founder and an investor myself, I have experienced first-hand the impressive capabilities of this ecosystem,” he said. “By investing knowledge and capital in the new robotic startups, we are building a strong robotic community.”

Many Danish robotics companies have followed a similar recipe for transforming an idea into commercial success, said the Odense Investor Summit organizers. The country has more than 50 educational programs, in which researchers and students closely collaborate with robotics companies and end users to develop new solutions to automation challenges.

New robotics companies can take advantage of offices in the Odense Robotics Startup Hub. The incubator claimed that its startups have a survival rate of 80%. Resident companies can also gain access to entrepreneurial associations such as Visti Unlimited.

Drone technology companies can have their main offices in a drone airport via UAS Test Center Denmark. The municipality of Odense said that startups will have good access to capital.

In addition, robotics companies and end users have many opportunities to exchange information, as facilitated by organizations and networks such as the Danish Industrial Robot Association (DIRA), Odense Robotics, the Manufacturing Academy of Denmark (MADE), the Danish Automation Society (DAU), and the Danish Technological Institute (DTI).

Teradyne president to give keynote

Greg Smith, president of the Industrial Automation Group and president of Teradyne, will be one of the keynote speakers at the the Odense Investor Summit.

“With the acquisition of Universal Robots in 2015, we saw the potential of Odense in the field of robotics,” he said. “In 2018, we acquired Mobile Industrial Robots and reaffirmed our commitment to Odense as an important center for research into robotics.”

“Since 2015, we have been a constant in Odense’s ecosystem and we have been excited to witness the growth of the robotics community, which is constantly proving its capability to commercialize technology,” noted Teradyne's Smith.